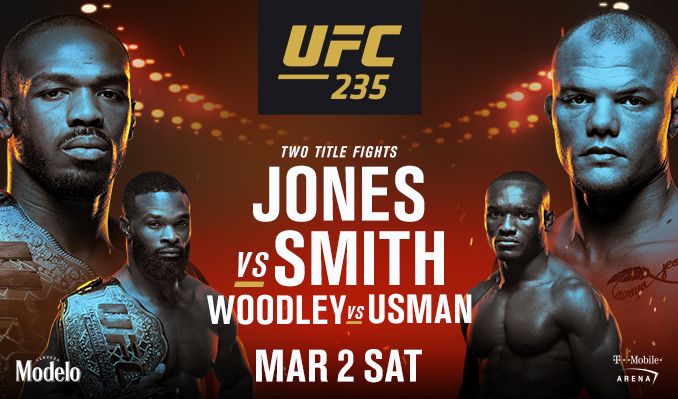 Check out our UFC 235 live coverage featuring Jon Jones vs Anthony Smith in the main event.


UFC 235 is a very strong card, with a glorified squash match in the main event. Maybe Jon Jones will toy with Anthony Smith for a bit, but when it comes to talent level, this may have the most talent discrepancy from any major title fight in UFC history.

On the prelims, Johnny Walker did this.

And then he hurt his shoulder trying to do the worm.

Garbrandt threw a kick that was caught and he nearly was put in a knee bar right at the start of the fight. Munhoz landed a few leg kicks and Garbrandt isn’t dealing with them very well. Garbrandt caught him and Munhoz stumbled. Garbrandt followed and looked like he was going to finish. Munhoz started to trade even though it looked like he was getting the worst of it. And then he blasted Garbrandt with a huge shot and followed up on the ground to stop it.

That was a strong and close first round. Both women are very strong for their size and it’s almost even there. Torres is landing a right hand in close quarters. Zhang landed a sweet left hook. Torres got a late takedown, but Zhang ended up on top in a nice struggle.

Torres had the top position late in the round, though didn’t really land a ton in that position. They had some nice trades early in the round. Zhang is sneaking in the left when Torres comes forward.

They had a great trade of punches and Zhang kind of got turned around and Torres hit her with a couple of nice punches. Mid-way through, Zhang strong-womaned her down for a takedown and ended up on top of her for the rest of the round. Zhang should win this one.

Askren jumped on Lawler early and Lawler caught Askren high on his shoulders and slammed him like it was a shoot Attitude Adjustment. Askren looked like he was done. He weathered the Lawler storm and started pushing Lawler back up against the cage. Lawler was so worried about getting taken down that he stopped his offense. Lawler went for a rear naked choke and then had a side choke. Lawler looked to be going out and Herb Dean stopped it. When it was stopped, Lawler jumped up like he wasn’t out. His arm went limp.

Winner: Ben Askren by way of 1st round submission

I am corrected. Lance said it was more like a DVD.

That’s actually a lot closer to what the original Death Valley Driver looked like than what guys do today as the move.

Woodley had a guillotine attempt and Usman ended up on top of him. Usman is pushing Woodley and forcing him into uncomfortable positions, out-wrestling him even. Fairly easy round for Usman, though neither guy did any real damage.

Usman is dominating Woodley at his own game here. He scored a takedown and just owned Woodley on the ground. Prior to the takedown, he hit him with a beautiful elbow. This might be a 10-8 round.

Woodley finally threw the right hand, but he missed. Usman walked him toward the back of the cage and they clinched. He punched him in the ribs about 15 straight times. They were separated and basically, the same thing happened again. Woodley has no answer and interestingly, he almost looks complacent in getting beat up. Woodley finally landed one right hand which made Usman stumble a bit, but otherwise, he did nothing.

Usman decided to go for it in the fourth. He was clearly winning the round and then tried to stop him and punched himself out. It looked like Woodley was going out, but he withstood the punishment and Usman was just as tired as he was. Usman just needs to finish this round and he has an easy victory.

Woodley had a tired guillotine in and Usman slammed him to the ground. This is going to be one of the widest championship fights in UFC history. Woodley did nothing. Usman wins an easy decision.

Jones is fighting left-handed. He landed a spin kick. Smith landed a leg kick. Smith missed a head kick and Jones caught his leg and pushed him up against the cage. Jones landed a side kick. According to Dominick Cruz, when Smith switches to southpaw, it opens his body up for Jones’ kicks.

Jones started opening up with kicks and then blasted him with a spinning back elbow. The rest of the round was Jones picking Smith apart one shot at a time. It was a left hand then a right hand then a kick to the body. Easy round for Jones.

This is a pretty boring fight because Jones isn’t taking any chances, but Smith can’t stop him doing anything. Jones can stop him anytime he wants, but he seemingly doesn’t want to take any chances here.

Jones brutalized him all round long, but committed two fouls, the second of which he was docked two points. Smith had one hand down and Jones threw a knee right at his head.

It was frustrating to not see Jones try and close the fight, but oh well, it’s Jon Jones.