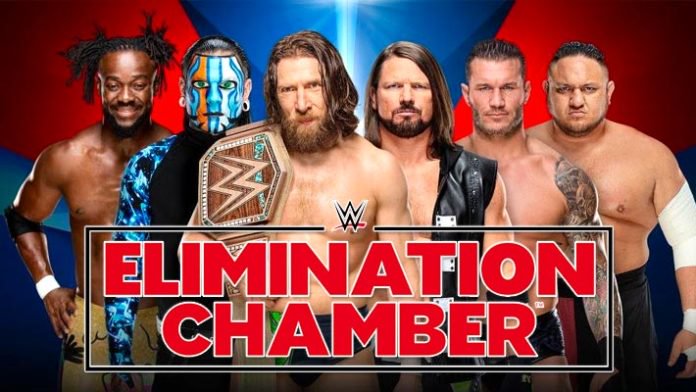 On the pre-show match, Buddy Murphy faced Akira Tozawa and beat him with Murphy’s Law.

Sonya and Mandy and Sasha and Bayley started the match. Liv and Sarah came out after the first five minutes. This match is a somewhat decently choreographed cluster. That’s the best I can explain it. It’s like synchronized swimming

The Iiconics are next and they’re cleaning house. Yes, the Iiconics. Naomi and Carmella came in next and the match picked up a bit. Though, still very much synchronized and less of a fight for a championship.

In the first fall, Billy Kay and Peyton Royce did a roll up combination pin on Naomi. That was cool.

Nia and Tamina were in last. The Iiconics back into the pod. They broke the Iiconics out of the pod and then hit double Samoan Drops on them for the pin. There are four teams left.

Morgan did a dive from the top of the cage onto Nia and Mandy while Sarah did the same on Sonya and Tamina. Tamina got them back by hitting a Superfly splash on both Liv and Sarah for the pin. Only three teams left.

Nia tried to spear Bayley through the pod door, but Bayley moved and Nia ate the whole door. All of the four women on the other two teams helped pin Tamina. Only two teams left and they’re the first two teams in the cage.

Bayley hit the Bayley to Belly after Sasha hit the backstabber and Mandy was too late on the save so Sonya had to kick out.

Mandy hit her finisher and Sasha kicked out. That was a solid nearfall. Sasha tapped out Deville with the Banks Statement to win.

Match picked up in the last 5 minutes or so.

Miz and Maryse announced that they’re having another kid.

The Miz and Shane McMahon Vs The Usos

This match was all kinds of bad early on. Shane got the hot tag and started going crazy including hitting (or missing but hitting) some sort of axe kick that looked all kinds of terrible. He hit the Coast To Coast on Jey and then tried to do the same to Jimmy but got superkicked. He ate a big splash from the top, but Miz saved him.

They set up Jey on the announcer’s table and Shane did the flying elbow from the top rope to the outside and it was a hard crash and burn. Didn’t look fun to take or give.

Back in the ring, Miz got his knees up on a Jimmy dive from the top. Miz hit the Skull Crushing Finale and Jimmy rolled him up as part of his kick out and the Usos are the new tag champs.

This wasn’t that good. Story of the match is that when Lashley was in, he was dominating Finn. But when Rush wanted to tag in, Finn hit the Coup De Grâce on Rush to win.

Lashley tried to pretend he was mad and then beat up Rush.

Charlotte came out to cut a promo before Ronda’s match. She’s sitting ringside.

This was a Ronda squash match. She was dressed like the video game character Sonya Blade. She quickly dismantled Riott with the Piper’s Pit and the arm bar.

Charlotte came into the ring. Becky came down to ringside with her crutches. Becky went to hit Charlotte with her crutch and started wailing on her. She then started hitting Ronda with the crutch too. Ronda got busted open.

This was set up for Strowman to get triple teamed by Corbin, Drew McIntyre, and Bobby Lashley. They stacked two tables on top of each other and gave Strowman the Shield Powerbomb.

Daniel Bryan and Samoa Joe start the match. Kofi came in third. Bryan perched himself on top of the pod and Kofi catapulted himself up by springboarding himself from the top rope to the top of the pod.

Fourth entrant is AJ Styles. Kofi nearly pinned Joe again after running himself to the top rope while being in the Coquina Clutch and then pushing himself backward. But Joe got hit with a Phenomenal Forearm and was pinned.

We’re down to five. Hardy is the fifth entrant. AJ was perched on the top rope and Hardy jumped from the top of the pod with a Swanton on him. Then Bryan hit the flying knee on Hardy for the pin. Before Orton even comes in, we’re down to four.

Orton is now in and the match is on. AJ was going to hit the Phenomenal Forearm and Randy caught him before he jumped and hit the RKO. AJ is gone. It’s down to three. Kofi hit the Trouble In Paradise on Orton to get to the final two.

Kofi hit the SOS on Bryan for a nearfall. Kofi hit the pod as he was trying to bulldog Bryan into the pod. Bryan hit the running knee and he kicked out. Bryan stomped him in the face a few times. Kofi kicked out again. Bryan went for the knee and Kofi hit the Trouble In Paradise, but Bryan rolled him up for a two count. Kofi dove off the top of the pod and missed and Bryan hit the knee for the win.