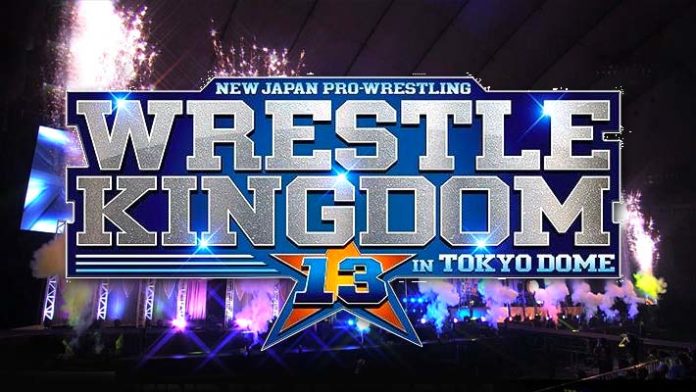 Check out our Wrestle Kingdom 13 live play by play.

Yes, we’re staying up all night to watch Wrestle Kingdom 13. We’ll be back for the start of the pre-show, which is the gauntlet match to determine the number one contenders to the NEVER Openweight 6-Man Tag Team Championship. The title match will happen on New Year’s Dash.

We’ll be back for the start of the show.

The first team out is Hangman Page, Yujiro Takahashi and Marty Scurll. The second team out is David Finlay, Jeff Cobb, and Yuji Nagata. Lots of stuff with Page and Cobb with Cobb taking the shooting star block to the floor and the Buckshot clothesline. Finlay rolled up a distracted Yujiro for the pin. There was some frustration from Team Elite.

The third team out is Chuckie T, Beretta, and Hirooki Goto. Goto and Cobb are doing some fun power stuff. Cobb backsuplexed both Best Friends. Chuckie T missed a moonsault and Finlay rolled him up for the pin.

The fifth team out is Ryusuke Taguchi, Toru Yano, and Togi Makabe. Yano lowblowed both KES guys and pinned Davey Boy to win the match for his team.

Will Ospreay Vs Kota Ibushi

I’m not sure the crowd is quite ready for this match yet, but these guys are working their asses off. They are almost mirror images of each other athletically. Ibushi is bleeding from his nose. Ospreay went for the Oscutter, but Ibushi blocked it. They did their slow staredown like during the tag team match.

Ibushi did a Gotch tombstone piledriver. It looked awesome. Ospreay threw an elbow to the back of Kota’s head that looked nasty. Ospreay hit the Stormbreaker to win the match.

They stretchered out Ibushi. Either he was legit knocked out, or they’re selling that he was. They made it look he was dead weight when Ospreay got him up for the finish.

This wasn’t a very long match. Wasn’t long enough to really get good. Sho lost to the Last Dragon.

Really good start to this match, though Ishii hit a superplex on Zack only for him to hook Ishii’s legs as if he was going to pin him and then he hit him with a move before selling the superplex after. That’s one of John LaRocca’s least favorite sells.

The Young Bucks Vs Evil & Sanada Vs Guerrillas of Destiny

For some reason, Tama is trying to portray himself as a good guy. He stopped Tanga Loa from breaking up Matt Jackson’s Sharpshooter. That was weird.

Sanada did four springboard dives over the top rope in a row onto guys, which was fun.

The Bucks went for an Indy Taker or a Meltzer Driver, but as Nick jumped off the top rope, Tonga hit a Gun Stun. Sanada hit a moonsault on Matt to win the match after a Magic Killer.

Early in the match, Cody teased that he blew out his knee, only to fake out and outsmart Juice. Juice went to the top rope and Brandi covered Cody so he wouldn’t dive on him, like she did in the match with Magnus.

Cody nearly bumped the ref, but when he did, Brandi came into the ring and speared Juice with her bionic collarbone. She went for some ground and pound, but was kicked out of the match.

Cody hit a Cross Rhodes. He went for a Din’s Fire, which just looks like a Vertebreaker to me. Juice blocked it and then hit his own Cross Rhodes.

Juice hit Cody with two big left hands and then a Pulp Friction. He paused and then hit another to pin him.

Ishimori hit a sweet sliding German on Kushida as he slid underneath the bottom rope. He went for a 450 from the top rope and Kushida caught him and went for an armbar. That was slick.

The last two matches were okay, but they picked up the speed here with this one. Lots of great counters and Kushida was fire.

Kushida hit the Back To The Future, but then missed a second and landed a great right hand. Ishimori hit him with the Bloody Cross and the pin which was a bit abrupt. I think they needed another 2-3 minutes, but it was still good.

I think we have six title changes in a row.

The undercard was a bit rushed and it feels like this is the official start of the show. Okada went back to the tights and the old entrance. Fans popped hard for that.

Okada dumped White and Gedo over the rail and then did a dive on both of them. He tried the Rainmaker, but it was blocked. He blocked White’s Blade Runner.

Okada was able to avoid the Blade Runner and there was a great set of reversals which finished with Okada hitting a clothesline and seemingly setting up a Rainmaker. But White hit a quick Blade Runner and pinned Okada.

Naito started hot and knocked Jericho out the ring twice, including knocking Jericho over the top rope with a clothesline. He went to dive out and Jericho hit him with a kendo stick.

They went outside and Jericho spike DDT’d him on those unforgiving Japanese tables.

Jericho had the Walls on Naito for awhile and Naito broke it up by hitting him right in the ear with the kendo stick. Naito started unloading on Jericho with kendo stick shots and swung it like a baseball bat. Jericho brought chairs into the ring, but Naito hit a DDT on the chairs and then a Code Breaker.

Naito was about to hit the Destino, but Jericho pushed Red Shoes into the ropes and he missed Jericho’s mule kick in Naito’s ball sack. He then hit a Code Breaker for a two count.

Naito hit a Destino, then a belt shot, and then another Destino for the three count.

The first 20 minutes of this match were very methodical. Omega dumped Tanahashi out over the rail and onto a table and then he did a moonsault off the rail onto Tanahashi.

At some point, Omega hurt his knee, which Tanahashi took advantage of. Tanahashi broke Omega down piece by piece.

Tanahashi put Omega on a table that Omega tried to set up earlier in the match and then set up a high fly flow to the outside. Omega moved and Tanahashi belly flopped right on the table.

Omega had Tanahashi on the top rope and he hit a dragon suplex off the top. He followed up with a V-trigger and tried to set up the One Winged Angel, but Tana got out of it and hit a sling blade. He then went to the top and hit a high fly flow for the win.