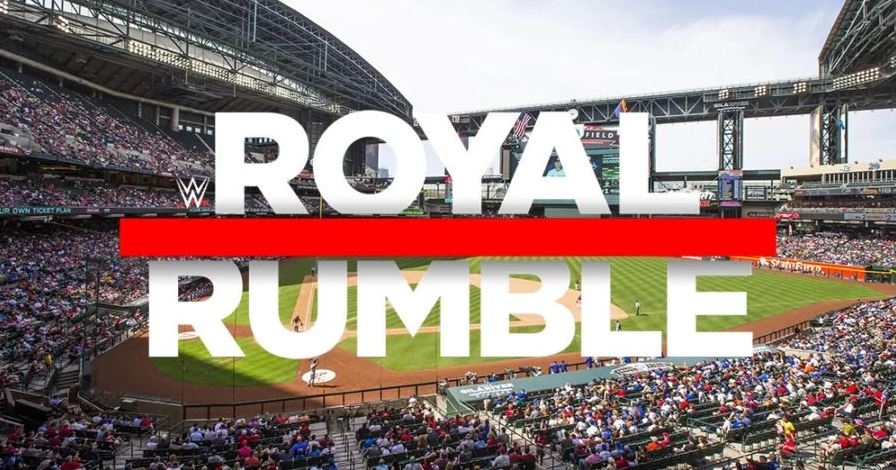 We’ll have Royal Rumble live coverage. Follow along with us!

The wrestlers will have to have their working boots on in order to beat last night’s NXT TakeOver: Phoenix show.

Rezar and Scott Dawson Vs Bobby Roode and Chad Gable

What an odd pairing this was.

Roode and Gable won with Gable’s moonsault off the top rope and onto Dawson, who Roode was holding in a facelock.

The match seemed put together very last second and as you can imagine, was sort of wrestled that way.

Lana got on the apron as Nakamura was trying to take off the turnbuckle pad. Nakamura got in her face and Rusev rushed him and Nakamura moved causing them to bump into each other. Lana took a bump and grabbed her ankle. Nakamura hit a version of the Kinsasha to the back of his head to win the match.

Akira Tozowa Vs Kalisto Vs Hideo Itami Vs Buddy Murphy

There was a cool spot where Murphy had Kalisto on his shoulders. Itami had his feet on the second rope. Tozowa dove underneath his legs and shoulder blocked Kalisto, who hit a hurricanrana on Murphy into the boards.

Murphy beat Itami with the Murphy’s Law in a really good match.

Asuka kissed the belt. The match is solid, but Becky is a step slow or something. She went for a reverse kick that she was supposed to miss anyway, but she didn’t come anywhere close. Asuka wants to have a great match and it feels like Becky isn’t able to match her.

They were both on the apron and Becky tried for the Becksploder to the side of the apron. Instead, they did what looked like the Cody Rhodes and Kota Ibushi CrossRhodes spot to the floor from Wrestle Kingdom 12. But it wasn’t nearly that graceful.

Asuka made her tap to win the match. The last two minutes were really good.

The Miz and Shane McMahon Vs The Bar

Shane jumped off the top rope for a clothesline on Sheamus and then ate a flying uppercut by Cesaro. Shane went for the coast to coast and Cesaro caught his legs and put him in the Giant Swing for 20 revolutions. Shane must be anti-dizzy as he immediately went for a triangle and locked it in. Sheamus dropped a knee on him to break it up.

Shane hit a shooting star press on Cesaro to win the match and the straps.

Winner: The Miz and Shane McMahon

Ronda screamed at the crowd who said she couldn’t wrestle. She got through two of the three amigos suplex.

Banks started working the right arm/elbow after Ronda rammed it into the post. Ronda tried to put Banks in her Piper’s Pit but Banks rolled her up and then put in an armbar and basically pulled her arms behind her head, stretching out her shoulders.

Banks hit a superplex and after Ronda kicked out, she went right back to the injured elbow. Ronda psyched herself up with some judo throws and went for the armbar, but Sasha kicked her out of the ring. She went for a dive out, which was the second one, and Ronda caught her and put her in an armbar, but it was out of the ring.

Banks went for the Banks Statement and used some of her gear to pull back on Ronda’s mouth. She then turned it into an armbar again. Ronda transitioned into a gutwrench suplex and then hit the Piper’s Pit into a near bridge cover and pin.

After the match, Banks flashed the four fingers at Ronda.

Lacey Evans is in at number one. Natalya is number two. And Lacey is nervous. Liv Morgan came in and Natalya dumped her out immediately. Mickie got dumped by Tamina. Xia Li from NXT came in at number 11. That wasn’t one I would’ve guessed. Both Iconics dumped out Nikki Cross. Lacey Evans dumped out both of the Iconics. Charlotte big booted out Xia Li. Charlotte also dumped out Tamina.

Naomi dumped out Mandi Rose and almost went out herself. She used her hands to stay in and then found her way to the barricade and jumped from the barricade to the steps. Then Mandi pulled her off. Ruby Riott and her Riott Squad are beating up everyone. Kacy Catanzaro was out but her feet didn’t touch. She scooted on her butt and then walked on her hands to climb up the post and come back in. But then Ripley tossed her.

Vega was underneath the ring and Hornswaggle showed up and chased her inside the ring. Ripley threw her out too and Swoggle chased him to the back. Lana came out for 28, but she’s hurt so she hasn’t made it to ringside. Nia came in and dumped Io and then Natalya. Natalya has been in there the longest in the history of the 2 year match. Becky came in for Lana and Fit let her go in the ring. Alexa Bliss finally dumped Moon. Moon was in there for over 50 minutes.

Final four is Bayley, Charlotte, Nia, and Becky. Bayley was on Nia’s shoulders and Charlotte hit a boot on Nia, sending Bayley out and over the top. Becky was outside the ring. Charlotte put Nia on her shoulders and put her on the apron. Becky pulled Nia out and she’s out. Becky was ready to get into the ring and Nia pushed her off and she hurt her knee. She came into the ring hurt and Charlotte immediately took advantage. Charlotte went for the big boot near the rope, missed, and Becky dumped her out.

Match is starting out nice and slow. AJ hit a great deep armdrag. He also busted his nose at some point. AJ also pulled out a near-Okada level drop kick.

Bryan gave AJ a great full nelson German suplex. Bryan had the LaBelle lock on and grabbed AJ’s nose. AJ did moonsault into a reverse DDT when they were out on the floor. That was sick.

They were standing on the top rope and Bryan was about to give him a back suplex from the top, but AJ flipped all the way over and Bryan fell backward. AJ then went to the Calf Crusher.

Styles went for the Phenomenal Forearm, but Bryan kicked his post arm. Erick Rowan came down to ringside for some reason that’s unexplained. Bryan accidentally kicked the ref. AJ got a Styles Clash on Bryan, but Rowan interfered and gave AJ a chokeslam. Bryan then pinned him.

Balor started out hot with two drop kicks until he got caught and ate a belly to belly suplex. They went to the outside and Finn pushed Lesnar into the corner of the announce table.

Brock was selling his core. He was having a hard time picking Balor up. He got him in the F5 but Balor turned it into a DDT. Finn then did three dives over the top rope and then hit the Coup de grâce for a two count. Then Brock put the Kimura on him and he tapped.

Elias is number one and he’s stalling for time so Jeff Jarrett could come down and interrupt him. They were going to sing together, but Elias jumped him and dumped him. Nakamura dumped out Kurt. Samoa Jones tossed out Big E. Elias couldn’t hang onto the post and Rollins eliminated him. Hawkins eliminated Titus and Joe eliminated Hawkins. Kofi’s spot this year was to keep his feet on the apron and barrel roll to the steps to come back in. Gargano ate a DDT and then was tossed by Dean. No Way Jose danced in the ring, got clotheslined by Joe, and danced back.

Kingston almost got tossed out again, but Woods saved him and his feet never hit the floor. They both got in and they were eliminated by Drew McIntyre. Aleister Black eliminated Dean Ambrose. Joe had Ali in the Kokina Clutch and Benjamin gave Joe a knee by running up Ali. Ali dumped him out. Corbin eliminated Crews. Corbin eliminated Black and McIntyre eliminated Dunne. Lashley came in and was immediately dumped. Then he pulled Rollins out of the ring and attacked him.

Baron Corbin was dumped by Strowman. Then he dumped Shelty B. Ziggler came in and superkicked McIntyre and threw him out. Nia beat up Truth and then came in to dump Nia. She’s tried to dump Rey, but got super kicked by Dolph and then RKO’d by Randy Orton. Orton and Rey tossed her out. Orton threw out Rey and Andrade dumped Orton.

Your final four is Ziggler, Andrade, Strowman, and Rollins. Strowman eliminated Andrade. Then he eliminated Ziggler. Rollins had Strowman going, but he couldn’t eliminate him. Rollins pulled him in a front facelock like Chris Benoit did Big Show. He got him on the apron. Then he rammed him into the post and gave him the Curb Stomp and Strowman went out.