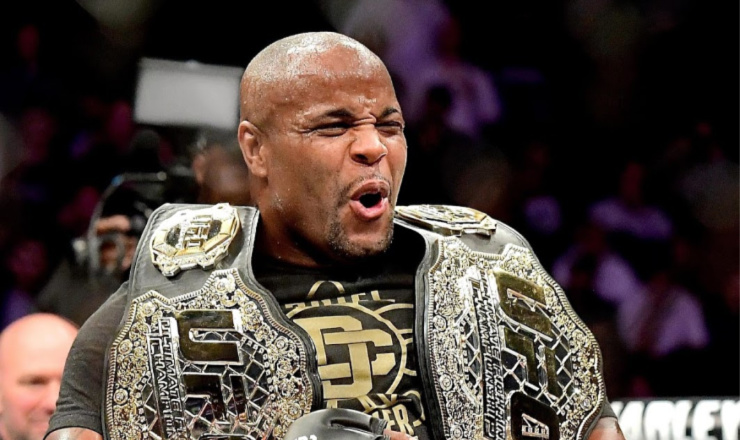 Welcome to our second set of this year’s FGB Awards, the 2018 MMA Awards.

You can check out our 2018 Boxing Awards.

Here are the categories for the 2018 MMA Awards:

In addition to myself and Duan (@DuanDub), we’ve added Stefano Summa (@SteSumm), Nick Mahmood (@HayabusaCT), and Brady Childs (@HPJoker) to our panel.

Duan: Daniel Cormier
Cormier finished the year as a deserving two weight champion and should probably go down as the best fighter of his generation.

Stefano: Daniel Cormier
DC takes this one from the hands of fellow AKA mate Khabib Nurmagomedov with a banner year in his career, first dismantling the Swiss hype train of Volkan Oezdemir, then interrupting the run of Stipe Miocic as heavyweight champion and finally entrenching his name in history even more by beating Derrick Lewis and becoming the first man in UFC history to defend two different titles in the same reign. It’s the best way to get a slam dunk induction in every MMA Hall of Fame (I’m sorry, I hate any GOAT discussion) and definitely remove the Jon Jones stench from his figure.

Nick: Daniel Cormier
DC fought three times this year, but his summer win over Stipe really was all he needed. The year before he was the light heavyweight champ but got booed and called the fake champ. He lost for the second time against Jon Jones, but Jones again failed for PED’s and DC was given back the title. In January, he came to the octagon in his defense against Oezdimir expecting boos, but the Boston crowd overwhelmingly cheered him. No matter how Jones & UFC would spin Jones’ test failures, the fans saw through it and realized just how great DC was. Moving back to heavyweight, and defeating the most successful heavyweight champion in history was finally the pinnacle his long career in sport. He ended the year by becoming the only defending two division champ with his win over Derrick Lewis.

Brady: Daniel Cormier
Cormier fought three times this year, all title fights and all decisive victories. He knocked out Volkan Oezdemir, defending his light heavyweight title and winning performance of the night, knocked out Stipe Miocic in his return to the heavyweight division and winning another performance bonus, and tapped out Derrick Lewis with a broken hand on short notice. It was the year where DC cemented himself this year as one of the all-time greats.

GG: Daniel Cormier
We’re making it a clean sweep here for DC. Jon Jones can decry his year because Jones was persona non-grata all year long, but we can only judge what happened inside the octagon. DC had an all-time great year for one of the best MMA fighters of all-time.

Duan: UFC 226
The one time this year UFC felt like it had its spark back.

Stefano: UFC 220
The opening big show from the premier promotion gave us great performances by two of the best in this sport (DC and Miocic), good stoppages (Alhassan, Font and Makhachev) and a barn burner of a fight in Calvin Kattar vs Shane Burgos. I’d argue UFC 229 could have been picked as well in this category, but the post main event melee overshadowed many of the good that card gave us.

Nick: UFC 229
The record setting PPV was the culmination of the bad blood between Khabib and Conor, but it was more than that. It had incredibly violent undercard with brutal finishes started the night, but the main card saw some incredible stuff. A storybook comeback from Lewis over Volkov, the coming out party for Dom Reyes, and a FOTY candidate with Ferguson and Pettis.

Brady: UFC 229
This show had everything – a stellar undercard, an incredible come-from-behind knockout, a bloodbath, a mauling in the main event, and an angle straight out of Memphis to cap off the show.

GG: UFC 229
I’m not taking this card for my choice because of the pomp and circumstance of Conor vs Khabib necessarily, though it helped. My favorite fight of the year, which you’ll see below, was also on this card. It had that big feel show. The one negative was that the promotion of it left a bad taste in your mouth.

Duan: Chris Weidman Vs Jacare Souza
A brilliant back and forth battle between two middleweight stalwarts in desperate need of a win to keep the show on the road.

Stefano: Justin Gaethje Vs Dustin Poirier
You put Gaethje, the epitome of “never say die” attitude in MMA, in a cage against the best version of Dustin Poirier and what would you get? Exactly what they offered in Glendale, an enthralling back-and-forth war with a perfect finish to it, putting “The Diamond” in the upper echelon of lightweight division.

Nick: Chan Sung Jung Vs Yair Rodriguez
All you have to do is look at the result – Round 5, 4:59, spinning elbow KO. That in of itself was amazing. But to discount the previous 1201 seconds of action would be an injustice. Jung’s come forward style really would get to Yair, who every now and then would come back with a combination and flurries to prove he was still in the fight. With the decision most likely in hand for Jung, he continued the pressure in the fifth, looking to finish, but that eventually led to his downfall.

Brady: Chan Sung Jung Vs Yair Rodriguez
On the 25th anniversary of UFC, Zombie and Rodriguez put on a fight for the ages featuring perhaps the slickest knockout in UFC history, when Rodriguez caught Zombie with a back elbow as he was ducking a punch in the final second of the 5th round in a fight he was going to lose via decision.

GG: Tony Ferguson Vs Anthony Pettis
Tony Ferguson is a weird dude. His personality may actually hurt him from becoming the star that his skills begat. But it’s hard to not get behind him when he fights. He has an aggressive style that gives fighters problems and he can take and come back from punishment. I don’t know how long he’ll be able to fight the way he does, but his fight with Anthony Pettis on the semi-main of the UFC’s biggest show of the year put him right smack in the conversation in the money division in the UFC. Give Pettis’ corner credit too. Their man didn’t need to take any more punishment and it was rightfully stopped after the second round.

Duan: Israel Adesanya
Adesanya is still untested at the top level, but there’s no denying he’s had a star-making 2018, coming into UFC with 4 big wins in his first year with the promotion. He’s secured at least one major fight for next year with Anderson Silva and that’s one he’ll be highly favoured to win and push on towards a title challenge for late 2019.

Stefano: Israel Adesanya
It’s hard to find a better debut year in high level MMA than the 2018 of Israel Adesanya, who overcame his opponents with a constantly improving and flashy style. The sky seems to be the limit for the “The Last Stylebender”, eager to get his “star blessing” from his ideal predecessor Anderson Silva in his upcoming fight.

Nick: Israel Adesanya
To become a UFC star, it takes more than just winning bouts. Case in point; Demetrious Johnson who set records but never captured the fans’ attention. Adesanya has quickly come must see TV, going 4-0 this year with a flashy style. He can be neutralized if you don’t bite, as seen in the Vettori bout, but a good defense is pointless with great offense.

Brady: Israel Adesanya
It’s a rough year to find breakout stars, but Adesanya makes a valid case. He debuted in UFC last February and has won all four of his fights, three of which earned him POTN bonuses. His performance against Derek Brunson was spectacular and looks to earn himself a middleweight title shot in 2019.

GG: Aaron Pico
My pick is probably slightly tainted because I saw him live and up close at Bellator in San Jose and sat in awe at how he attacked Leandro Higo. He went 3-0 in 2018. Pico’s still just 22 years old and I have a feeling he’ll have the opportunity to fight for some gold in late 2019.

Duan: Kamaru Usman
I have been expecting a new champion to emerge from among the welterweight contenders for a while now and I think it could be Usman. He’s now won 9 straight in UFC and has some good names on his record. He’s probably one win away from a title shot next year.

Stefano: Roberto Soldic
The year didn’t start well for the “Robocop”, who lost some of his luster as top European MMA prospect with the defeat at the hands of Dricus Du Plessis at KSW 43. However, Soldic fully demonstrated that his previous remarkable resume in Europe wasn’t a fluke, getting his sweet violent revenge on the South African at KSW 45 and topping his 2018 with another of his trademark KOs against Vinicius Bohrer at KSW 46. A notable “fall and rise” year for the Bosnian, ready to make the big jump to top American promotions at the young age of 23.

Nick: Roosevelt Roberts
This Florida native came on the scene quickly with 3 wins this past year, starting with an appearance on the dreaded post-lims of Bellator. He was recruited after to appear on Dana White’s Tuesday Night Contender Series and impressed the boss with a 2nd round submission, getting him a roster spot in the UFC. His debut came with a standing guillotine with with 10 seconds to go in the first round over 8 year vet Darrell Horcher, who’s only other finish loss in UFC was a 2nd round to current LW champion Khabib Nurmagomedov.

Brady: Aaron Pico
I feel like this is equivalent to picking chalk, but Pico does have the tools to be an eventual megastar and looks to take that next step forward in 2019.

GG: Kayla Harrison
Kayla’s first fight was just this summer for PFL. She ended the year strongly by beasting over Moriel Charneski. Fighting for the PFL gives her the opportunity to fine tune her craft slowly. There are definitely questions about competition at her weight class. And her standup is juvenile so far. But she’s so dominant with her judo skills and they give her a tremendous base.

When you think about what Ronda Rousey’s success opened up in MMA, you see Olympic gold medal winners like Kayla and you have to just tip your cap to Ronda.