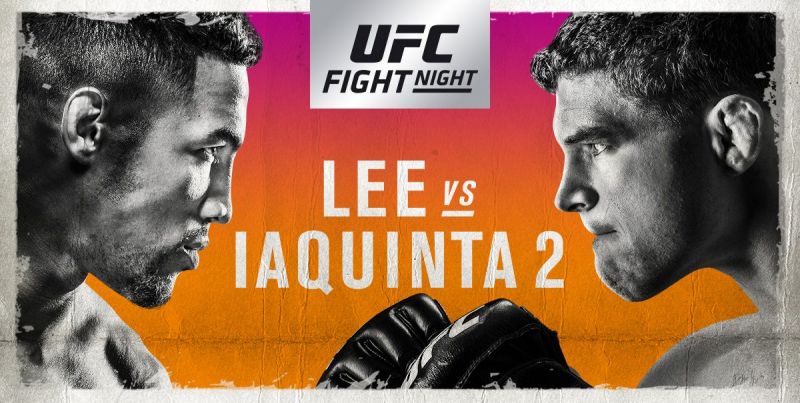 Check out our UFC on Fox 31 live coverage featuring Lee vs Iaquinta 2 in the main event.

It’s the last UFC on Fox show before they move over to ESPN starting in January. And while the card in of itself doesn’t have any matches that are sure to draw a big audience, the top four matches should be great.

This ended quickly. Miller went for a leg kick and Oliveira grabbed him, picked him up, and slammed him. He got his back, sunk in the hooks, and Miller had to tap out. Miller fought it, but couldn’t fight it for long.

Winner: Charles Oliveira by way of 1st round submission

Pettis landed a jab on Font’s right eye and he’s already messing with the eye. Font is coming forward though with both hands and he’s beating Pettis to the punch. Font got him down and was giving him the business. He got side control but ate an upkick. Good round for Font.

Font was popping that jab and Pettis’ head was bouncing like a speed bag. Font’s strikes are varied and his combinations have Pettis confused. Pettis landed a nice head kick and he’s competitive, but Font looks great and is winning.

Pettis’ face is looking pretty badly. He also got his mouthpiece knocked out. Font got another takedown and he’s riding him out to finish the fight. Pettis tried to throw more upkicks from his back, but couldn’t get to his feet in time to throw the Hail Mary. Font should win a clear decision.

This was a great first round. Hooker and Barboza both used leg kicks as their main strike to set up everything else. Barboza’s leg kicks did more damage and by the end of the round, Hooker’s back leg looked to be damaged. They both touched each other up though. Barboza missed a big overhand right and Hooker was happy with his defense and then walked into a short right. Hooker backed Barboza up but then Barboza came back. Barboza’s round.

Barboza was kicking Hooker’s leg from out under him. Hooker had to start fighting on the inside and started doing damage. Barboza got really tired and for whatever reason, went to the ground. Hooker had this look on his face like he couldn’t believe it. Back on their feet, Barboza started hitting him with everything he had and Hooker kept coming. Both guys are exhausted. Barboza pushed him off and Hooker just fell. Barboza was too tired to follow him. Hooker is out on his feet. I hope his corner does something. Amazing fight.

Hooker took so much punishment. It was body kick after body kick and the referee wouldn’t stop it. The doctor had an opportunity to stop it after the second and he didn’t. He finally went down to a knee and it was stopped. Jesus.

Winner: Edson Barboza by way of 3rd round TKO

This was a safe round, but a solid round. Iaquinta was doing stuff that looked to frustrate Lee, such as feinting and then catching him with a single shot when he didn’t expect it. Lee was switching stances, trying to confuse Iaquinta. I’d give that round ever so slightly to Iaquinta.

Lee got the second round. He got a takedown and he worked toward the choke. But Iaquinta came back late in the round and was landing his right hand. He dropped his hands a bit as if almost to goad Lee into throwing with him.

Iaquinta started out strong again, but Lee got the takedown and wore him out for most of the round. It seems that the fight has steered itself toward Lee.

Iaquinta took the round and I have it tied after four rounds so far. It wasn’t the best round of the fight as there were lots of missed punches, but Iaquinta cut off the cage and had great control for all of it.

Iaquinta may have eked this one out. The round was a stalemate halfway through, but Iaquinta started throwing the right hand and landing it. Lee came back with some combinations of his own, but Iaquinta continued to walk him down. He landed at least three great right hands that Lee felt. I have him winning the fight 3-2.

Adriano Moraes is ready for more after Demetrious Johnson victory