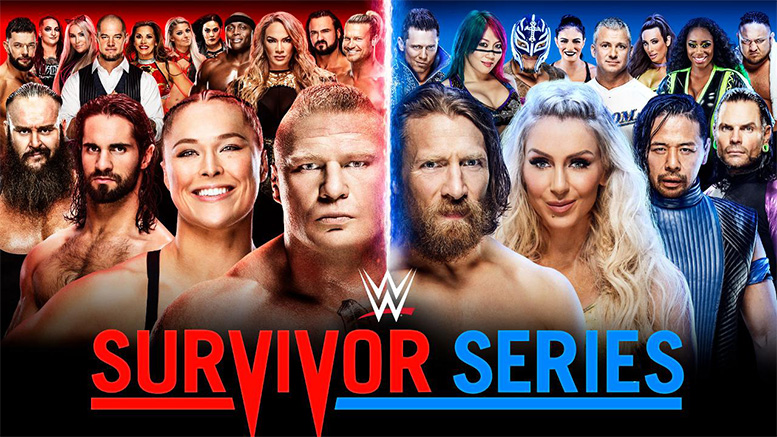 In the pre-show match, the Usos were the sole survivors in their match and won the tag team elimination match.

The women’s elimination match will open up the show.

The first two eliminations were quick. Tamina hit Naomi with a super kick to pin her and then Carmella immediately rolled her up to make it even Steven immediately.

Mickie James was pinned by Mandi Rose after Sonya Deville hit a running knee. Rose stole the pin. Bayley beat Carmella with a Bayley to Belly. Sasha Banks beat Rose with the Banks Statement. Bayley and Deville were going at it on the outside. Bayley hit another Bayley to Belly on the outside and they both got counted out.

It was down to Nia and Sasha against Asuka. Nia turned on Sasha and Asuka choked her out. Jax immediately came into the ring and hit some leg drops on Asuka and then hit her senton bomb to win. She was the only one to really get any reaction out of the crowd.

Match was a little slow to start, but picked up decently. Rollins won with the Curb Stomp after he kicked out of the Kinshasa to the back of the head.

They did start out slow and it was about a 1/2 speed match for a bit until the last five minutes, but once they got going, it got really good. I didn’t expect the finish because I thought Dean Ambrose would come in, but he didn’t.

I was digging the hard hitting match. It wasn’t a classic by any means, but four guys were hitting each other hard. Drake Maverick interfered and Sheamus chased him out of the ring. He ran right into the Big Show and took a bump. Then Show picked him up and choked him with his arms out extended. Then Maverick started to piss himself, which distracted Sheamus and Cesaro. AOP hit their double team powerbomb/neckbreaker move on Sheamus to win.

Enzo Amore was in the second row trying to get people to pay attention to him and saw security and booked it out of there.

This was really good and they gave it a good amount of time. The spot of the match was a Spanish Fly from the announcer’s table to the floor.

One would think double countout, but no, Murphy hit a version of Will Ospreay’s Cheeky Nandos kick. Ali came off the top rope and Murphy hit him with a knee and then the Murphy’s Law for the win.

Poor Samoa Joe was immediately eliminated. He jumped McIntyre and sunk in a choke, but then ate a kick and got pinned.

Braun and McIntyre were arguing and Bruan hit him with a right hand. Then chaos ensued. The Smackdown guys quintuple teamed Braun and Shane hit the big elbow from the top rope to the announcer’s table on him.

Finn Balor and Rey Mysterio had an awesome sequence which made me want to see them have a singles match. Rey pinned him after the 619 and springboard froggie splash.

It’s down to Strowman, McIntyre, and Lashley against Miz and Shane. Miz tried to get Shane to take on Strowman, but Strowman shoulder tackled Shane down. Then he pinned Miz with a powerslam. Strowman pinned Shane with a powerslam to win. It was the Braun show.

Corbin attacked Strowman after the match and then got out of dodge.

This wasn’t necessarily the best worked match, but this was so interesting. It was super rough in spots, which made them improvise a bit, but it was rough in a way that made it look like competition rather than a dance. Charlotte dropped Ronda face first on the bottom turnbuckle which looked rough. Then, there was a moment where Charlotte threw a back elbow and Ronda started bleeding from the mouth.

She continued to beat her up with a crazed look on her face. And then she used the chair and put it around Ronda’s neck and stomped on it. Ronda was bleeding from the mouth and from her ear and had all kinds of welts on her body.

Bryan played a little cat and mouse, smiling. That is, until Brock clotheslined him and then suplexed him right on top of his head. And then he suplexed him like 1,000 times.

He hit the drop kicks into the corner. Brock caught him on the third one and then went for a F5 again. His leg buckled and then Bryan put him into the Yes lock. Bryan finally succumbed to the F5.