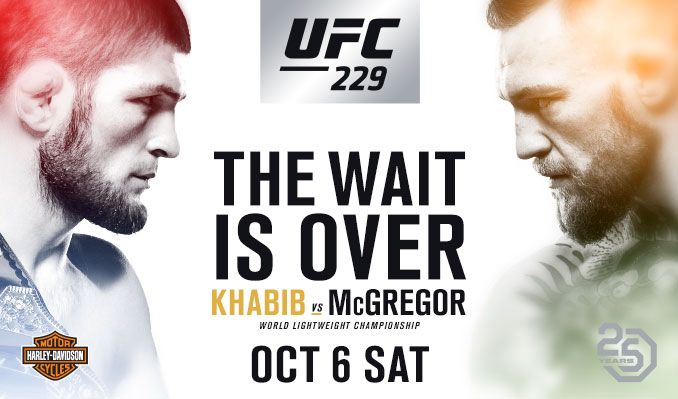 It’s Conor vs Khabib and we’ve all been waiting for it. We’ll have live play by play of UFC 229. Follow along with us.

John LaRocca and I did a short preview of the fight on the latest episode of the Fight Game Podcast.

But I have slightly changed my opinion. I originally picked Khabib because there were too many questions I had about Conor’s lifestyle and wondered if the partying was taking away all his athletic gifts. But then, all week, I’ve watched him embrace the gravity of the event while Khabib has seemed to turn away from it. I think that matters. Conor learned how to main event a big show. But after watching the master Floyd Mayweather make him the B-side in their boxing match last year, Conor now knows how to main event a huge spectacle. This isn’t just about the actual fight anymore. It’s about the before and the after as well. It’s about not being overtaken by the moment. I think it may be too big for Khabib. I’m predicting that Conor knocks him out in the second round.

Duan is sticking to his guns with his Nurmagomedov pick. He’s been following Conor longer than most.

Here’s his prediction:
This feels like more of an old-school striker vs grappler match-up than anything we’ve seen at the title level in UFC in a really long time. I don’t see either of these guys surviving in the other’s comfort zone for very long. Khabib can’t eat shots from McGregor the way he has with other opponents. If it’s fought on the feet, he will be put down fast. If he gets Conor to the mat though, which is what I think will happen, he will work him over, tire him out and probably TKO him in a very one sided beating.

Truth is, I thought this would be a really tough fight for McGregor two years ago. After his time away from the sport, his dalliance with boxing and all the question marks around his behavior outside the cage, I can’t shake the feeling that the Conor McGregor story may be over – at least as far as him being one of the best fighters in the world goes. Right now he’s the only person who really knows if he’s been dedicating himself, but it will become apparent on fight night.

Duan is absolutely right in that we’ll get the answer to that question tonight.

We’ll be back for our live UFC 229 coverage.

Herrig pushed her back up against the cage again, using her strength to her advantage. This is where Waterson’s size works against her. Waterson got out of the clinch and landed a right hand. Herrig was either pretending she was loose or maybe it affected her. Waterson landed a kick and then got a takedown. This was Waterson’s round.

This is a weird fight. The entire conversation by the announcers was how Derrick Lewis only has one round because of his back. Volkov started hot and had Lewis on the defense immediately, but he wouldn’t follow up. He punched Lewis in the eye and Lewis reacted as if it was a poke. The fight stopped and it looked like Volkov was complaining that Lewis was reaching into his mouth. He looked like he could’ve finished him. I’m not sure why he stopped it. Lewis got a big right hand that rocked him, but Volkov was fine. They went to the ground and Lewis ended up on top raining down shots. Volkov won the round, but he let up somewhat.

Lewis isn’t taking shots well. He makes it look like every single shot is destroying him and he falls back into the cage. I think he’s somewhat lulling him to sleep at the same time, which is making Volkov apprehensive. He’s clearly winning the fight, but at the same time, is very respectful of Lewis’ power, which is making for a weird fight. It seems like if he just continues to pressure him, he can stop him.

Lewis’ corner basically told him he needs to fight better. And thanks to Volkov seemingly having no clue how to close a fight he’s clearly winning, he landed a huge right hand to knock him out and win the comeback fight of the year. Lewis looked to have zero chance to win, but Volkov got super sloppy and got caught. Wow.

Winner: Derrick Lewis by way of 3rd round TKO

Reyes looked good early with his feet. He was beating Saint Preux to the punch, almost surprising Saint Preux at how quick he was. Saint Preux pushed him against the cage going for a takedown and did get it, but Reyes was up immediately and firing back. He was had Saint Preux wobbled, but was cautious with about a minute out. Maybe he watched the Derrick Lewis fight.

Reyes slowed down a lot in this round which was to Saint Preux’s benefit. Saint Preux landed a couple of decent shots, but not enough. He went for a takedown and Reyes stuffed it and may have landed an elbow at the same time which opened up Saint Preux. He’s got quite the mess going on.

Saint Preux looked okay in the round, but Reyes was still more active and landing. But he was clearly tired. Right at the end of the round, Reyes landed a counter right and Saint Preux went down. The buzzer sounded soon thereafter and it went to the cards, even though it could’ve clearly been a knockout. Saint Preux was out.

The fear for Ferguson is that he came back from his severe knee injury too soon. But he was super aggressive and beating Pettis to every strike. He was so aggressive that he was almost over-extending himself. Pettis was just trying to keep him at a distance and off him. Ferguson used the cage to throw a shot, kind of trying to show up the Pettis kick in a sense.

This is one of the best rounds in the history of MMA. Pettis caught Ferguson and put him down. He followed up and Ferguson kept rolling out of trouble, while still looking shot. Somewhere in the transition, Ferguson nailed him with an elbow. Pettis had a cut just above his forehead and it was a crimson mask. It looked like Ferguson was bleeding, but it was Pettis. They stopped the fight to check Pettis’ head. That was the worst thing for him because the momentum switched to Ferguson and he was smiling after getting nailed just seconds earlier. He got the best of Pettis for most of the rest of the round, nailing him with elbows and punches. Pettis looked like he’d been through hell. He’d catch Ferguson with a counter shot and give him some hope. But he couldn’t keep Ferguson off him as the round ended.

Pettis’ hand was broken so his corner stopped it.

Winner: Tony Ferguson by way of 2nd round TKO

Conor came in with his hands down as if to dare Khabib to strike with him. He landed a nice left hand and then threw a kick. Khabib shot in super low and met Conor’s knee, but it didn’t affect him. Conor fought the takedown for a good while until Khabib pushed him back against the cage in a sitting position. It took him about two minutes, but he got Conor on his back and transitioned into half guard. Easy round for Khabib, but Conor didn’t take any damage.

Conor was continuing to dare Khabib to stand with him by having his hands down. And he paid for it. Khabib blasted him with an overhand right that nearly put Conor out. He rushed at Conor and missed and Conor nearly landed a knee. Khabib looked like he was going to try for the knockout, but smartly went in for the takedown and picked Conor up and put him down. Now he’s landing huge shots from the top. Conor was just covering up while being blasted. Khabib got a little tired and went back to the ground and went for a kimura. Conor got back into a sitting position and Khabib went for a guillotine. Conor got up, but they’re both spent. That’s 10-8 for Khabib.

This started out well for McGregor. He withstood two takedowns early and started to scientifically chip away at Khabib. He didn’t land anything that rocked Khabib, but he did land some really solid punches. Khabib got a takedown, but Conor was right back up. Khabib took the round off a bit and at the end of the round was yelling at Conor. It’s 29-27 for Khabib so far.

Khabib has great power, but he doesn’t know how to set up shots. But he does have his takedown and he got McGregor down again. He was hating life and Khabib got a mount then got his back. It looked more like a neck crank and then Conor just tapped.

Winner: Khabib Nurmagomedov by way of 4th round submission

After the fight, Khabib jumped the cage and went after Conor’s jiu-jitsu coach in the crowd. Then, two of Khabib’s guys attacked Conor in the cage.