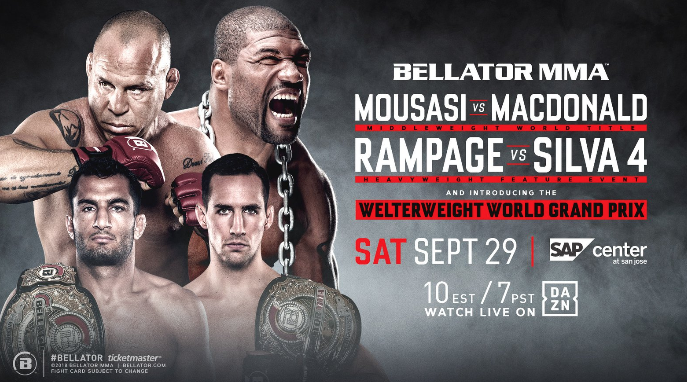 We have live coverage of Bellator 206 featuring Mousasi vs MacDonald as the main event.

Aaron Pico also takes a big step up in competition against Leandro Higo. Douglas Lima and Andrey Koreshkov face-off in the first fight of the welterweight grand prix, where the winner will now receive a million dollars from 50 Cent. Keri Melendez faces Dakota Zimmerman as well.

We’ll be back with live coverage of the main card.

He's keeping an eye on the Bellator Welterweight World Grand Prix on @DAZN_USA!

Bolanos is the much quicker fighter. He was the aggressor the entire round and had Gutierrez down three times in the round. You can hear how hard he’s throwing his kicks. Gutierrez didn’t put up much offense in the round.

Bolanos turned southpaw and landed a big left hand which put Gutierrez down. He followed him to the ground and pounded him out as Gutierrez turtled up. Ref stopped it.

Winner: Gaston Bolanos by way of 2nd round TKO

Keri landed a front kick right in Dakota’s face. Dakota clinched and they went to the ground. Keri picked her up with Dakota’s legs wrapped around her and powerbombed her like she was Big Van Vader. Zimmerman is just holding on for dear life, trying not to give Melendez any space to strike. Zimmerman snuck in a triangle which she turned into an armbar. Melendez’s arm bent the wrong way. She hung in there. What a comeback in the round for Zimmerman after nearly getting her teeth kicked out.

Zimmerman wants to crowd Melendez so Melendez can’t strike and it’s working to her advantage as she seems to be stronger. Melendez can’t get untied. Zimmerman tried to drop into the guard by wrapping her legs around Melendez, but Melendez just walked her to the other side of the cage. Crowd is very pro-Melendez and whenever she does anything, it’s like a pro wrestling crowd counting punches from the top turnbuckle. Melendez was strong with knees against the cage. Otherwise a nothing round.

Melendez had some space and landed some right hands. Zimmerman’s boxing isn’t very good, but she’s not really trying. She just wants to get close to tie up Melendez against the cage and that’s what she did. She then dragged Melendez to the ground and into her half guard. Zimmerman would be winning the fight if the fight was about how long you can keep someone tied up against the cage or how long you could keep your legs wrapped around the other.

This was scary. Pico’s boxing was excellent. Early on, he was just missing at the end of his punches. But then he started connecting, digging to the body viciously. He caught Higo with an overhand right after he showed a fake left. Higo was tough. He got back up and kept taking punishment. The fight should’ve been stopped at least two or three times before it was. Pico hit him with a shot and the cage may have been holding him up. Higo tried to slide away and his legs buckled and he went down again. Pico was throwing punches with bad intentions and it was finally stopped.

Winner: Aaron Pico by way of 1st round TKO

This is the first match of the welterweight grand prix tournament. This is a five round fight.

Lima was letting the right leg go early on, throwing kicks to the body and the legs. Koreshkov tried a spinning back kick and then shot low for a takedown that Lima stuffed. Koreshkov kept him up against the cage for most of the round, trying hard for the takedown.

Lima continues to the throw the leg kicks and he’s knotted up Koreshkov’s left shin/calf something fierce. Not many chances for Lima to open up as Koreshkov kept looking for the takedown and pushing him against the cage. I think Lima did enough with kicks and strikes with his back against the cage.

Fans are upset with Koreshkov’s strategy to keep shooting and pushing Lima’s back against the cage. Koreshkov shot in and Lima blocked it. Lima turned him over and when he was getting up, hit him with a knee.

There was very little action until the last ten seconds of the round. Koreshkov ducked into a right hand and stumbled. He was dazed and walked himself back against the cage only to take a couple of shots right before the round ended.

Koreshkov is continuing to circle back while keeping his jab out there, but not throwing it intending to land with it. Lima is trying to walk him down and land punches, but he’s not doing so recklessly. Koreshkov shot in for the takedown and Lima turned him over and started landing punches. He took his back and sunk in a rear naked choke. Koreshkov didn’t tap but he looked like he went out and it was stopped.

Winner: Douglas Lima by way of 5th round submission

Silva’s body looks awful, but he looks like he’s in better shape than Rampage. He’s moving much better. Rampage is still much bigger and stronger. When he lands, Wanderlei gets moved around the cage. Wanderlei landed a kick that grazed Rampage’s head that knocked him off balanced. He threw another kick to the head that missed. Wanderlei’s moving too good for Rampage who wants him right in the center like a heavy bag.

Crowd is behind Rampage, but Wanderlei is winning some of the crowd by winging crazy punches like old times. They don’t have the same speed to them, but he’s holding his own. Rampage landed a right hand to the side of his head that created a thud sound. I’m surprised Wanderlei didn’t go down. Rampage had him up against the cage and landed short uppercuts. Wanderlei resets close the cage so Rampage comes forward and so he can flurry. Rampage set up a big right hand that dropped him and Wanderlei went down, sitting upright, in perfect position for Rampage to follow up. It was stopped.

Winner: Rampage Jackson by way of 2nd round TKO

Mousasi is just sticking that jab right in MacDonald’s face. Rory can’t get his rhythm down and just before he thinks about throwing, he’s getting stuck in the face. Rory landed a nice right hand that Mousasi shook off. Rory started defending the jab better and moved his head much better, avoiding the right hand. But this was Mousasi’s round.

Rory went for a takedown, but got cute and Mousasi ended up on top and threw some big shots on the ground. Rory is bleeding from the nose it looks like. Mousasi is so strong on top of him. Rory tried to body lock him high, but Mousasi continued to punch and elbow him. Rory started bleeding badly. He couldn’t get him off and the referee had to stop it.

Winner: Gegard Mousasi by way of 2nd round TKO