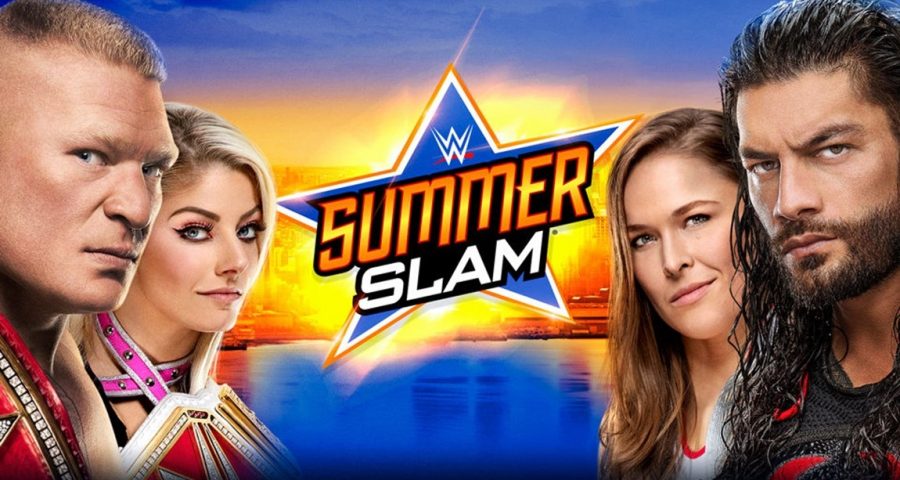 After last night’s NXT TakeOver: Brooklyn IV, WWE has its work cut out for them. I haven’t been a big fan of the product all year, but like WrestleMania, this show has a little bit of everything. The problem is, the bad is often boring and boring is worse than bad. I do have high hopes for several matches on this card, and the Ronda Rousey intrigue is still there for me.

Here’s the full card via Wikipedia: 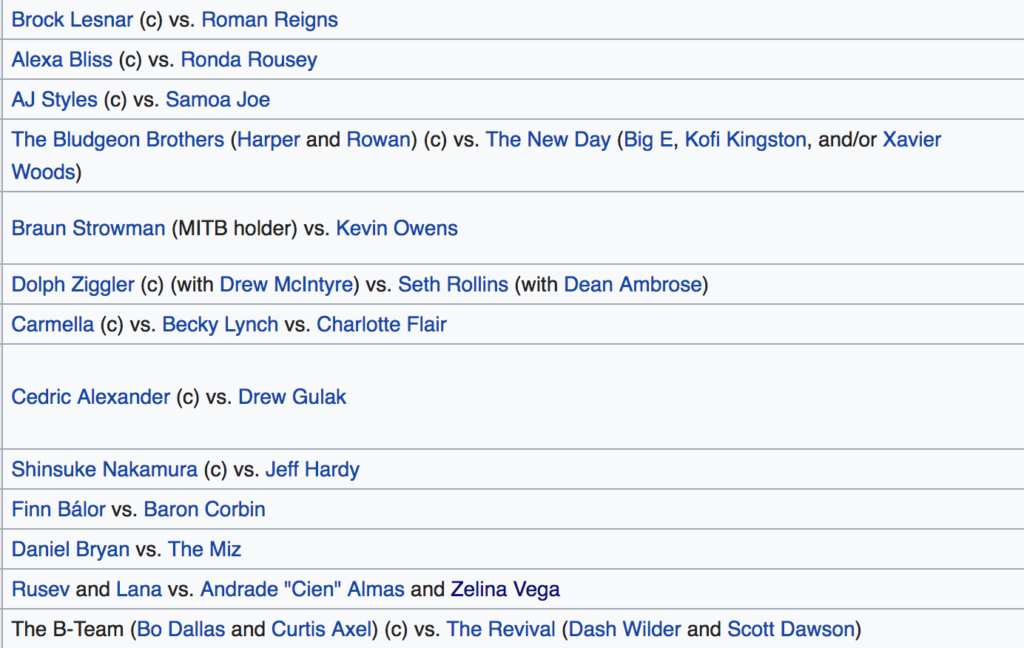 We’ll be back after the preshow with live coverage of the event.

Here’s what happened in the pre-show matches:

Let’s get going with our SummerSlam live coverage.

Seth Rollins with Mean Dean Ambrose against Dolph Ziggler with Drew McIntyre kick off the show.

Early on, I thought the match was flat, but they really got the crowd into it by the end. Seth worked really hard and Dolph kept up with him well.

There was a ton of stuff going on and the match may have peaked more than once. But the crowd was still able to stay with it.

The biggest spot was both of them on top and Rollins hitting what they called an inverted superplex off the top rope. But, it looked like he took the brunt of the blow, which was weird. Then he rolled into a side slam that got a two count.

.@WWERollins is simply on another level! WOW!

Seth had gone for his curb stomp finisher prior, and right before he did it, McIntyre tossed Ambrose into the steps and Dolph was able to get out of the way and hit the Zig Zag for a two count.

This time, Drew tried to interfere again and Ambrose caught him, took him off the apron, and gave him a DDT to the floor. Dolph tried to set up a superkick, but got superkicked himself and then Seth hit the curb stomp.

Seth is your new Intercontinental champ.

The Bellas were backstage saying they were there to have some fun and watch Ronda Rousey make history. There’s a rumor that Nikki is facing Ronda at Evolution.

This was okay and pretty good up until the finish. Xavier Woods did a Randy Savage elbow drop to the outside and floor. He almost didn’t make it.

At the end, Big D had Luke Harper up and across his shoulder and Xavier was about to jump off the top rope to hit their Midnight Hour. But Erick Rowan had the mallet hammer and hit Xavier with it for the DQ. He then hit Big E with it. Harper took it from Rowan and then hit Big E with it again.

Owens wins the Money In The Bank briefcase if he wins the match in any way.

This was kind of a waste. Strowman destroyed him outside the ring. And then hit his powerslam finisher and it was over.

This match was really bad. The story was that Becky can’t win the big one and she was in urgency mode all night, trying to use the Disarmer.

Since it was a triple threat, you had the camera catching all three women just waiting around to do spots. Charlotte missed a kick that Becky sold by 3 feet. Carmella’s screaming was as annoying as ever, but at least she wasn’t in the ring that much.

Near the end, Becky had the Disarmer on and Charlotte hit the Natural Selection on her to win the match and the belt.

After the match, they hugged and the Becky turned on her. The crowd chanted for Becky after the turn.

It was a match used to set up a fight. The match was pretty good at times. It was a little slow at others. This was the first match in what looks like a long feud.

Before it started, Joe took the microphone and called out AJ’s wife who was in the crowd with their young daughter. AJ took the mic and said they were there to see him kick Samoa Joe’s ass. And then, he grabbed a headlock.

Near the end of the match, AJ hit the Styles Clash, but Joe looked a bit heavy and he hooked one arm but didn’t bother with the other one. Joe kicked out. Styles went for the Calf Crusher and Joe grabbed his head and slammed it to the mat to get out of it.

They were outside the ring and Joe grabbed the mic again and said to AJ’s wife and kid that daddy’s not coming home, but he’d be the new daddy. Then Styles went ape shit. He destroyed Joe with a chair and was bleeding on his own. He was DQ’d and then went to his wife and hugged his daughter. His daughter asked him why he was bleeding. Noelle Foley may have gotten flashbacks.

Elias was in the ring ready to do a song and his guitar broke. Wasted segment, but at least it was short.

The Miz Vs Daniel Bryan

The match was built around the kicks that Bryan does and Miz copies. At one point, Bryan was on his knees and Miz was kicking him to the chest. But Bryan was puffing his chest out as if they weren’t effective.

Miz went for a figure four, which Bryan turned into an armbar attempt, which Miz looked to try and turn into a Boston Crab, but just slingshot Bryan into the buckles and ring post. Miz then hit the Skull Crushing Finale for a two count.

They were on the apron outside the ring and Bryan went for more kicks. Miz moved out of the way and Bryan kicked the post. Miz threw him back in the ring and put him in the figure four. Bryan turned it over and Miz had to get the ropes.

Bryan did his running knee off the apron and to the floor which sent Miz toward the barricade. His wife Maryse was ringside and put something in his left hand. Bryan set up his dive through the ropes and Miz hit him with his left hand and knocked him out and pinned him.

Finn brought back the Demon character for this match, of all the matches.

This was another squash. Corbin acted like it was unfair that Balor had face paint on. Finn hit all his big moves and beat him fairly quickly.

The crowd was really dead for this match. Hardy was ready for all of Nakamura’s dirty tricks, but it was his own bad decision that was his undoing.

He had Nakamura down and went for the Swanton. Nakamura rolled out to the side of the apron. So Jeff decides to try and hit the move there. Nakamura moved.

One Kinshasa later and Nakamura won.

Randy Orton came out like he was going to beat up Jeff some more, but then just walked back. That was weird.

Alexa teased leaving the ring and Ronda said she was going to give her a lesson in how to be a champion. She’s going to give her the ring. She then turned her back and sat down. She basically gave her her neck too. Bliss tried to choke her and Ronda just broke it and put her on her shoulders and threw her.

She then started talking shit to her. She put her on her shoulders again and tossed her. Then she hyperextended her elbow. Bliss must be double jointed. And then Ronda put her in the armbar and she submitted.

Braun Strowman came out and said he was going to challenge the winner.

Reigns went crazy with Superman punches and spears and then tried to end it, but Lesnar caught him in a guillotine. Reigns powered out. But Lesnar went for three Germans.

Reigns went to spear Lesnar, but Brock moved and he went through the ropes and took out Braun. Then Lesnar gave Braun a F5 out on the floor. Brock then tossed the briefcase to the top of the stage and hit Braun with chair shots.

Brock got back in the ring and ate a spear and Reigns won.

I guess this is it. Strowman was killed dead by Lesnar. And the show goes off the air.