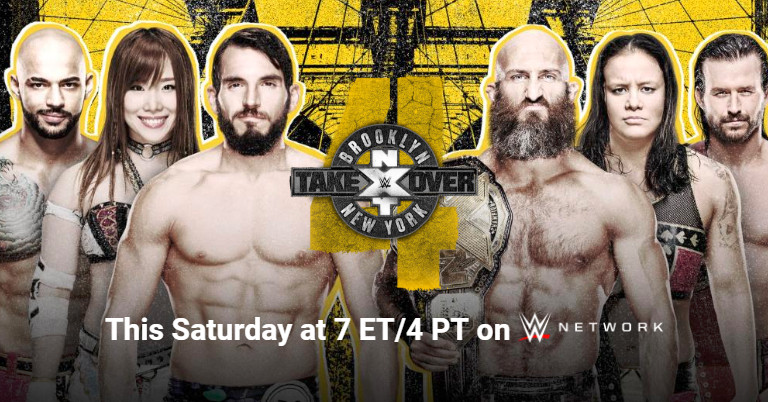 Follow along as we bring you live coverage of NXT TakeOver: Brooklyn IV.


I’ll be honest here. The one show that I wish I watched weekly is NXT. It’s a show that I can never seem to prioritize enough to fit into my schedule. But, come TakeOver time, you know I’m there. I haven’t missed one yet.

Even though I’m away from my home on business, thanks to the WWE Network, I’ll still be able to cover the show. Just call my name, I’ll be there. Word to little Michael Jackson. Don’t fail me WWE Network!

Here’s the lineup from WWE.com:

The spot that people will talk about is Tyler Bate doing the giant swing on Roddy with O’Reilly on his back. It was a giant swing/airplane spin combo.

They set up the hot tag a couple different times. They tried a third time and the crowd didn’t pop for it.

Roddy had Seven a Boston Crab and Bate picked up O’Reilly like he was either going to powerbomb him or chokeslam him and rammed him into Roddy. Bate did an amazing dive over the top rope and then his his Tyler driver on Roddy for a two count.

O’Reilly had Bate in the figure four as he and Roddy worked on his knee. Seven went to get the towel to throw it in, but instead threw it into the crowd.

Seven had O’Reilly on the his shoulders and Bate hit a knee drop on him, but it was only a two count. They then hit the high low on Seven for the pin.

After the match, the War Raiders (formerly War Machine) attacked the Undisputed Era.

Dream has “Call me up Vince” on the back of his tights.

The story of the match was that Dream had to break down the muscular EC3. He gave him a DDT to the floor. Then did a Ravishing Rick Rude neckbreaker.

EC3’s offense was pretty indy-riffic. The crowd was trying to get excited, but you can tell that they blew up after the first match.

Dream went for the Dream Valley Driver, but EC3 kicked out. At the finish, he hit another one, but this time on the side of the apron. Then hit his elbow drop from the top rope to where EC3 was, still on the apron. He got the pin.

They showed Matt Riddle in the crowd.

The match started slowly with Cole grabbing a headlock and talking trash. But it quickly picked up. It was a superkick vs enziguri battle for awhile. Ricochet went for a springboard moonsault after running toward the ropes and while he was in mid-air and upside down, Cole hit him with a superkick to the neck and then his knee to the neck finisher for a two count.

Cole was near the corner and on the outside of the ring. Ricochet ran toward the corner and jumped up and rana’d him outside the ring. He came back in and hit his 630 for the win. This was good.

Ronda Rousey, Jessamyn Duke, and Marina Shafir are in the crowd. Ronda yelled out that Sane wasn’t a real pirate.

Sane started hot, but Shayna turned it into her match with the bully style. She was working on the ankle and even tried to break her toes.

When Sane made her comeback, she powered up and they did a very dialed down version of the slapping spot that Hiroshi Tanahashi and Kota Ibushi did in their match last week.

Sane then hit her elbow drop off the top to Shanya’s back. She went up top again, but Shayna rolled out. Kairi hit a high cross off the top to the floor. And then rolled Shayna back in and hit the elbow again for a two count.

Shayna got a rear naked choke before Sane got the ropes. Shayna got a heel hook, but Sane transitioned it into a submission of her own. Sane hit her with an Alabama Slam and then went back to the top. Shayna got her feet up to block it and went for the rear naked choke. Sane fell back and bridged herself while holding down Shayna’s shoulders for a surprise win. That was the best WWE women’s match in quite some time.

Sane is the new women’s champ.

This is a fight. Ciampa tried to submit Gargano out cold. The announcers hit on the point that in a Last Man Standing match, there is no rope break.

Gargano started the pillaging and plunder. Ciampa gave him a DVD on the announcer’s table. Gargano set up two tables outside. They weren’t stacked on top of each other. Instead, Gargano flipped one upside down on top of the other, exposing the legs.

Ciampa used two powerbombs and then his Project Ciampa. He sat in the chair, waiting for Gargano to get counted out, but Gargano got up and superkicked him.

Gargano was on the outside and did his running cannonball spot to the floor, which he hit earlier, but crashed and burned the second time. Ciampa gave him a Pedigree on the steps. Gargano got up right before 10.

Ciampa tore apart the apron like in their last match. He tried to DDT Gargano onto the boards, but instead it was Ciampa who was DDTd. Outside, Gargano went to superkick Ciampa, who was on his knees. Ciampa moved and Gargano kicked a WWE guy who was ringside. Then he slammed Gargano’s head on the monitor and then used a chair to knee Gargano through the barricade. Then he dumped the guy who got superkicked and everything he could find on Gargano to bury him. Gargano got up.

Chairs, a suitcase and even a HUMAN aren't enough to keep down @JohnnyGargano as #JohnnyWrestling gets up at the count of 9️⃣! #NXTTakeOver #LastManStanding @ProjectCiampa pic.twitter.com/jn9EO4aAVK

Ciampa brought out the handcuffs. Gargano superkicked him through the perched tables and Ciampa got up at 9. They went back up the ramp. Gargano handcuffed Ciampa to something near the stage. Ciampa can’t stand up because of where he’s handcuffed. Gargano keeps superkicking him while Ciampa tries to apologize. Since Ciampa can’t really stand, he has to get to his feet to stop the count. Gargano ran at Ciampa to do a running knee. Ciampa is out. But Gargano also crashed and burned and hurt his knee. As the count was at 9, it looked like both guys would be counted out. But Ciampa fell off the stage to the floor beneath and technically landed on his feet to beat the 10 count. He’s still the champ.