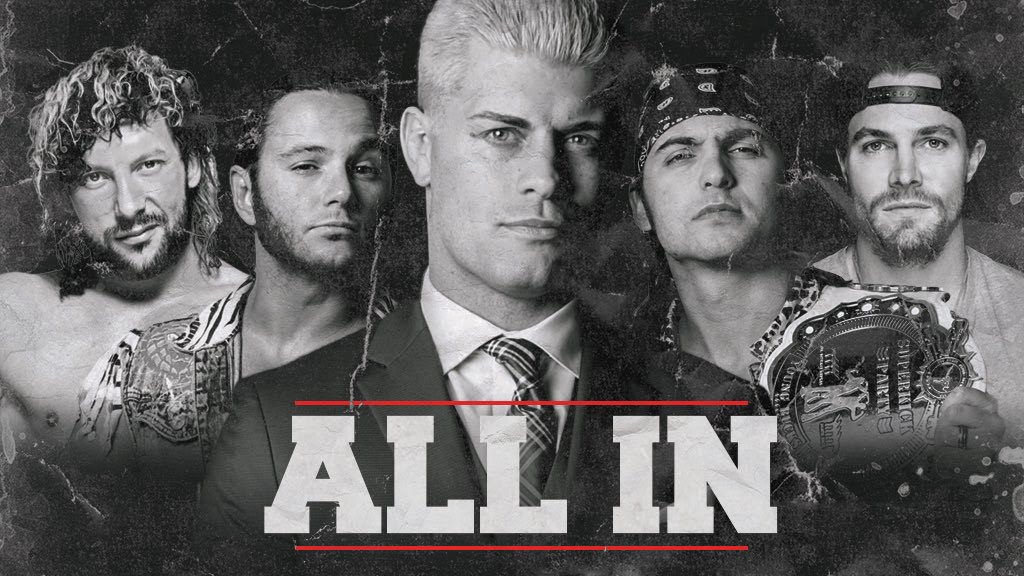 We’ve got All In live coverage for those not able to check it out live.


This is quite the historical show, considering the last time a non-WWE show sold this many tickets in the US, WCW was still in existence. The show itself should be a ton of fun. It’s one of the best “indy” shows of all-time.

We’ll have live coverage of the show starting with the Zero Hour preview show on WGN.

Cody and the Bucks came out. There was some issues with the mics being too hot and they turned them down quite a bit. Matt and Nick teased blowing the pyro budget in the first 90 seconds, but it took them two turns to get it right.

Then they introduced Road Warrior Animal to the crowd who came out on a motorcycle. Then they had folks from Pro Wrestling Tees throw merch into the audience. Well, not necessarily the beginning I thought I’d see.

SoCal Uncensored Vs The Briscoes

Frankie Kazarian and Scorpio Sky come out dressed like Rocky from Rocky II and Apollo from the first Rocky.

Sky did a ridiculous dive over the top rope which was like a dive from a jump stop like if he was a basketball player.

Match was hot. Just what it needed to be for this type of show. All big moves and non-stop action.

Kenny Omega did an interview about his match with Pentagon. There was some echo and it sounds like they were in a bathroom or something. He joked about the interviewer wearing flip flops and she said it was to make him look taller. Nice shot at Stephanie McMahon. She then asked Kenny why he was on his tip toes. He said it was to get a calf pump. Pretty funny.

Lots of Pro Wrestling Tees commercials featuring the talent. Not sure if that means that they couldn’t sell ads or if this is an audition of sorts for the Bullet Club/Elite plus friends.

Let’s see if I can list most of the guys in this match. So far, I see Billy Gunn, Bully Ray, Ethan Page, Brian Cage, Chucky Taylor, Tommy Dreamer, Punishment Martinez, Rocky Romero, Trent Baretta, The Hurricane, Billy Gunn’s son and others.

Marko Stunt is in the match and he can’t be more than 5 feet tall.

The Best Friends did a hug and the camera cut away as if it was an Okada Rainmaker pose. Punishment Martinez then tossed both of them out.

Martinez and Cage had a nice tête-à-tête based around chokeslams, only for the Hurricane to chokeslam them both.

In a weird back and forth, Jimmy Jacobs dressed in corset, went after Billy Gunn’s son Austin. They traded suck-its. Then Billy saved his son and Jacobs kissed him. Gunn told him suck this b-word and then tossed him.

The final four was Jordynne Grace, Brian Cage, Bully Ray, and Colt Cabana. Grace tossed Cage. Then she and Cabana did the “What’s Up” headbutt to Bully’s balls. She tried to toss out Bully, but Bully reversed her and tossed her. It’s down to Bully and Colt. Bully tossed Colt.

Wait, El Hijo Del Chico, who was powerbomed outside the ring earlier and never made it in tossed out Bully to win the match. He unmasked as Flip Gordon. Gordon will face Jay Lethal later in the match.

It’s time for All In live coverage.

Match wasn’t as good of an opener as the tag match was. MJF destroyed Cross with a Pendulum Piledriver that looked like the finish, but surprisingly wasn’t. Cross won with the shooting star press.

This match isn’t good. Amell is tired and you can tell he’s thinking of what to do next rather than just going with the flow. It’s kind of messing with Daniels too. They were fighting on the top and Amell pushed Daniels off who just so easily rolled onto a table that was perched. Amell dove off and crashed and burned once Daniels moved.

Jerry Lynn was the referee and got involved making you think Amell was going to win, but it was for naught. Daniels hit the Best Moonsault Ever for the win.

They shook hands after the match.

Magnum TA and Tully Blanchard were out during Tessa’s introduction.

This was a hot mess, just like Chelsea’s character. There was some really fun parts of this match. They all worked super hard. But it was also really sloppy.

Tessa won with a Hammerlock DDT, but it looked like either the other two women were supposed to break it up, or they weren’t supposed get so close to breaking it up. Weird finish.

All the women looked good in spots, especially Tessa and Chelsea, but there were rough spots too.

Alongside Brandi, walking Cody down the aisle was DDP, Tommy Dreamer, and Brandi’s dad. Coming down with Aldis was Jeff Jarrett, Daivari, and the former champ, Tim Storm.

Earl Hebner is the referee.

Crowd is super fired up for this match. It was presented like a serious real world title match. Cody came off the top rope to the outside and Aldis blasted him. Hebner put his hands up in the X like Cody was really hurt. DDP came down to slip Cody the gimmick so Cody could blade.

Daivari came out to tell Earl to stop the match and started pushing Earl around. That set up DDP giving Daivari the Diamond Cutter.

Cody didn’t sell the blood all that much and hit a powerslam for a two count. Aldis put the Sharpshooter on Cody which made me nervous considering who the ref is. Brandi was pleading with Cody. She then protected him in the ring as Aldis dove for an elbow off the top rope. He hit Cody, but she protected her man.

Cody hit the Beautiful Disaster kick and the Cross Rhodes for a two count. Cody went for a Vertebreaker, but Aldis blocked it. Aldis went for the Sunset Flip and Cody sat down own it and grabbed his legs to pin him.

It wasn’t a great match, though it told a great story.

This match was super ridiculous. Not really my style of match, but the live crowd loved it.

They did anything and everything dangerous that you can believe. Janela did an elbow through a table to the outside. Page did two of his Buckshot Lariats. Lots of stuff on the outside. They used an actual barrell with a Cracker Barrel logo on it.

Joey’s girlfriend Penelope Ford interfered, but then took a superkick from Page late. She also brought out a bag with Page’s talking boots. The phone was also used.

There was also a spot on the stage where Page powerbomb tossed Janela through one table and he barely hit it. I think he was supposed to go through two tables as there was one right next to the other.

Page won with a Rite Of Passage on the ladder and through a table.

After the match, druids dressed up as penises came out as Joey Ryan is back from the dead. Ryan did his entire schtick, penis flip included.

Before the match, Lethal transformed into the Macho Man. He came out with Lanny Poffo. Throughout the beginning of the match, Lethal kept putting Brandi, who was with Flip, into the corner, thinking she was Elizabeth. Brandi then slapped him, snapping him out of it and he’s back to being Lethal.

They played off Savage vs Warrior and Savage vs Hogan. Lethal gave Flip three Randy Savage elbows from the top rope and Flip kicked out of the pin attempt and hulked up. Lethal finally hit the Lethal Injection for the pin.

Bully Ray came down to attack Flip. He kicked Lanny Poffo right in the dick. Colt Cabana came in for the save and they put Bully through the table.

This match was nuts. But I’ll be that snobby wrestling fan and say that I saw 15 matches in the G1 that were probably better than this.

Kenny finally won with a One Winged Angel.

The lights went out and when they came back on, Penta was up and attacked Omega. Only, it wasn’t Penta. It was Chris Jericho in his gear. Jericho attacked Omega and told him that he’ll see him on the Jericho cruise.

This ended up being a really good match, but the crowd wasn’t into the first half of the match. It started out slow and I think the fans were both exhausted and probably waiting for the Bucks. But you knew Okada would pick it up and make it great and he did.

Scurll was working to get the Chicken Wing and he almost got it a few times. Okada was too broad in the shoulders so he couldn’t get it easily. Okada hit a sweet dropkick off the top rope and then finally hit his dropkick to kick off the match.

Marty fired up a couple times to show fight, but in the end, it was a few Rainmaker clotheslines and Marty was done for.

Ibushi and Rey got tagged in early and the crowd popped huge. They had to race home and you could even hear someone give them an audibly loud time queue.

Everyone was great in this match and the only botch I saw was after they gave the series of moonsaults and big splashes on Bandido and Fenix came in to break it up, but came in too late. The Bucks hit the 5 star Meltzer Driver on Bandido for the win.

Super impressed with Bandido as I’ve never seen him before. There was a part in the match where all three luchadors triple teamed Matt Jackson and everything was done so perfectly and Matt was like a bouncing ball in the ring.

Excellent match to end with and they immediately went off air.