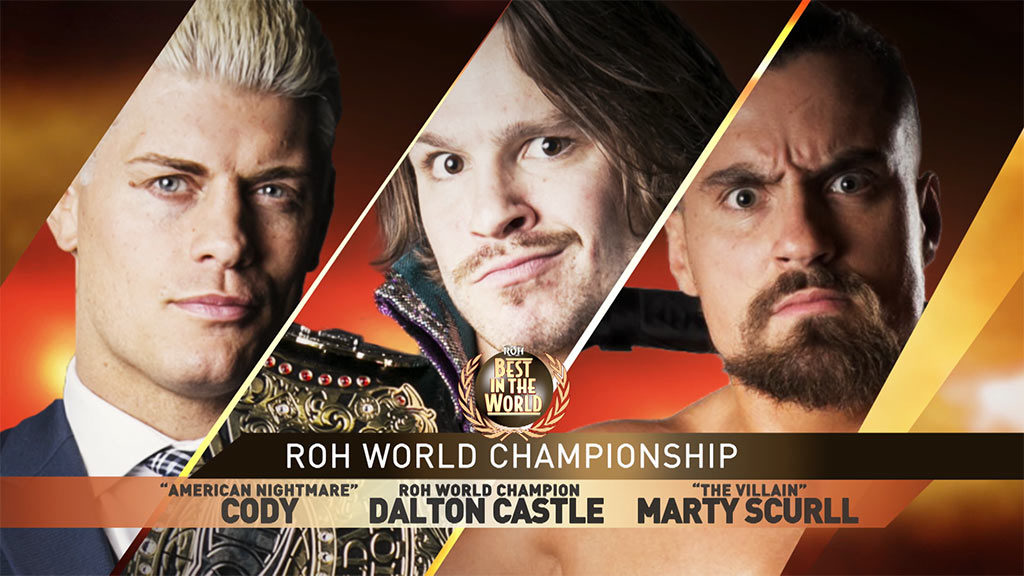 Check out our Best In The World live coverage featuring Dalton Castle defending his title against Cody Rhodes and Marty Scurll in a three-way.

There was a LIJ chant early on. Sanada looks a little thicker than I’ve seen him.

The Kingdom won the match with the Rockstar Supernova on Bushi. That move is weird because I’m not sure what the second party does other than fall on his back.

They tried to do a lot of stuff in a short period of time, so it was kind of clunky and psychology-wise, didn’t make much sense. Sanada had a dragon sleeper locked in and Taven decided to break it up. But rather than just punch Sanada in the face. He looked around, wondering which rope he should hit, then ran toward it and spring boarded off it to kick Sanada. Sanada had to move toward him. It looked silly. That’s how I felt watching the match. It was kind of silly.

The match was Flip flying around and hitting moves while being super surprised when those moves didn’t win the match over the bigger Bully Ray. Bully used a low blow for the DQ.

Bully grabbed a garbage can, but not the old school garbage can. This was more like the kitchen ones. He also grabbed a chair and started hitting Gordon’s legs. Eli Isom came in and was hit with the garbage can. Then Cheeseburger hit the ring and hit Bully with a bunch of punches, but still got beat up and power bombed. Then, as Bully was going to power bomb Flip through the table, Colt Cabana, from his announcer’s position, saved Flip and Bully backed off.

Oedo Tai is Hazuki, Kagetsu and Hana Kimura. I’m not even sure what to take away from this match other than some of the women were good and others looked really out of place. If Dashwood can just put it together in the ring, she can be a star. She doesn’t look as out of place in the ring as she did at times in WWE, but she’s still not near as comfortable in the ring as she could be. I still think she’s got major star quality.

The match was super clunky at times, not unlike the opener, but they weren’t able to quickly hit a move to pop the crowd like the opener was. Near the end, Iwatani and Kimura had some fun back and forth with Iwatani pinning her with a pretty dope dragon suplex.

I’m not too familiar with the storyline, but from what I gather, King and Aries are friends and King has a ton of respect for him, but as a wrestler, Aries doesn’t think he’s in his league. It’s weird seeing the TNA champ on the fourth match of a ROH PPV.

The match was pretty good because Aries is a great heel and gets heat. The crowd was super into the match and treated it like it was better than it was. But it was still fun. I like King a lot, but it’s mostly because of his personality, both from coming up through Tough Enough and also through his stint on the Bachelorette. But I feel like he’s coming into his own in the ring too.

The storyline hurt him a bit in this match because there were several moments where he could’ve gone for the kill with Aries, but chose not to. Though, if King wins the feud in the end, it’s a natural progression.

This was the best match of the show so far. Kushida was trying to set up the arm bar and sunk it in both on a dive and on a Macho Man elbow. Lethal took most of the match with Kushida selling for him. He was going for the Figure Four and breaking him down.

Not a whole lot of flying and it wasn’t a juniors kind of match. Just a smart, well-worked match with Lethal winning after hitting the Lethal Injection.

This was a good street fight, though like most street fights, they took more punishment than necessary including an absolutely not needed spot with thumbtacks near the end.

Martinez set up four chairs with two chairs across it to create a harsh landing platform for someone to hurt themselves on later in the match. And even though we all knew that someone was taking a bump on those chairs, they camera man still missed it when Martinez hit a big boot on Page who was on the apron.

They were hitting each other with chairs early on, but the crowd wasn’t into it. Maybe it’s because they saw Bully go to town on skinny guys with chairs earlier in the show. But then Martinez used a zip tie on Page’s hands and the crowd was behind Page fighting from behind with his hands zip tied. He finally made his comeback and then the zip tie just fell off. Whoops.

The match ended after Page back dropped Martinez into the tacks. But it didn’t matter because Martinez choke slammed him through the table. Martinez covered Page by laying on top of him, but in doing so, his shoulders were clearly down as well, but nothing came out of it. It was a weird pin.

The Briscoes Vs The Young Bucks

This was a wild, wild match, but very good. Briscoes dominated early and every time the Bucks made a comeback, they’d get the upper hand again. Created a fun atmosphere with the crowd.

Bucks finally got on a roll and went for their myriad of finishing moves. They hit the More Bang For Your Buck and one of the Briscoes (I will never get Mark vs Jay right, much like the Usos) hit the referee with an elbow drop, which was a bit weird because the referee was letting all the double teaming go.

He brought a chair in and started to swing it, but both Bucks ducked it and hit him with a double super kick to the face. Later, the Bucks hit the Meltzer Driver, but the pin was broken up.

Jay hit the Jay Driller on Matt on the chair, which didn’t look all that great because you can’t really do that move on a chair. They then did what looked like a double teamed Razor’s Edge with a neck breaker for the win.

Poor Castle looks like hell. He can’t be healthy. His hamstring is taped and he’s moving around so slowly. Cody and Marty were sort of working together, but then Cody grabbed his hair bun and shit was on. Scurll was about to do Goldust’s low blow kick, but Brandi interfered and then Cody kicked Marty low.

NWA champ Nick Aldis is watching from ringside. He interfered and he, Brandi, and the Boys were kicked out.

The last five minutes were hitting big moves and kicking out, including Scurll hitting the Cross Rhodes on Cody. Surprisingly, Castle hit the Bangarang on Scurll to win the match.

I thought Cody was surely winning this match, especially with Aldis sitting ringside.