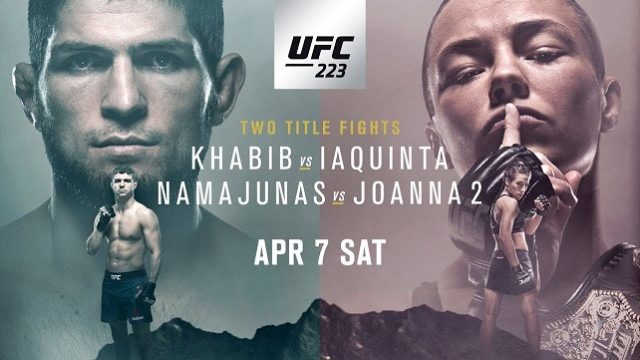 The show has gone through so many changes over the last couple of days, but we’re still here for UFC 223 live coverage. Can Raging Al do what his coach did 11 years ago?

We went from Khabib vs Tony Ferguson to Khabib vs Max Holloway to Khabib vs Paul Felder and Anthony Pettis to finally, Khabib vs Raging Al Iaquinta. What a few days.

This show is so crazy only two of the original main five fights are still on the card.

This was a very entertaining back and forth first round. Lauzon was getting the better of the strikes early on, landing with his right hand and also elbows from the right side. He also landed a knee. Gruetzemacher waited him out as he got tired and landed a couple big punches, including an uppercut that sent Lauzon’s head back.

Gruetzemacher walked him down immediately and started popping him with combinations. Lauzon was blocking the punches with his face. Lauzon was bleeding worse than just about anyone you’ll see in a UFC fight. Gruetzemacher could’ve tried to put him away, but Lauzon was game, so he stayed course. Lauzon’s corner should stop this fight.

Winner: Chris Gruetzemacher by way of 2nd round TKO

Bochniak is coming out with lots of head movement, treating it like a boxing match. Magomedsharipov is super long and is able to keep him at a distance. But Bochniak is still throwing some big shots and barely missing. Magomedsharipov is too smooth for Bochniak though. Add the length to his great footwork and he’s going to win most exchanges. He landed a nice switch kick. You get the feeling that he’s going to wear Bochniak down.

Bochniak gets points for hanging in there and trying to get the crowd behind him because of his toughness, but he’s getting outskilled. He’s going to need a Hail Mary in the third to win. Magomedsharipov is the much better fighter here and he’s showing up.

Bochniak came out screaming and woooing with his face all bloody. Magomedsharipov suckered him twice. He landed a counter spin kick which was ridiculous and then used Bochniak’s charisma against him by suckering him into a takedown. This guy is ridiculous.

Kattar came out strong with some nice punches, especially a strong right hand. But he couldn’t stop the leg kicks. Moicano won the round with the kicks, which started to take some steam off Kattar’s punches.

It was more of the same. Moicano was landing kicks up and down the body. He landed a head kick, a body kick, and then leg kicks. Kattar changed stances and was eating kicks to the other leg as well.

Moicano opened up in the third. Rather than stay with the leg kicks, he started throwing his right hand with uppercuts and big overhand rights. Kattar is bleeding from his nose and taking huge punishment, but he’s tough. Moicano is winning this third round running away.

Namajunas looks great. She’s moving around the cage like an ice skater. Jędrzejczyk moves back and forth like a kickboxer. Namajunas is more effective in her movements and is landing punches at angles that Jędrzejczyk is having a hard time seeing. Jędrzejczyk ended strong, but this was Rose’s round.

Jędrzejczyk was better in the second, but I think Namajunas took the second as well. She landed the best shots, which were left hooks that Jędrzejczyk didn’t see coming. Jędrzejczyk may need to change up her cadence with her punches too because Rose may have it timed.

Just as I said that about Rose knowing her cadence, Jędrzejczyk switched it up. She started throwing a ton of leg kicks and Rose was feeling them. Because of them, Rose was caught leaning a couple of times and Jędrzejczyk countered her with a one-two combination. I think Joanna got her first round.

Jędrzejczyk picked up more steam. Namajunas’ left knee is swollen from the leg kicks and it’s affecting her movement. I also think she’s not able to be as wide with her angles because it’s harder to run around kicks than punches. Namajunas had some good success with inside fighting. Her left hook is still landing. I have it 2-2.

Jędrzejczyk’s eyes and nose are busted up. Namajunas has decided to sit down on her punches and her exchanges are effective. This round is split dead even with the striking. Both are landing. And then with 30 seconds left, Namajunas shot in for a takedown and got it. Maybe the takedown gave it to Rose? That last round was damn close.

The scores were 49-46 on all three cards for Rose.

Nurmagomedov pretty much dominated the entire round. He took him down twice and kept him down and wouldn’t let him breathe. When he would get back to his feet, Nurmagomedov would lean on him and push him around. Didn’t look like too much fun for Iaquinta.

It was a lot of the same, except that Nurmagomedov had Iaquinta’s back and was looking for the choke all round. Credit to Iaquinta who didn’t give it up. Iaquinta has had to fight so defensively that he hasn’t done anything offensively.

For some reason, Nurmagomedov decided to stand the entire round. He peppered Iaquinta with jabs and won the round, but Iaquinta was much more comfortable on the feet and not having to fear for his life.

The fourth round was much like the third. Iaquinta had a better shot on the feet, but was still being outlanded. Nurmagomedov was landing more than one punch and Iaquinta was landing one at a time. The crowd is clearly behind Iaquinta and he’s gaining confidence. Not sure why Nurmagomedov isn’t just pressing the wrestling.

Nurmagomedov didn’t get another takedown until about 2 minutes left, but once he did, Iaquinta couldn’t do anything except for fight the choke, which he did. But Nurmagomedov wins this fight going away.