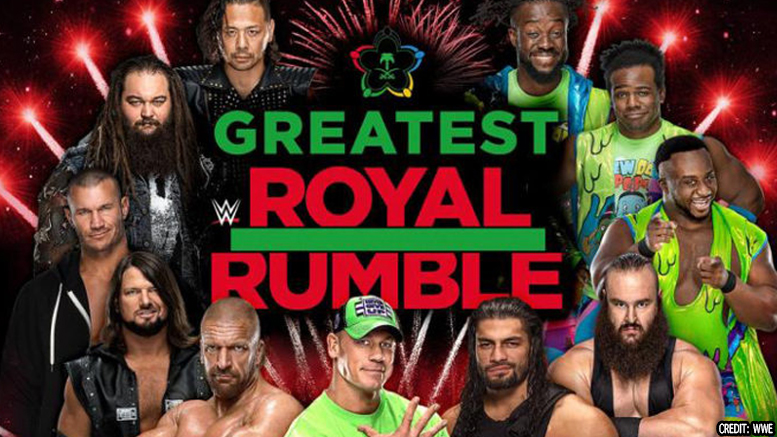 
This is quite an interesting show from Saudi Arabia. There’s been a lot of negativity surrounding the show, but it’s now here.

Outside of the propaganda angle, what this event can show as a test is if WWE can run big events from other countries and not worry about what time the show is in the US.

The match started out with a Greco Roman knuckle lock. Really. I wouldn’t consider this a good match. It was also pretty sloppy which isn’t what you normally get with a Triple H match, but is what you get with Cena.

Cena pretty much dominated the match. He was using both the Attitude Adjustment and the STFU to wear Triple H down. Cena hit the AA and Triple H kicked out. Then later in the match, he hit another one, threw Triple H into the buckles, and then hit him with another AA for the win.

The match was very average. There’s a hint of fakeness with the announcing because they’re trying to make it like there’s a lot of stakes with this show and it’s coming off as a super glorified house show.

The thing that came out of this match is that they need to focus on Kalisto a bit more. He was excellent in this match. They had some timing issues, but the chemistry between them was there. Alexander hit him with a sweet drop kick. They had one submission spot on the mat, which they shouldn’t have done because this crowd doesn’t want to see those kind of holds.

Kalisto went for the Salido Del Sol, but Alexander transitioned and hit the lumbar check to win.

Matt Hardy and Bray Wyatt Vs Sheamus and Cesaro

I didn’t know if he was going to be able to do it, but Matt Hardy got the crowd to chant “Delete!” to start the match.

The match was pretty flat, though Bray and Matt are a fun team. Late in the match, Sheamus stalled. Maybe he was looking for a crowd reaction. Bray Wyatt his the Sister Abigail on him and then he tagged in Matt Hardy to hit the Twist Of Fate to win. Wyatt grabbed Sheamus’ legs to help Hardy turn it into a double team move. We have new Raw tag champs.

Oof. This match sucked. You had Jeff Hardy in slow motion. You had Jinder Mahal in the wrong place or clearly moving into the right place. Thankfully, it wasn’t that long and Jeff Hardy hit the Swanton to win it. There was a weird spot where Hardy tried to hit it and then missed, but Jinder sold it as he hit it. Very clunky.

During the intermission (which I believe was for prayer), Chris Jericho and Daniel Bryan cut promos to silence. That was weird.

The Usos Vs The Bludgeon Brothers

That was quick. This was pretty close to a squash match. They avalanched Jimmy Uso in the corner and then hit their powerbomb finish for the win.

This show kind of sucks.

Seth Rollins Vs Samoa Joe Vs The Miz Vs Finn Balor

This is the best match by far. Having Jeff Hardy beat Jinder means that either Seth or Finn is going to win here. The crowd is reacting at least. They’re not going crazy, but they’re getting a response. There was even a “This is awesome!” chant.

All the guys were really good in the match. There weren’t super crazy ladder spots like in the NXT ladder match WrestleMania weekend. But the psychology was solid.

Miz tried to get Samoa Joe to work together with him since they’re both heels and both on Smackdown, but Joe shoulder blocked him down.

Near the end of the match, Joe was knocked off the ladder and Miz was outside the ring. It looked like Balor had it all to himself. He climbed the ladder, but Rollins catapulted himself onto the ladder from the outside and raced up to grab the belt and win the match.

When Seth pulled the belt down, he caught Finn over the eye and busted him open.

They did a video package on a training that was happening in Saudi Arabia. They showed four of the prospects in the ring and introduced them.

Then, the Daivari brothers came out holding the flag of Iran. They came into the ring brow beating the prospects until they got their comeuppance.

This match might be better than their WrestleMania match. The heel/face dynamic definitely changes the psychology for the better.

They had some pretty cool striking sequences. AJ went for the Calf Crusher, and unlike earlier in the show when they didn’t react to any of the submissions on the ground, they popped for it.

AJ went for the Phenomenal Forearm, but Nakamura ducked it and AJ nearly hit the ref. Nakamura snuck up behind him for the ball shot and a two count.

Then, for whatever reason, they brawled to the outside and were counted out. Bleh.

Rusev Vs The Undertaker

The weird thing about the match is that Rusev had to sit in the casket like he’d been killed from a chokeslam. And then he gave both moves to English.

Both guys attempted to climb the cage. Reigns hit a spear and then another. He hit a third and Brock kicked out.

Brock had a chair and went to hit Reigns with it, but Reigns ducked it and hit a spear. Brock kicked out again. Reigns speared Brock again, but Brock was against the cage. The spear broke the cage and both men went through the cage to the outside. The match was stopped and Brock was declared the winner.

Daniel Bryan is in first. Dolph Ziggler is in next. Sin Cara is in at number three. Ziggler eliminated Sin Cara. Curtis Axel is in fourth. Big Mark Henry is fifth in. Henry tossed out Axel. Mike Kanelis was next, but he was immediately eliminated by Mark Henry. This was in Santino territory of elimination. Hiroki Sumi is next and I have no idea who that is. He’s supposedly a sumo wrestler. Henry tossed him out and then Bryan and Ziggler tossed Henry out. Victor of the Ascension is 8th. So far so good as he’s lasted longer than Kanelis. Well, not too much longer. It’s back to Bryan and Ziggler. Kofi Kingston is 9th. Tony Niese is 10th.

Dash is 11th. Currently, Dash, Niese, Kofi, Bryan, and Ziggler are in the ring. Hornswaggle is next in. Dash was tossed out right when he came in. Niese kicked Hornswaggle out. Primo Colon is 13th in. Xavier Woods is in next. Niese tried to dance with Woods and Kofi and they tossed him out. Bo Dallas is the 15th man in. Kurt Angle is in 16th. He’s giving German Suplexes and eliminated Primo and Bo. Then Ziggler charged him and Angle tossed him over the top. Dawson is in 17th. Goldust is 18th. Konnor is 19th. Elias is 20th.

Elias started singing, but stopped because he saw the opportunity to dump Konnor, Kofi, and Xavier all at the same time. Luke Gallows is 21st. Bryan and Angle are going after each other. Angle tossed Angle over his head, but Bryan rotated over and started his kicks. Angle hit the Angle Slam. Then Elias tossed him out. Rhyno is 22nd. Drew Gulak is 23rd. Tucker Knight from Heavy Machinery is 24th. Gulak was on Knight’s back and Knight dumped him. Roode is 25th. Goldust was tossed. Roode catapulted Dawson into the corner and Dawson jumped and tossed himself out. Fandango is 26th. Chad Gable is 27th. Rey Mysterio is 28th. Rey tossed out Gallows with his legs. Mojo Rawley is 29th and he immediately tossed Fandango out. Tyler Breeze is 30th.

Rawley tossed Breeze out. Big E is 31st. Big E tossed out Knight. Karl Anderson is 32nd. Apollo Crews is 33rd. Crews tossed out Gable. Roderick Strong is 34th. He came in like a house of fire. He gave out back breakers and then tossed out Rhyno. Randy Orton is 35th. Orton hit a RKO on Crews. Then tossed out Anderson and Rawley and then Crews. Heath Slater is 36th. Babatunde is in at 37th. He’s in NXT paired up with Lio Rush. Baron Corbin is 38th. Corbin tossed out Bobby Roode and then Roddy Strong. Titus is 39th. He tripped on his way to the ring and slid underneath the ring. Dan Matha is 40th.

Braun Strowman is 41st. Strowman tossed Babatunde and Matha. Then he tossed out poor Big E. He was tossed out. Tye Dillinger is number 42. Titus and Dillinger were tossed out. Rey and Orton worked to finally drop Strowman. Corbin eliminated Rey Rey. Then Orton eliminated Corbin. Then Elias eliminated Corbin. Curt Hawkins is number 43. Hawkins tried to run away but Strowman ran after him and caught him. Bryan was out of the ring, but in the match and Strowman ran over him. Strowman got Hawkins out. Bobby Lashley is 44. Lashley dumped out Elias. Lashley and Strowman went toe-to-toe. Bryan came back in and gave them both drop kicks into the corner. The Great Khali is 45th. Strowman and Lashley tossed out Khali. Kevin Owens is 46th. Shane McMahon is 47th. Bryan and Shane-O gave kicks to Owens. Shelton Benjamin is 48th. Big Cass is 49th. Shane gave Braun the coast to coast drop kick and looked like he killed Braun and himself. Chris Jericho is 50th.

Jericho hit Benjamin with a code breaker and then clotheslined him out. Jericho then put Owens in the Walls of Jericho. Cass kicked Jericho right in the face. Lashley tried to give Cass the delayed vertical suplex, but lost him. He got him up again and then dropped him on his head. That looked dangerous. Bryan hit Owens with a running drop kick and then told Shane to get him. Shane went to the top rope and Strowman tossed him off and through the announcer’s table. Shane is out. Strowman then dumped out Lashley. Strowman then tossed out Jericho. And then Owens. Bryan tried to toss out Strowman. It’s down to Cass, Bryan, and Strowman. Cass hit Bryan with a big boot and then tossed him out. It’s down to Cass and Strowman. Cass tried tossing him out, but Strowman crotched him on the top rope and then shoulder blocked him out. Thankfully, this match is over.