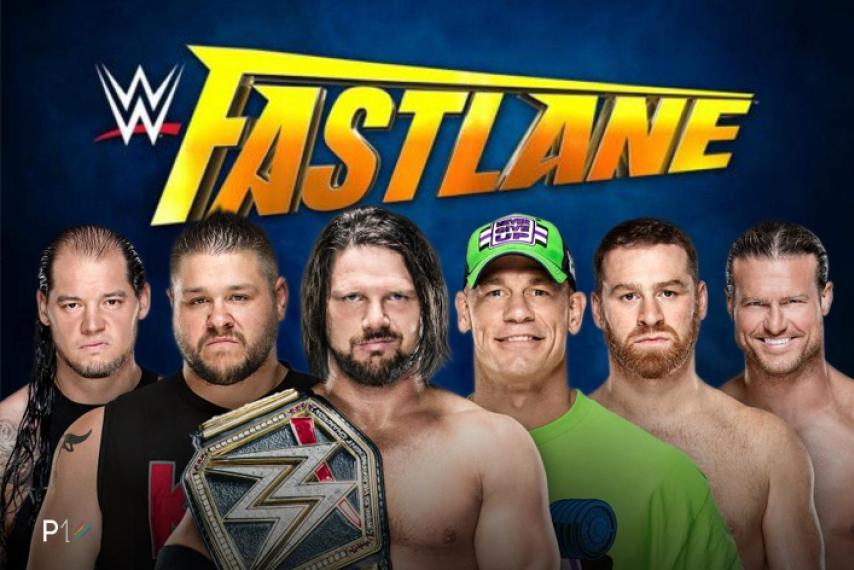 The card in of itself doesn’t look strong. There are only 6 matches on the show, which means more than just the main event are going long, there are going to be some interview segments, or maybe there will be some angles coming out of the show.

While they may also do it on Raw, there’s something that could happen with John Cena and the Undertaker. Also, Asuka still hasn’t chosen which title she wants to fight for at WrestleMania. If it’s the heavily rumored match with Charlotte, she could do it tonight.

We’ll be back with Fastlane live coverage.

On the pre-show match, after calling Breezango and Tye Dillinger all jokes and disappointments, Mojo Rawley lost the fall for his team (with Shelton Benjamin and Chad Gable). Joke must’ve been on him.

Nakamura won a long-ish opener at 14 and a half minutes with the Kinshasa. Right before that, he went for one and Rusev met him with a kick of doom. This was awesome with great camera work.

Rusev is the second most sympathetic babyface on the roster after Johnny Gargano.

Nakamura worked on Rusev’s leg early and he was limping. He went for the Accolade right before Nakamura slipped out and hit his finisher for the win. This was a fun opener.

This was a really good match, but it was often too slow for its own good, though, that was expected. Orton won after Roode, who had done just about everything save for hit his Glorious DDT, couldn’t put him away. He went to the middle rope and dove at Orton head first and Orton turned it into a RKO. Orton is the new US champ.

Jinder Mahal attacked Orton after the match and Roode gave him a Glorious DDT. He then gave Orton one as well.

Roode hurt his ribs early and had to sell them throughout the match. He couldn’t do certain moves because of it. Orton hit a sweet superplex. That move always looks great when he does it.

Becky Lynch and Naomi Vs Carmella and Natalya

Carmella and Natalya kept Naomi in their corner for a lot of the match to set up the hot tag to Becky. It was Becky and Carmella in the ring and Carmella tried to get Natalya to use her Money In The Bank briefcase to hit Becky. Instead, Becky was distracted, then turned around and ate a Superkick.

New Day Vs The Usos

It’s Xavier Woods and Kofi Kingston for the New Day.

Then for some reason, the Bludgeon Brothers came out. They killed both teams. Like killed them both dead with their mallots. They powerbombed Woods on the steps.

Riott hit her kick for a near fall. Then the Riott Squad tried to get involved, which led Becky and Naomi out to ringside.

I would say that this was a fun match rather than a good match. The referee threw both teams out to make it a one on one which is always a good thing for the babyface

Charlotte hit a spear and then put Ruby in the Figure 8 for the win.

After the match, Asuka’s music played. She did her full entrance, went up to Charlotte, heaved her shoulders up and down and then pointed to the WrestleMania sign.

Shane McMahon is sitting on a chair near the ring.

Cena started out hot, hitting multiple AAs, but then it came back to haunt him as the other five guys decided to team up and beat him up and toss him out.

The match is chaotic. Corbin went outside to go after Ziggler and did a shoulder tackle right into the plastic boards like you’d see at a hockey game. Owens was going to do something to AJ on the announcer’s table, but AJ hit an enziguri on him. Cena then gave Styles an AA through one of the tables. He rotated so that he took it right on his ass.

Owens and Zayn were left in the ring together. Zayn told him he was going to lay down for him like he said he would in a segment earlier on the show. Zayn went to his back like Jeff Jarrett and Owens went to cover him. But Owens didn’t trust him and grabbed him to pull him up to beat him up, but Zayn small packaged him for a two count.

Zayn saw Shane McMahon sitting ringside. He started to berate him. Shane stood up. Owens went to Superkick Zayn, but Zayn moved out of the way and he kicked Shane right in the chops. Owens hit the Pop-up Powerbomb on Ziggler, but Shane pulled the ref out of the ring. Then Zayn hit Owens with a Helluva kick. Zayn covered Owens and Shane pulled him off.

Near the end, Cena hit Ziggler with a AA and then was going to give him another one, but Owens interfered and gave him a Pop-Up Powerbomb. AJ Styles then hit Owens with the Phenomenal Forearm and got the pin. That was a really good match.