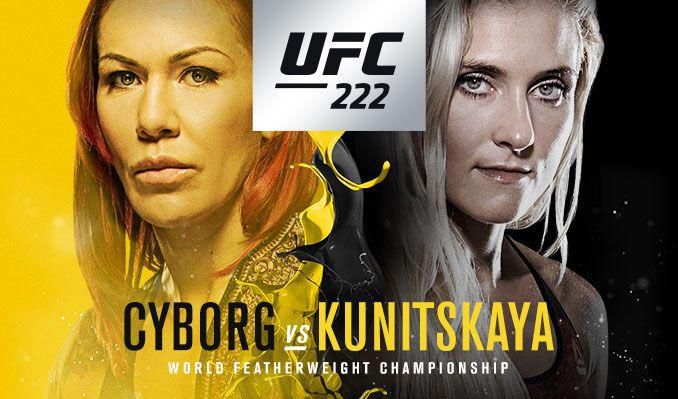 Check out our UFC 222 live coverage.

It’s yet another UFC show in which the main event was changed because of injury. Rather than Max Holloway defending his UFC Featherweight championship against Frankie Edgar, the main event is now Cris Cyborg facing off against a somewhat unknown champion from Invicta FC, Yana Kunitskaya.

Frankie Edgar is still on the card, facing Brian Ortega with the winner getting Max Holloway when he’s healthy.

In the main event of the prelims, Mackenzie Dern beat Ashley Yoder via split decision.

Zingano looks rusty, which is to be expected. She didn’t have great head movement and was losing the standup game. She got a takedown, but ended up on the bottom near the end of the round.

At the start of the second, Zingano rushed Vieira, who then caught her head and flipped her. Zingano couldn’t get up from the bottom for the rest of the round. Vieira’s top game was excellent.

The fight shouldn’t have been a split decision. Cat looked overwhelmed when they were announcing the decision.

Arlovski did a great job with the inside leg kicks. The left thigh of Struve’s was beet red. Arlovski also took Struve down a few times. Struve’s stand-up was ineffective as he wasn’t able to throw his jab. Every time he tried, he was covering up or avoiding something. He couldn’t get off first.

In the second, Struve was better with his positioning, but still lost the round. He had Arlovski in a German suplex position, but Arlovski grabbed the fence to stop the takedown. Struve accidentally poked him in the eye. I guess it was payback.

Thankfully, this fight is over. Struve got poked in the eye. That wasn’t payback. It took a minute or so for Struve to get his vision back. Struve got in some leg kicks, but then was taken down again.

Soukhamthath came out firing and did well early. He scored a takedown, but had to fight off O’Malley first with a triangle and then with an arm bar and then with a guillotine and finally with a rear naked choke before the round ended.

Weird third round. O’Malley was outclassing him, but Soukhamthath was game. O’Malley threw a kick that was blocked and O’Malley was in pain. He may have hurt his foot. He was hopping up and down on it and had to go to the ground. Soukhamthath decided to take it to the ground and didn’t want him back up. O’Malley should win the fight, but he’s in a ton of pain.

Ortega knocked out Edgar in the first round. Talk about the finish that I’d never think would’ve happened for this fight. He rocked Edgar with an elbow and Edgar wasn’t able to shake it off. Ortega landed an uppercut that sent Edgar into tomorrow.

Winner: Brian Ortega by way of 1st round TKO

Kunitskaya threw an early kick and fell right into a right hand. It looked like the end was near, but she grabbed a low single and took Cyborg down. She tried to get her back, but Cyborg shook her off. Back on the feet, Cyborg knocked her down, and then again and Cyborg finished her on the ground.