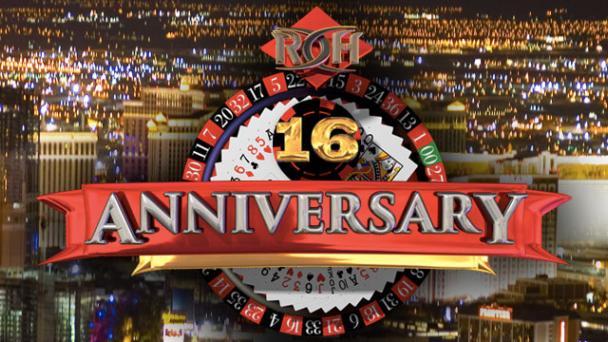 ROH 16th Anniversary show started with a wide shot of Bully Ray in a crouched position with the camera man in the ring. It lasted like that for a few seconds. I don’t think the show was supposed to start that way.

Then Bully Ray tried to get the crowd fired up. He said that he’s going to grab the fans by the throat and rip it out and give them their money’s worth. I don’t think he got that saying right.

Early offense went to Gordon who tossed Takahashi outside and did a dive through the ropes. Takahashi came back with two missile dropkicks, one off the apron and to the floor. Takahashi brought Gordon back into the ring and then hit him with Darryl.

Gordon is super athletic. Takahashi hit him with a flip over piledriver and as he was taking the bump down, he hit him with a faint super kick. He hit his Star Spangled Stunner, but got a two count. He went for the 450 Splash, but Takahashi got his feet up. Takahashi eventually hit the Time Bomb for the win. It was a good opener. Didn’t steal the show, but set it up nicely.

Martinez did a springboard dive out to the floor. It looked like a brutal catch for Scurll, but he kind of just rolled over on his shoulder. At some point, Scurll got his eye busted open.

Scurll was chopping him down, going after his legs. He went outside to argue with the referee and security guards and Martinez dove out on top of everyone. It looked pretty sweet.

Martinez set Scurll on a table outside the ring. He was going to do the second rope springboard flip dive again, but Scurll moved and he went through the table. The timing wasn’t the best on it. Scurll tried to break his fingers, but he powered out of it. Scurll was stomping on the back of his head and then Martinez sat up and no sold it. Scurll grabbed a bag and pretended to throw powder at Martinez. He psyched him out. But then kicked him low and rolled him up.

Young hit the the Mizery on The Bachelor Kenny King, but the referee was knocked down. King was able to kick out. And then King hit his Royal Flush for the win.

After the match, Austin Aries came out with a bunch of belts on his shoulder and said that he has never held the ROH TV title. He challenged King. It looks like it’s going to be TNA vs ROH.

SoCal Uncensored Vs The Hung Bucks

These guys hit everything but the kitchen sink. The moves were fast and furious and I got stuck watching and not writing and it’s impossible to even remember. Frankie Kazarian is already busted open. Matt Jackson got pushed off the middle rope and through the table. Nick Jackson had a kendo stick placed under his ball sack and Christopher Daniels jumped onto the other side of the stick so it stuck Jackson below the belt.

Scorpio Sky and Kazarian did slingshot stunners on both Bucks and then put them in Dragon Sleepers. Adam Page had a belt that had nails dug into it and hit Kazarian on the back with it. Daniels was dumped over the top and onto barricades stacked to make a table. Matt did a Randy Savage elbow from the top of a ladder onto Kazarian and through a table. Nick did a 450 Splash onto Sky who had a garbage can on top of him. Shane Taylor came in and broke up the pin. He was creating havoc until Page and Matt hit the Rite of Passage on him. Matt tried to slam him at one point and his back went out.

The zip tied Hangman Page to the ring post so it’s a 2 on 3 match (2 on 4 if you count Taylor). The Bucks tried a Meltzer Driver, but Matt’s back went out on him. They put Matt in a Dragon Sleeper, but then used the kendo stick on his neck and put him in a Boston Crab at the same time. Matt tapped.

Bully Ray kept TK and Vinny backstage. But Brandi and Barry The Drug Free Bear were able to stick around ringside.

Long-ish match that built to the referee being knocked out. Then Vinny and TK came out and picked Cody up so that Taven could field goal kick him in the balls. Cody got up unhurt as if he had balls of steel. He then pulled a cup out of his tights and no sold it. Taven was astonished and then Cody hit the Cross Rhodes for the win.

Cody got his ring back. He kissed his wife. Then he went to hug Barry, but Barry pushed him down. Barry unmasked as Kenny Omega who then hit the V-Trigger on Cody. Brandi was upset and slapped him. Then she kissed him. He was confused. I think she’s trying to make Kota Ibushi jealous.

The Briscoes became the nine time champions in a really good match. This wasn’t quite as chaotic as the 6-main tag title match, but it was still chaotic. Early on, Mark was busted wide open. He was a mess.

Lots of dives and big moves, with both teams on fire. Alex Shelley had his Shawn Michaels look going. Near the end, Chris Sabin kicked out of the Jay Driller, but then didn’t kick out of the Doomsday Device.

This was a really good match. Castle’s throws and suplexes are so impressive.

Lethal did a dive outside and hit the ring announcer. The poor guy.

Castle hit Lethal with a German off the apron, but Lethal didn’t take the move on his back. He turned over late and used his arm to post a little, but it looked like he may have grazed his head.

They each spent most of the match setting up their finisher. Castle’s Bangarang was being countered into a Sunset Flip. Lethal finally hit the Lethal Injection, but Castle kicked out for two.

Castle went for the Bangarang again, but Lethal countered, but Castle powered up back into the Bangarang, hit it, and finally got the pin.