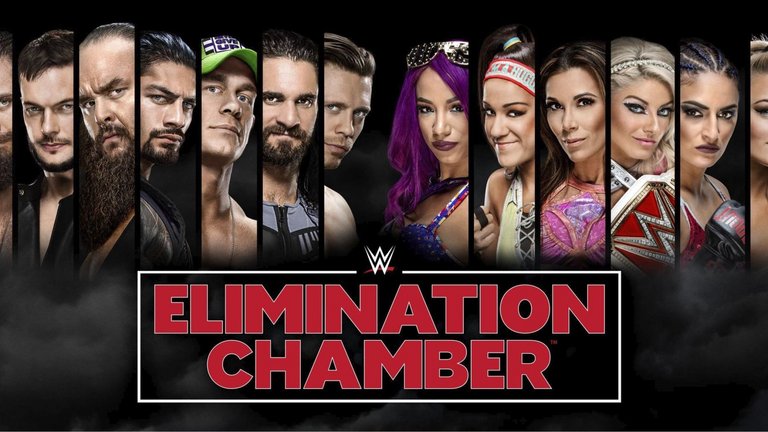 Past Elimination Chamber shows have felt bigger than this, but this show is going to be scrutinized heavily based on how well the Ronda Rousey angle comes off. It feels like many believe she (because of WWE booking) is going to fall flat on her face. I don’t understand all the negativity surrounding it, but it’s there.

The show should be a good one though with two Elimination Chamber matches including the first ever women’s version.

The women’s chamber opens the show.

Bayley and Deville start off the match. The match is super slow. Deville almost looks like she’s counting her steps. Bayley looks a bit slow too. Bayley hit an elbow from the top rope to the outside part of the cage.

Mandy Rose was next so it’s a two on one for Absolution. Bayley fought them off for a bit, but they double teamed her until Sasha Banks came in to make it a Tornado Tag inside a huge cage.

Sasha and Bayley tossed Sonya up against the chain-link cage. Sasha tapped out Mandy Rose in the Bank Statement. Deville went for the save, but Bayley cut her off. Mickie James is in next. There’s three babyfaces in and one heel. But Mickie immediately goes after Sasha and Bayley.

Bayley then hit the Belly To Bayley on Mickie to pin her. It’s now Bayley vs Sasha vs Alexa. Alexa tried to run away, climbing everywhere. They finally caught her. As Sasha was going to help Bayley get up to the pod, she kicked her down. Bayley got Sasha back.

Bliss pinned Bayley with a cradle and it was Sasha vs Alexa. Alexa hit the Twisted Bliss onto Sasha from the top of the pod to the outside. Banks turned it into the Bank Statement. Bliss got out of it and hit a draping DDT with Banks on the top rope.

Bliss did a babyface interview with fake crying before turning on the fans. The story was also that Sasha was possibly at a crossroads.

Titus and Apollo Vs Sheamus and Cesaro

I know that Titus and Apollo have beaten the champs before, but it was hard to take this match seriously. It was fine for what it was, but Titus and Apollo aren’t viable enough to make it interesting. They pinned Apollo after a double team White Noise.

Nia Jax stepped on Asuka’s mask so I guess that match is next.

The booking was interesting here. Basically, Asuka pulled the match out of her ass after getting it beat for the entire match. She got one arm bar spot in there, but otherwise sold, sold, and then when Jax went for a powerbomb, did a hurricanrana into a rollup for the win.

Jax then destroyed Asuka afterward. She speared her through the barricade.

Hardy won what felt like a long match, but was really less than ten minutes. The crowd was disinterested as there was a beach ball in the crowd that was taken away. During Wyatt’s offense, the crowd chanted for the beach ball and for Rusev Day.

Hardy won the match with a Twist of Fate after Wyatt was trying for the Sister Abigail.

It’s Ronda Rousey time. Kurt Angle came out and was followed by Stephanie McMahon and Triple H. Stephanie kicked it off to Ronda who didn’t seem well prepared. She said that Rowdy Roddy Piper was her hero. She wants to earn the crowd’s respect and doesn’t want to be given anything.

Triple H said that Ronda was going to be signing a contract not only to be in the WWE but to wrestle at WrestleMania.

She was about to sign her contract and Triple H and Kurt were talking. Ronda asked Kurt if he had something to say. Kurt said that Steph and Triple H just want to manipulate her to get her back since WrestleMania 31. Triple H said that Kurt hasn’t been feeling well and had the flu. Stephanie said that they were impressed with her at Mania 31 and they want her in the WWE. Kurt then said that Stephanie said Ronda was a has-been and could take Ronda.

Ronda put her mean face on and walked down Steph. Then Triple H saved her from a beating. Triple H walked back into the ring and went to stare her down and she suplexed him into the table. Stephanie slapped Ronda right in the face and then walked out. Ronda then signed the contract.

Best part of the entrance so far:

Seth seems really over right now. He did a double Blockbuster off the top rope. Cena came in next and the double 5 Knuckle Shuffle on Rollins and Miz. It was up there with some of the worst things he’s ever done. Reigns was in next. Miz did his Daniel Bryan kicks to everyone. Reigns ducked one and hit a clothesline on him. Reigns then powerbombed him. Still no eliminations yet. Braun should be in next and then Elias.

Braun chased Miz around and followed him up the cage and onto one of the pods. He slammed his face against the plastic a few times and then tossed him off the top and onto the rest of the guys.

He hit the powerslam on Miz and Miz is out. The rest of the guys are quadruple teaming Strowman. They gave him the Shield Powerbomb and almost pinned him. Then everyone hit their finishers on him. Cena gave Reigns the AA. Then Finn hit Seth with a cross body to the midsection. Elias is finally in and trying to pick up the pieces.

Elias tried putting Strowman on his shoulders and couldn’t hold him. Then Strowman gives him the powerbomb and he’s out.

The remaining five are Strowman, Reigns, Cena, Rollins, and Balor.

Cena tried a high cross off the top on Strowman. Strowman caught him and powerslammed him and Cena’s out. He’s just a guy.

Balor was getting the best of Strowman, but got eliminated anyway. He gave Roman the Coup de Grâce, but Strowman picked him up and powerslammed him and pinned him.

It’s Roman vs Seth vs Braun. Seth hit a Froggy Splash from the top of the pod. Then hit a ton of Superkicks. And then went for the Curb Stomp, but Braun caught him and powerslammed him. It’s Braun vs Roman.

Roman dove out on Braun. Braun ran at him but he moved and Braun went through the pod. Roman hit a couple of Superman punches and two spears and won the match.

Strowman left Reigns laying with a powerslam and then tossed him through the pod window.