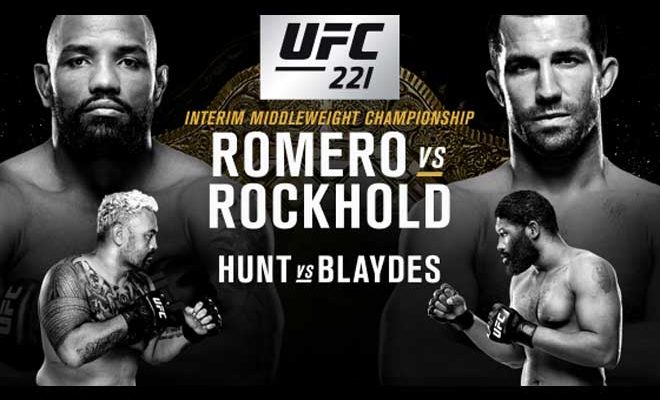 Check out our live coverage of UFC 221: Romero vs Rockhold.

The show tonight comes from Perth, Australia and was originally scheduled to be main evented by hometown champion Robert Whittaker and Luke Rockhold. In mid-January, Whittaker pulled out of the fight because of injury and Yoel Romero was chosen as his replacement.

Yesterday, at weigh-ins, Romero weighed in 2.7 pounds over the weight limit. Dana White said that Romero will still fight, but if he wins, he won’t be the interim champion. The interim belt is only on the line if Rockhold wins. Rockhold will inherit 30% of Romero’s purse.

Other than Mark Hunt, who fights Curtis Blaydes in the semi-main, there aren’t really any other name fighters on the show. Ross Pearson, who fights in the main event of the Fight Pass card, might be the fourth most well-known fighter on the show.

Here are the FGB crew’s picks for the show:

We’ll be back later with play by play of the live card for UFC 221: Romero vs Rockhold.

Pedro dominated Safarov. He’s a much better athlete. He staggered him early, but Safarov was game and continued to come forward and try for takedowns. On the ground, Pedro swept him into a kimura. Safarov didn’t tap, but then Pedro put his leg over his head and stretched it out and Safarov tapped.

Matthews landed some big punches in the first round including putting Jingliang on his back and landing bombs. Jingliang was tentative as he didn’t want to stand there and trade and it hurt him. Matthews landed a beautiful counter left hand.

Jingliang landed a nice combo to start the round that buckled Matthews. It was as if Matthews walked into a wall. Matthews took him down and went for a choke. Jingliang poked and hung onto Matthews’ eyes, causing a cut. Surprisingly, Matthews wasn’t bothered by it. Jingliang won the round slightly.

Matthews took Jingliang down a couple of times and Jingliang couldn’t really do too much. He’s going to win the decision.

Tuivasa just unloaded on poor Asker. Asker was popped and then just laid against the fence like a heavy bag. Tuivasa continued to wail on him until Asker didn’t have the fence to hold him up again and went down like a sack of potatoes. Then it was stopped.

Winner: Tai Tuivasa by way of 1st round TKO

Blaydes has a decided reach advantage as well as an athletic advantage. He was in and out with his boxing, though, he didn’t really come close to hitting Hunt, not wanting to get inside. He got a takedown from way deep, but Hunt powered back up. Blaydes got a little too comfortable and Hunt tried to time him with a right hand. He didn’t land it, but it looked like he had figured out Blaydes’ timing. Just like that, he nailed Blaydes who staggered back. Hunt hit him with two more big shots and it looked like Blaydes was about to go out. But Hunt missed a wild shot and Blaydes took him down and then did so again, getting full mount and then Hunt’s back before the round was over.

Blaydes fought a smart second half of the round. It was a stalemate for the first half and Blaydes took Hunt down and held him down for the rest of the round. He didn’t do much on top, but neither did Hunt from the bottom. It’s probably tied at one round apiece headed into the final round.

Blaydes started the second with two takedowns including a side slam that looked like it hurt like hell. Blaydes stayed on top of him and Hunt wasn’t doing much from the bottom. He got up a few times, but Blaydes took him right back down. Blaydes is winning this one.

Safe first round for both guys. Rockhold threw a kick that Romero checked and Luke’s shin was all bloody. Romero was playing a bit of possum, almost fighting lackadaisical. Rockhold probably won the round, but no one was hurt. Romero landed some leg kicks. More of a feeling out process for both.

Romero started out hot and Luke looked in trouble, but he used great escapability to get off the back of the cage and limited the damage. Rockhold had some good boxing, including a decent jab and straight left. Romero laid back until unleashing one more time that sent Luke back against the cage. It’s probably 1-1 right now.

Romero knocked Rockhold into next year. He landed an overhand left that put Luke down and in a weird sitting position against the cage. Luke didn’t have time to put his hands up and Romero came in with a huge uppercut that was brutal.

Winner: Yoel Romero by way of 3rd round TKO