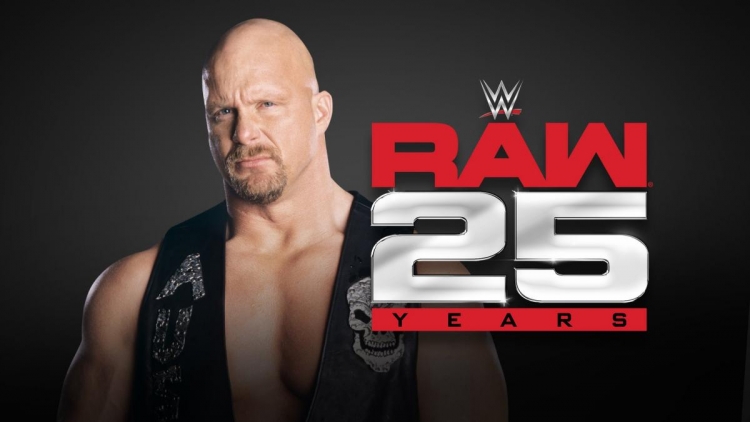 
In what looks to be a fun show with lots of appearances from big names of the past like Stone Cold Steve Austin, The Undertaker, D-X, and supposedly Chris Jericho, who may or may not be there.

Scott Hall is there as well.

At the Manhattan Center, they even have the IcoPro banner up.

We’ll be back in an hour with Raw25 live coverage.

Jim Ross and Jerry Lawler opened the show up at the Manhattan Center and then kicked it off to the Barclays crew.

Shane and Stephanie McMahon are in the ring together to start the show. They’re kicking off to some greatest moments, including the very first Raw. It’s a nice video package, but not anything you haven’t already seen ad nauseum.

They introduced Vince and he came out. The crowd started a “Thank you Vince” chant. He didn’t want to hear it. But then he said he’s not one to smell the roses, but he’ll do so tonight. And then he took a sniff and said they smell good and then said that was it.

Stephanie then gave Vince a plaque that was funded by a GoFundMe. He wasn’t impressed. He said it feels a little cheap and took a shot at Brooklyn. Stephanie said the GoFundMe didn’t get much money. Vince turned heel on the crowd and said he didn’t need to thank anyone but himself. The crowd started chanting “Asshole!” at him.

And then Stone Cold Steve Austin’s music played again. Vince tried to talk Austin out of beating him up, saying that Austin looks good, but mother nature hasn’t been kind to him. He then offered up Shane as a possible replacement for an ass-kicking. Austin raised Shane’s hand and then hit him with a stunner.

Vince pulled out two beers and they shared a beer together and then two hugs. Vince walked away and Austin’s music stopped. Vince turned around and had to eat a stunner. Shane was finally back on his feet, he and Austin shared beers and then he ate another one.

That will never get old.

Paige is ringside and Michael Cole said she wouldn’t be in the match or the Royal Rumble because of a neck issue. They brawled early before it was split up and they were redirected back to their corners. Asuka looked like she may have been dinged up a bit.

They went through two commercial breaks, probably to catch up because of the long first segment. Six out of the eight women were brawling outside and Alicia Fox missed a big kick in the corner on Sasha Banks. Banks then sunk in the Banks Statement to win the match for her team.

Mickie James was posting on the second rope and Asuka dumped her outside. Asuka also dumped Bayley and Sasha over the top rope as well.

Kurt Angle was talking to a referee about safety issues between Brock Lesnar, Braun Strowman, and Kane. Jonathan Coachman entered the room. Then Harvey Whippleman and the Brooklyn Brawler joined them. Teddy Long came in dancing. Then Brother Love, aka Bruce Prichard, entered. Where’s Conrad? It was a setup for the Boogie Man to come in eating worms. He dumped some in Coach’s hands.

JR and The King came out of commercial and Lawler immediately said that he wanted puppies. Not sure that was the best thing to say today.

There was a long video package and then the Undertaker came out with Howard Finkel’s voice introducing him. I couldn’t tell if Finkel was really there or if it was a voiceover.

The Undertaker talked about all the guys who tried him and failed. I’m not actually sure what Taker said. He either retired, or he told people to try him again. I’m confused.

this was actually so cool pic.twitter.com/iRhV4bKSkD

APA were playing cards with Heath Slater and Rhyno. Slater lost and JBL told him to hit the ATM. Then someone came in and dropped a roll of money on the table. It was The Million Dollar Man.

They then introduced the former GMs like Johnny Ace, William Regal, Eric Bischoff (who got a huge pop), and Daniel Bryan who was their special guest. Bryan came out doing the Yes chant.

Miz came out for his match with Roman. He and Bryan went face to face before Miz walked down to the ring.

The Miz Vs Roman Reigns

The referee kicked out the Miztourage because of their interfering. They hadn’t left yet and Roman went to Superman punch them. Then, the Miz hit him with the Skull Crushing Finale for a great two count. Reigns rushed him in the corner, but Miz moved out of the way and Reigns hit his head on the middle turnbuckle, which was exposed. Miz hit his finish again and got the pin.

He’s the IC champ once again.

Jeff Hardy, MVP, and the Usos joined the poker game.

Christian is in the middle of the ring for the Peep Show. Jason Jordan and Seth Rollins are his guests. Jordan tried to speak for the team and he was booed loudly at every turn. Sheamus and Cesaro came out. Seth accidentally hit Jason Jordan with a flying knee. Jordan’s feelings were hurt from the crowd and then from Seth.

Alexa Bliss and Charlotte had a tête-à-tête backstage. Ric came out and said that while Alexa is the current Raw champ, Charlotte was going to be the Smackdown champ today, tomorrow, and at WrestleMania. And the only way she won’t be champ is when she hangs up her robe. They woo’d together.

It just gets worse for the Manhattan Center. Bray Wyatt hit the Sister Abigail and won.

And Trish Stratus got the main event slot. This was really a waste of the spot. Trish and others deserved much better.

Elias walked and met Chris Jericho. Jericho made a song about him and put him on The List. Jericho was wearing his Alpha Club shirt. That’s how you put the hottest wrestler in professional wrestling in his place.

Elias did a concert and made fun of Jimmy Fallon, The Undertaker, and The Rock. Then John Cena came out. Elias told Cena that he ruined his concert. Cena told him to fight him. He said no. He walked away, but tried to sucker Cena, only to eat all of Cena’s normal moves, Five Knuckle Shuffle included. Elias gave him a low blow and the busted a guitar over him.

I wonder if that means no Cena vs Undertaker?

New Day joined the poker game. Heath finally won the big pot and it was found out that he was cheating. It was all a setup for a Heath and Rhyno vs. Apollo and Titus match. DiBiase did his famous laugh and won the pot with a royal flush. And Ron Simmons hit him with the damn.

Mark Henry was walking around in the back. He saw the Godfather with his wife Olivia. Weird segment.

Heath Slater and Rhyno Vs Apollo Crews and Titus O’Neil

The match was a double DQ only as a backdrop for the Dudley Boyz.

None of the four wanted anything to do with the Dudley Boyz, but they tossed Slater in and he got to What’s Up headbutt to the ballsack. He then took the 3D.

AJ Styles and Mean Gene Okerlund did a segment together. Styles did a bad Hulk Hogan impersonation.

It’s D-X time. They’re at the Manhattan Center. After felating themselves and then then crowd, the New Age Outlaws and X-Pac came out. X-Pac then introduced Scott Hall as Razor Ramon. And then, they cut to commercial. What?

Razor hit his too sweet line. Uh oh. It looks like the Balor Club is coming out. They all too sweeted in the middle of the ring together. The Revival came out.

The Revival Vs Luke Gallows and Karl Anderson

That was quick. They hit the Magic Killer and won the match. JR and Lawler didn’t know the finisher. Lawler asked if that was it when they hit it. Hilarious.

The Revival had to eat all their finishers and like it. Dawson ate the X-Factor, Road Dog’s punches, Gunn’s Fame Asser and then Wild ate a Sweet Chin Music, a Pedigree, and the Coup de Grâce.

Back in Brooklyn, Kurt Angle came out with just about everyone who was in a backstage segment. He doesn’t want things to get out of control. Sure, Brother Love is going to help that.

The main event segment was Braun Strowman leaving Brock Lesnar laying with a powerslam through the outside announcer’s table. Lesnar got to Kane first and Kane just had to sell for the entire time. And just like that, RAW25 was done.