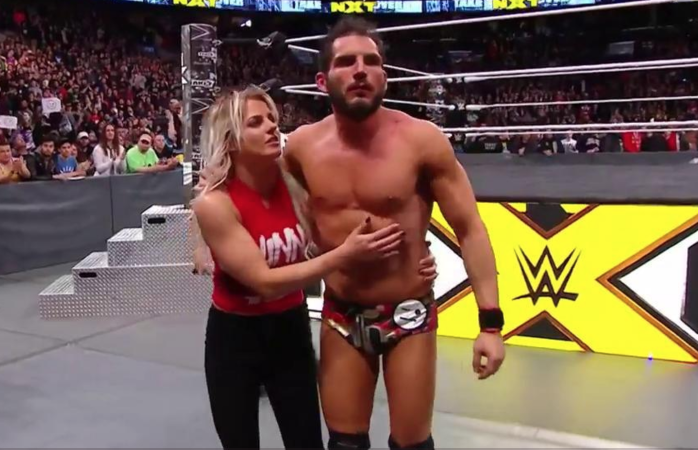 If you missed NXT TakeOver: Philadelphia, we have a recap for you.


On a night in which Triple H’s baby, the NXT brand delivered yet again on the eve of the Royal Rumble, Andrade Cien Almas defeated Johnny Gargano to retain his NXT Championship. It was a night of great variety and fantastic moments, topped off with a five star classic in the main event, which I would declare as the greatest match in NXT history.

Gargano is the best babyface, not only on the NXT brand, but in all of WWE. He has almost everything that Daniel Bryan has; the underdog charisma, the ability to take punishment and sell like nobody’s business, and the fiery comeback that the crowd gets behind him every time.

On this night, it wasn’t his time. Zelina Vega interfered a few times, which prompted Gargano’s wife, Candice LeRae to run in late in the match and send her to the back, making it a true one-on-one match.

But still, it wasn’t in the cards for Gargano. After a tremendous back and forth match in which both men delivered and took tons of punishment, Almas used his double knee strike in the corner, but did it to Gargano on the apron outside the ring and up against the ring post. He then finished him off with the Hammerlock DDT.

After the match, LeRae came back out to comfort her husband and Tommaso Ciampa attacked his former DIY tag team partner with a crutch to the middle of the back.

In the semi-main event, Aleister Black beat Adam Cole in an extreme rules match that was a little reminiscent of the Chris Jericho and Kenny Omega classic from the Tokyo Dome when it came to the pacing. There was a lot of pillage and plunder (if you will), but the moves meant something. What also helped the match was blood; Cole being cut on the head and Black being cut on the ear and possibly underneath the eye.

There were some tremendous spots. My favorite was Cole hitting Black, who was perched on the top rope, with a superkick, causing him to faith-fall backward from the top rope and onto two tables that broke underneath him. In another, Black dropped the upper back of Cole onto the backs of two steel chairs that were placed back to back. I’m sure the latter was more painful.

Kyle O’Reilly and Bobby Fish, who defended their titles against Authors of Pain in the opener, came out to stop Black from winning early on, which then saw SAnitY come out to even the odds. Killian Dain did a suicide dive and knocked both teams out like a bowling ball through ten pins.

In the end, Cole went to hit Black with a chair and Black hit the Black Mass spin kick to win the match. It was an excellent brawl.

On the undercard, the aforementioned Fish and O’Reilly retained their NXT tag straps by beating AOP. The match had an interesting psychology with the smaller guys as the heels and the huge monsters as the babyfaces. Fish and O’Reilly were like an old school tag team, keeping Akem on their side of the ring and working on his leg. He hurt it early on and they worked on it for the entire match.

At the finish, AOP went for the Super Collider and O’Reilly rolled out before being powerbomed, which caused both of AOP to hit each other. He then rolled up Akem for the pin.

The evolution of Velveteen Dream continued as he beat Kassius Ohno with his big elbow drop. Instead of jumping from the top turnbuckle, he jumped from the top of the ringpost.

Dream came in bragging that he was going to knock out the knockout artist (while wearing boxing trunks and a mouthpiece) in thirty seconds and near the start of the match, he did put Ohno down and started doing his own ten count. As a wrestling match, it was okay, but it slightly exposed Dream as a wrestler. The match wasn’t super long at around eleven minutes, but it was probably two or three minutes too long as it got sloppy at times near the end.

Dream’s charisma was off the charts, but his work is still green in comparison to everyone else on the card. Then again, this is developmental and it’s nice to see them get behind someone. The best is yet to come with him.

Ember Moon beat Shayna Baszler to keep her women’s title in a match that was built around Shayna working the armbar. It was a mix of styles with Ember’s high impact moves up against Shayna’s submission and at times, it wasn’t as realistic as it needed to be, but both women worked hard.

Shayna was working on Moon’s left arm and the opportunistic Moon found a chance to hit the Eclipse, which knocked Shayna out, but also put Moon out of commision because it further injured her left arm. The doctors came down to ringside, but Moon begged them to let her continue. By then, Baszler was up and put her in the armbar. The issue with the armbar is that if you’ve watched any MMA before, you could tell that Baszler specifically didn’t want to put it on tight. In a real MMA match, Baszler would’ve pulled back and immediately straightened the arm, but here, she left the arm bent. But Moon was still selling it like it was tight.

Moon was in the armbar for too long, not unlike Hiroshi Tanahashi last night against Minoru Suzuki. But in the case of Tanahashi, his selling was so fantastic and because of the injury angle that followed it, it more than made up for it. Baszler slipped up just a second and allowed Moon to get her on her back and covered her legs over her head to pin her surprisingly. The story could be that either Baszler is still a rookie no matter how badass she is, or Moon got a bit lucky with the victory. After the match, Baszler choked her out.

War Machine (as War Machine), Richochet (as Trevor “Richochet” Mann), and EC3 (as EC3) were shown in the crowd as newcomers to NXT.