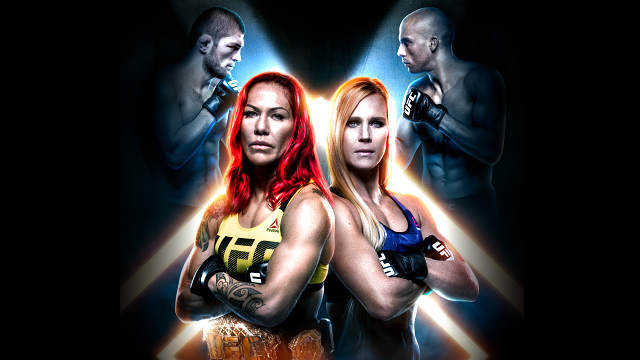 Check out our UFC UFC 219 Live Coverage – Cyborg Vs Holm.

Magny looks sharper than Condit in this first round. Condit looks like he’s trying to get whatever it is he needs back. He looks like he’s going through the motions. The round is for Magny, though Condit did better in the last 30 seconds of the round, so maybe he found his rhythm.

Magny had Condit up against the cage with a body lock. Condit tried to fight through it with punches to the side of the head. Magny then slammed him to the ground and is working within Condit’s guard. Condit got back up and landed a shot, but the same thing happened again up against the cage twice more. Magny’s up 2-0.

Condit either is frustrated or disappointed in himself. His body language is bad. Magny is pressing him and it’s not that Condit isn’t able to land. He’s just getting hit too easily and seems to be bothered that Magny is better than him tonight. Magny got another takedown late when Condit needed a finish. Condit landed a nice Superman punch, but that was about it.

This was a fun first round. Calvillo is a better athlete and it shows. Esparza is tough and is in this fight, but Calvillo is quicker to the strikes and her in and out is making Esparza react. Calvillo got a takedown and Esparza tried an arm bar from underneath.

These women aren’t messing around. They’re throwing punches right in the pocket with little head movement. Calvillo is moving the wrong way at times and is walking into blows. The second round is much better for Esparza and she’s strategically having a better round than Calvillo. I have it 1-1.

Calvillo can’t solve Esparza’s right hand for some reason. It’s accurate, but she should be able to see it coming a mile away. Esparza may win this thing going away with her striking at the end of the fight. If Carla did win the second round, which was close, she could win this fight.

The scores were 29-28 from all three judges.

Not a whole lot to the first round. The way both guys fight, this should be a barn burner, but they’re both fighting safe. Diakiese is attempting some flashy kicks, but nothing really landing. Hooker scored a takedown, but that’s about it as well.

I’m not even sure what the second round was. Hooker held him down so I guess it’s his round. This fight isn’t good.

Winner: Dan Hooker by way of 3rd round submission

Barboza unloaded with inside leg kicks right out of the gate. The pace is super fast with Nurmagomedov trying to cut off the cage and Barboza moving backward and on his horse. Finally, Nurmagomedov caught up to him, but Barboza avoided the takedown. He pressured Barboza again and jumped into him and finally got the takedown. Nurmagomedov criss-crossed his legs around Barboza’s to trap him and was unloading on him. Barboza is staying as patient as one can while taking punches right to the face. This is a 10-8 round if there ever was one.

Nurmagomedov is on him like a rabid dog. Barboza has fight in him, but he’s a beaten guy inside the cage. The round was more of the same and while not as bad, Barboza is in bad, bad shape. Nurmagomedov is as fresh as a daisy, even with all that pressure.

Barboza landed one head kick and Nurmagomedov was able to shake it off and keep moving forward. He kept up the pressure and continued to take him down and ground and pound him. Barboza finished the fight, but near the end, was wobbly. All three of these rounds should be 10-8.

Holm doesn’t look as quick at the heavier weight, but her footwork looks good. Cyborg threw a kick and Holm caught it and pushed Cyborg down. Holm’s strategy was to throw a short jab and then follow up with a left hand that she was stepping into. But, she was also running into a right hand. They tied up twice against the cage to a stalemate. Close round, but only because Cyborg stayed calm and didn’t engage all that much.

Smart round by Holm. She was much more in and out in the round. By the time Cyborg decided she wanted to throw, Holm was out. In the clinch, Holm was holding her ground. Cyborg tried to rag doll her, but couldn’t. Close round, but Holm could’ve snatched that one.

Cyborg easily won the third round. Holm tried to stay with her strategy, but Cyborg unloaded with a right hand late that gave Holm a mouse under her left eye. Holm’s confidence looks to be wavering too as Cyborg stalks her.

Give credit to Holm as she’s game, but Cyborg is punishing her slowly. Holm stayed on her game plan, but Cyborg’s shots, even jabs, are just heavier. Cyborg landed a nice head kick that rocked Holm. But Cyborg didn’t follow up. Holm’s best shot was a short right, but she didn’t really follow up and throw it again.

Holm had some nice sequences in the round, landing a surprising straight left that bounced Cyborg’s head back. But all it did was make her mad and she rushed Holm and pushed her back into the cage. This round was mostly Holm throwing combinations, maybe half landing one shot and then having to eat a Cyborg right hand. I’d score this fight 4-1 for Cyborg.

Adriano Moraes is ready for more after Demetrious Johnson victory