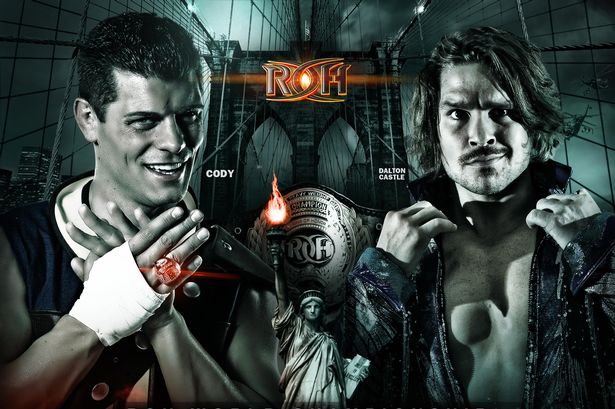 Check out our ROH Final Battle play by play.

After a full day of press with over 40 media outlets, @CodyRhodes was presented with a surprise just before his #FinalBattle main event.

We’ll be back with full play by play of the show.

Will Ospreay Vs Matt Taven

The match started quickly as Ospreay hit a big boot on Taven and then did a flip dive over the top to the Kingdom members. Ospreay hit a lot of his main stuff like the Cheeky Nandos kick and a senton over the top rope and to the outside. Taven then beat him with a headlock DDT. Didn’t come completely out of nowhere, but it was quick.

The Addiction Vs War Machine

War Machine won with the double fallout on Christopher Daniels. The match was fast-paced and a bit out of control.

Goal with this show seems to be to hit the matches hard and fast to have time for the main stuff. Working so far.

This built up well. The story was that Marty was telling Lethal that he wanted to see him be more villainous. He used a little villain to win the match.

Near the end, Scurll grabbed a couple umbrellas which played into the finish. He hit Lethal with one and then hit a piledriver for a two count. The ref went to get the umbrella out of the ring and Lethal kicked him low and then hit the Lethal Injection for the win.

This match felt very choreographed. I mostly mean that they did all their stuff well, but some of it was almost too clean.

Right when it looked like Trent Baretta and Chucky T were going to win, Chris Sabin rolled up Baretta for the pin. Chucky T hit a piledriver which was then going to lead into Baretta doing something, but Sabin won with a surprise roll-up. The Guns keep their tag straps.

I had no idea this was an elimination match. This match is the only one so far that the crowd wasn’t hot for. Taylor hit a big splash off the top rope on Martinez, but then was pinned after Martinez did a goofy springboard senton of sorts off the middle of the top rope.

We’re down to three. Silas Young hit Kenny King with a bottle of beer and pinned him. It’s down to Punishment Martinez and Silas Young.

Young beat up Martinez outside the ring and back in, hit Misery to beat Martinez and win the TV title.

This was a crazy match that was yet another ode to ECW. Bully was busted open. At one point, the Briscoes had kendo sticks and Bully and Dreamer went underneath the ring and pulled out lightsabers.

The match went a little overboard with chairs and plunder, but near the end, Bully was trying to set the table on fire, but instead, he got hit with a 3-D. The table didn’t break because Bully didn’t get up high enough, but then Mark hit an elbow off the top rope onto Bully who was sort of sitting up against a table that was half up and half on the ground. He pinned him and that might be it for Bully.

Most of the stuff was move, move, move, like you’d expect, but the finishing sequence was unique. Page had both Dragon Lee and Gordon in the Rites of Passage and he held them there and walked toward the center of the ring. Both Bucks jumped from both opposite corners of the ring to turn it into a crazy Indy Taker.

The Addiction and Scorpio Sky looked to form a team to be the next contenders. Sky turned on his buddy Gordon.

Castle surprisingly won the ROH title. The match was mostly Cody staying a step ahead of him. The Boys and Brandi both got kicked out of the match for interfering. Cody bladed so he and Bully Ray both got color less than a week after Kenny Omega got blood for his feud with Chris Jericho.

Castle won after the Bangarang and after kicking out of the Cross Rhodes. The crowd was a bit dead after all the craziness right before, but the title change didn’t really pop them. Felt a little out of nowhere even if this was the long term plan.