Welcome to our 2017 Boxing Awards!

Participating in the 2017 FGB Awards – Boxing edition are Duan, GG, and Robert Silva.

Boxer of the Year

Duan: Anthony Joshua
Joshua is the biggest star in the world of boxing right now and he changed the entire landscape of the sport in 2017. He main-evented two of the biggest attended fights in history back-to-back with one of them being a genuine heavyweight classic. AJ has more than lived up to the sky high expectations that were set when he took gold in London.

Robert: Vasyl Lomachenko
In the history of boxing, never has an elite fighter made all of his opponents quit on their stool. In all three of his fights in 2017, Vasyl Lomachenko made all three of his opponents quit in their corner. It’s one thing to make Jason Sosa and Miguel Marriaga, two solid but not great fighters quit. It’s another to have legendary Cuban boxer Guillermo Rigondeaux quit. He dominated the Cuban legend in a performance on the level of Roy Jones over James Toney and Floyd Mayweather over Diego Corrales. It was that magnificent that like of Jones and Mayweather in their primes. There is no one on the horizon in Lomachenko’s weight class that can even win a round against him, never mind a fight against him. Not only is Lomachenko my 2017 fighter of the year, he’s, in my opinion, the best fighter in the planet.

GG: Vasyl Lomachenko
The pick is between who both of my co-writers of this piece selected. There are easy arguments to be made for both guys and I thought hard about both. But I’m leaning Lomachenko. Much in the same way Floyd Mayweather made fights about him being so good, rather than necessarily who he was fighting, you watch Lomachenko to watch his mastery of the sport, as well as to see if anyone can touch him. And he even gave himself a cool-ass nickname. If he can continue to make guys quit in their corner, NoMasChenko is going to stick.

(By the way, Terence Crawford and Srisaket Sor Rungvisai are two guys who could’ve won this as well. This was a great year for this award.)

Duan: Anthony Joshua Vs Wladimir Klitschko
It’s a fight that can stand alongside the great heavyweight title bouts of yesteryear. Also, a fitting farewell for the great Ukrainian and the ushering in of a new era in heavyweight boxing.

Robert: Anthony Joshua Vs Wladimir Klitschko
In a year that saw so many incredible fights, Anthony Joshua’s win over Wladimar Klitschko was the most important because it not only ended the Klitschko era, it began a new chapter in Heavyweight boxing history in front of 90,000 fans. The fight was a series of ebbs and flows. Joshua controlled the early rounds, dropping Klitschko with a multi punch combination in the fifth round. However, Klitschko got up and staggered Joshua several times to end the round. Then, in the sixth round, Klitschko dropped Joshua with a devastating combination. Joshua was both exhausted and hurt. Joshua survived Klitschko’s onslaught and by round nine, was beginning to once again dominate the fight. In the 11th round, Joshua landed a spectacular uppercut that dropped Klitschko. After Klitschko got up, Joshua bombarded him with devastating body blows and combinations, forcing the referee to stop the fight. The most important and action packed Heavyweight title fight in almost 20 years had to be my choice for fight of the year.

GG: Anthony Joshua Vs Wladimir Klitschko
It’s pretty rare that we all agree on something as subjective as fight of the year, but in this case, we agree. There were two fights that felt huge and delivered. This was the first. The second was Triple G vs Canelo. But for whatever reason, when a fight ends in a draw, you feel deflated. So I’m going with the fight that left me elated, rather than deflated. Duan told me about Big Josh very early on so thanks to him, I’ve been able to follow him closely and what a joy it’s been to do so.

Duan: Ryan Burnett
Burnett, just 18 fights deep into his pro career this year, won his first and second world titles. He’s an exceptional talent and at only 25 years old, the biggest bouts still lie ahead for the Belfast bantam.

Robert: Anthony Joshua
With his incredible win over Wladimar Klitschko in front of 90,000 people, Anthony Joshua proved to be the most exciting heavyweight since Mike Tyson. Klitschko and his brother had dominated the division since Lennox Lewis retired in 2004. Joshua’s knockout of Klitschko put that reign to an end. It also began what could be a new exciting era in Heavyweight boxing. Joshua and fellow titleholder Joseph Parker are close to a deal to fight each other this spring. The winner will hopefully fight WBC champ Deontay Wilder. Finally, the Heavyweight division is alive and thriving. And there’s potential for Joshua to become the next, great star in the historic division. 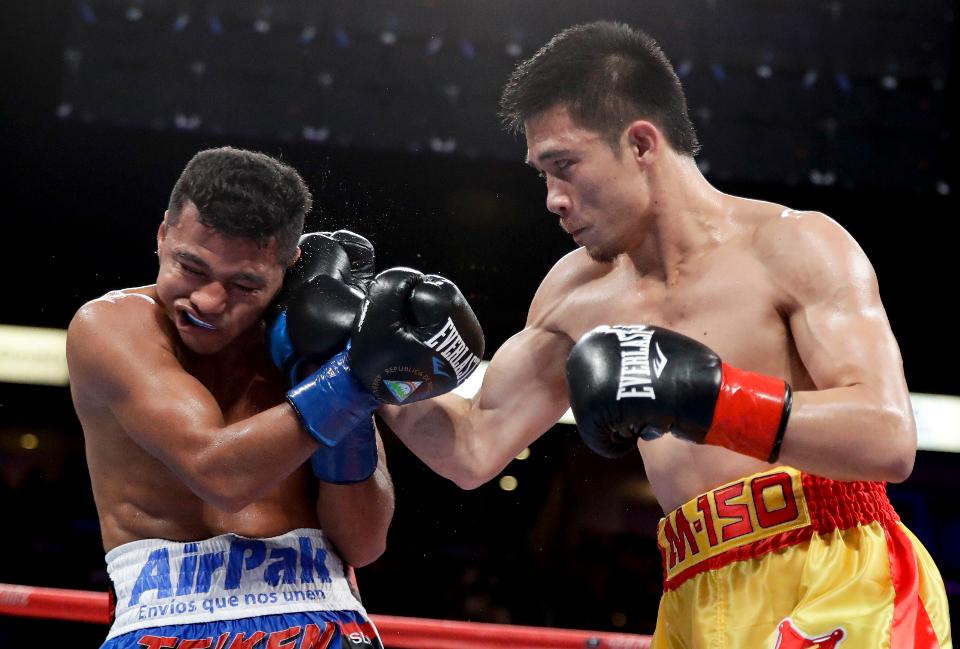 GG: Sri Sor Rungvisai
I remember being surprised when I heard that Chocolatito was defeated. And then when I saw they were fighting again, someone told me not to be surprised if it happened again. Low and behold, Rungvisai beat the guy who many thought was the best pound for pound fighter in the world, again. If that’s not the definition of breakout, I’m not sure what is.

Duan: Joshua Buatsi
Light heavyweight is loaded with talent at the moment. I see it becoming the hot division over the next few years and Buatsi will be the guy to keep an eye on. He has a ton of talent, is a natural puncher and is only scratching the surface of his potential. Obvious comparisons will be made to Anthony Joshua at this stage in his development and I think, on a smaller scale, Buatsi can be to 175 what AJ is to heavyweight.

Robert: Errol Spence
On May 27, Errol Spence went to Kell Brook’s backyard in Sheffield, England and thoroughly dominated him, including breaking one of Brook’s eye sockets to win the IBF Welterweight title. Spence didn’t fight again in 2017 because no one at the 147 pound division wanted to fight him. Next month, he will easily defeat Lamont Peterson before finally getting the super fight he deserves: either against the very reluctant Keith Thurman or the man I most want him to fight: the former Undisputed JR Welterweight Champion Terence Crawford. I predict Spence defeats both men to carry the torch left behind by Floyd Mayweather. To be the next great star in the Welterweight division, the most storied division in the history of boxing.

GG: Gary Russell Jr.
He’s probably best known for losing a fight. In 2014, he lost a majority decision to Lomachenko. But that was over three years ago, and since then he’s gone 4-0 with three KOs. He simply needs to be more active, but he’s yet another fighter in a smaller weight class who can continue making his name with some big wins in 2018.

The Virtual Fight Game: What everyone should know about eSports Boxing Club