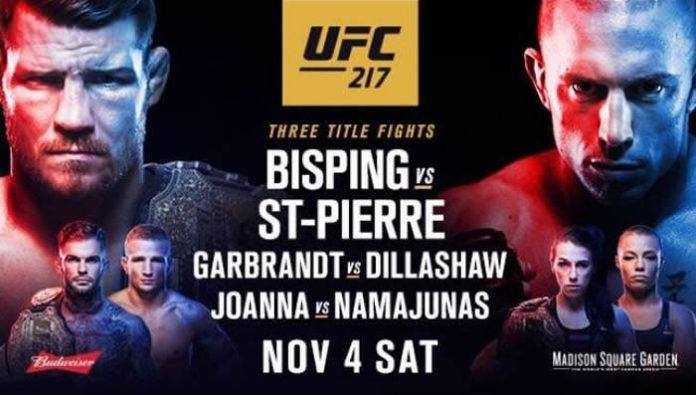 Check out our UFC 217 preview.

We haven’t previewed a lot of shows this year. UFC simply hasn’t had many big ones. But this is a big one. In fact, it’s the biggest show of the year for them.

With three title matches, their return to Madison Square Garden also features the return of their former biggest star Georges St-Pierre. GSP never lost his welterweight title and in his first fight back, he gets a title shot at middleweight against Michael Bisping.

In addition to the FGB crew (Duan, Alan, Cactus Jim and GG), included in our picks are John LaRocca, Las Vegas Review-Journal’s own and Eppy award winner Heidi Fang, our jiu-jitsu expert Alex Goff, and old friend and many times guest on the Fight Game Podcast, Jason Hagholm.

Heidi: Joanna Jędrzejczyk
The key for Rose would be to either drop Jędrzejczyk with a high kick or to push the champion’s ground game to the limit. Unfortunately, I don’t think Namajunas will be able to stand on the feet and trade with Joanna for a full 25 minutes. If it stays on the feet, that’s Jędrzejczyk’s world and where she’ll dominate. Since she’s proven to have excellent takedown defense, I give the champ the edge.

GG: Joanna Jędrzejczyk by 3rd round TKO
Who doesn’t love Rose? She looks like a grown up Eleven from Stranger Things. She fights her heart out. And we got to see a lot of her on the Ultimate Fighter. But I don’t think Rose is at Joanna’s level. Unless Rose has vastly improved between her last fight and this one, I think it’s going to be a fairly early stoppage for Joanna.

GG: T.J. Dillashaw by decision
I’m more excited for this fight than even the main event. Their Ultimate Fighter season was one of the best ones in recent memory. Garbrandt is a nutjob while Dillashaw is mostly in the right, but such an unlikable person that he turns Garbrandt from “No Love” into slightly lovable.

Maybe after it’s all over, they’ll end the blood feud, but until they do, this is one of the rare fights where you really feel like they hate each other. I think Garbrandt is going to come out fast and Dillashaw will have to weather the storm a bit. Both guys have proven that they can go the distance. I wonder if Garbrandt’s back injury will be a factor at all. It’s a toss up and I’m slightly leaning toward T.J.

Duan: Georges St-Pierre by decision
If this match was made four years ago I would have picked GSP and I’ll still pick him now. I don’t know that I’d favour him over many of the top middleweights out there either then or now, but I just like this match up for him. If he’s the fighter he was or close to it, I think he’ll be able to put Bisping down at will and we’ll see a typical St-Pierre main event. A whole lot can change in four years though and this sport historically has been unkind to those who take time away.

Alan: Georges St-Pierre by decision
I’m so excited for this. I am always a GSP backer. Have been since 2005 when I got into UFC. Not going to change now. We know Georges’ game and we know Bisping’s, and I think it’s a match-up made for Georges. I think the fight plays out exactly as it would have in 2007, 2009 or 2012.

Alex: Michael Bisping
For those who try and reconcile who sits atop the peak of all-time great UFC Champions, Georges St-Pierre may be the easiest to justify. He did lose fights, but he fought the best for a period of years. It is difficult to say he avoided anyone in his division. This was also during the era of TRT, which looking back, was a glory period for those who could incorporate chemicals into their challenging training cycle.

This Saturday night is his return, but the elements of what comprised his glory era may be in the past. He is older and less explosive, moving up in weight and facing bigger opponents. A lot of the things that made GSP great may not be there, or maybe he’ll have less of them. The thing that set him above all was his strategy. He always looked to take away what made someone strong and exploit round length and judging. If he, with possibly diminished skills, is still able to figure that out and muster everything, he may have a shot. I believe this will be the case of a bigger man beating up on a more skilled smaller man.

Jason: Georges St-Pierre
GSP walked away from the UFC in 2013 as he needed some time to get himself together mentally as the wear & tear of dominating the UFC welterweight division had taken its toll on him both physically and mentally. GSP comes back after 4 years away from the octagon refreshed and ready to become just the 4th man in UFC history to be a champion in two different weight classes.

This is a fight that is the true definition of a pick ’em fight as it can go either way. Bisping has made his case as one of the greatest middleweight fighters of all time as he’s improved his takedown defense and he’s naturally tough. But I just think GSP has too much championship experience, he’s a freak athlete and he will find a way to take Bisping down and tire him out in the championship rounds.

We’ll have play by play of the main card tomorrow as it happens.