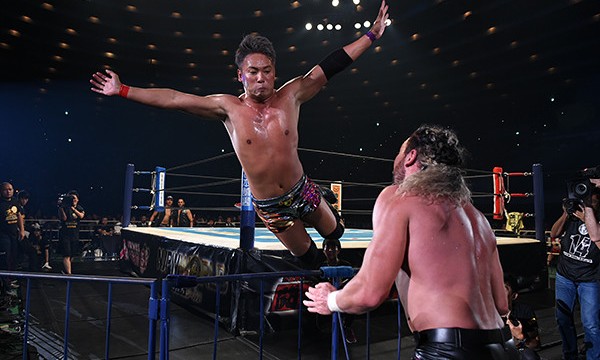 John LaRocca is back with his top 5 matches of the third quarter 2017.

Welcome to the third edition of my top 5 matches of 2017. This list is my favorite matches that took place from July to September of this year. What makes pro wrestling so great is that there is a style of wrestling for everyone to enjoy. Wrestling fans are so passionate about this issue, and I always love hearing from fans on why they liked or disliked a match. Drop me a comment if you have your own list.

If you haven’t checked out my top matches for Q1 and Q2, check those out as well.

Like Wrestle-1, NOAH is struggling. NOAH bringing in Brian Cage to build him up for a GHC Heavyweight title shot a breath of fresh air to the promotion. Brian Cage is a perfect fit in Japan. If I was booking NOAH, I would bring him back as soon as possible. Cage is a unique athlete in that he is big and muscular, but also can high fly like a junior heavyweight. Nakajima is one of the best in the world today, but for some reason I saw a lot of fans calling for NOAH to take the title from him. I don’t understand why.

In this match, Nakajima proved he is a great world champion. Nakajima really made Cage’s offense stand out and mean something because he took time to sell the moves. Unlike a typical independent pro wrestling match the structure is big move after another with no time given to sell them, both men sold here. I absolutely loved this match and it’s one I think every pro wrestling fan should watch.

The 2017 G1 Climax tournament was one of the greatest tournaments that I had ever seen. There were so many great matches that lead into this final match. It was a big-time pressure situation for both Naito and Omega, but they delivered. It was what a finals of a big tournament should be – pulling out all the stops to win the match. There were some dangerous risks, but surprisingly both men came out with no major injuries.

I really enjoyed Okada versus Omega 3. They told a great story and played off their two previous classic matches. Okada had an injured neck and Omega’s offense was focused on it. I like it when Omega is serious and focused. I loved his determination to win in this match. Omega has his detractors, but nobody can say his work was not top level here. It all played out with Omega finally pinning Okada with his One Winged Angel.

WRESTLE-1 has been struggling as they grow their crop of young athletes. It is like watching a baseball team having to play their rookies before they are ready. Rebuilds can be tough, but in the end WRESTLE-1 will have roster of great young talent.

Two of their top young guns are Shotaro Ashino and Jiro Kuroshio. Ashino is the champ. He is a suplex machine and a master of the ankle lock. As a former amateur wrestler, you can tell Ashino studies a lot of old Kurt Angle matches including busting out a beautiful moonsault just like Kurt Angle in his prime. Kuroshio is probably one of the most charismatic guys I have seen come around in a long time. He is only 24 years old and he is a great athlete. He wrestles in a jacket because his character is that he is metrosexual. At first I didn’t like it, but then his work is so fantastic that it doesn’t matter.

These two put on a great classic title match, well beyond their experience. It felt epic and important. I thought it would good, but they exceeded all expectations and that is why it’s in the number two spot in the Top 5. Ashino vs Kuroshio should be WRESTLE-1’s answer to Ric Flair vs Dusty Rhodes – the great world champion versus the charismatic people’s champion. I am looking forward to many matches between these two in the near future.

This match was so good, I wrote about it a month and a half ago on this very website.

This was a rematch from their first encounter in April during the Champion Carnival tournament. That match was so good, it made my Top 5 for Q2. This match was even better. Playing off the Champion Carnival match, Ishikawa and Suwama put on a rollercoaster ride with a lot of twists and turns. Suwama was set up for Ishikawa to get a big win leading up the “big match” versus Kento Miyahara in August. This match had the crowd so wrapped in their story, they felt the title would change hands on this night. The building was on fire. This match is worth watching over and over again.

Quarter 3 was toughest of the quarters so far. I had over twenty matches on my list as contenders for the Top 5. It took me a very long time to decide the Top 5 and the order. At the end of the day, it came down to the matches that stuck with me the most after viewing them the first time.