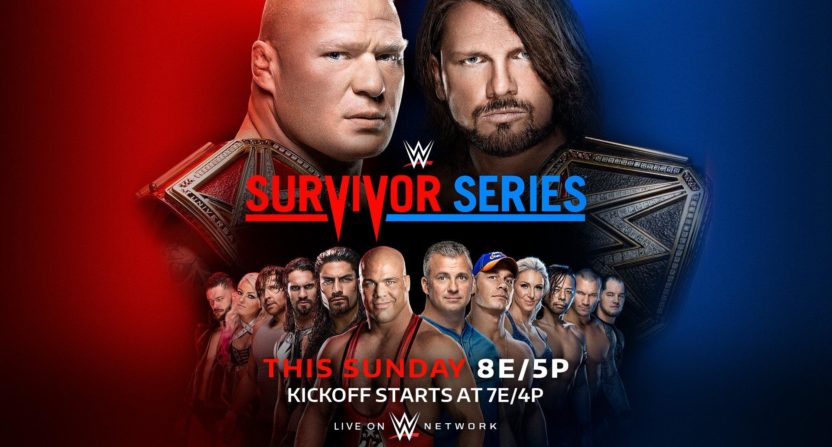 It’s Team Raw vs Team Smackdown in the main event of Survivor Series. Follow along with us.


They’ll have their work cut out for them to top last night’s NXT WarGames show, but they do have an excellent card on paper.

I think a lot depends on how well they use the time that they have. Will AJ Styles vs Brock Lesnar be 8 minutes, or will they get 15? How many stunts and angles come out of the main event? Can the Miz and Baron Corbin be under 30 seconds?

We’ll see what happens, but the expectation is that tonight’s show will be good.

On the preshow, Matt Hardy lost to Elias the drifter. Ezno beat Kalisto to keep his title. Kevin Owens and Sami Zayn (why were they even on the preshow?) beat Breezango.

New Day Vs The Shield

The match was good and the crowd generally liked it, but I felt throughout that it should’ve been hotter. The Shield won the match with a triple powerbomb from the middle rope onto Kofi.

The New Day did an interview before the match teasing Shield dissension.

Big E and Roman did some fun power spots early. The New Day teased a double midnight hour with Big E having Rollins and Ambrose on his shoulders, but Reigns broke it up with a spear.

Surprisingly Becky Lynch was the first person eliminated. She was trying to put Alicia Fox in the armbar, but Fox had tagged in Bayley and Bayley school-boyed her for the pin. It’s 5-4 Raw.

Tamina splashed Bayley off the top rope to even the odds. Nia and Tamina went at it and it was a bit comical with both trying to headbutt each other at the same time and then falling back. Nia was outside and Naomi dove out onto her. She had nailed Naomi for no reason earlier. Then Tamina hit a splash on her on the outside and Nia was counted out. It’s 4-3 Smackdown.

Naomi pinned Alicia in a messy situation where it looked like Alicia was supposed to kick out. It’s 4-2 Smackdown. Naomi then submitted to the Banks’ Statement. It’s 3-2 Smackdown.

Asuka kicked Carmella’s head off and pinned her. It’s now even again.

Natalya made Banks tap out to the Sharpshooter and now it’s Natalya and Tamina vs Asuka.

Tamina missed a splash off the top onto Asuka and Asuka put her in an armbar. It’s now Asuka vs. Natalya. Natalya went for a Sharpshooter and Asuka turned it into a kneebar. She then did the chicken wing sitout to set-up the rear naked choke for the win.

Baron Corbin Vs The Miz

Smackdown is finally on the board. Miz and the Axe Man worked on Corbin’s leg. Miz put him in the figure four. But Corbin fought back from it and hit his End of Days to win the match. It was what you would’ve expected.

Sheamus and Cesaro Vs The Usos

This was a good match. Because you had a clear heel and clear babyface team, the crowd was into it and the guys were able to work a normal pace. Lots of high spots with the Usos having to sell along the way until the end when they hit a bunch of superkicks and Jey hit a splash on Cesaro for the pin.

This was a long and slow match, with Charlotte doing a lot of selling. Alexa was great in her role as the little bully and she was strong throughout most of the match. She targeted the left side of Charlotte’s ribs. Near the end of the match, Alexa set up her Twisted Bliss, but Charlotte got her knees up. Charlotte then hit the big boot and the Figure Eight to win the match.

Brock Lesnar threw AJ Styles around like a sack of potatoes. Tons of suplexes and clotheslines. AJ was bouncing all over the place. Finally, Styles got a bit of room as Lesnar missed a knee lift in the corner. He started to kick his legs and take him off his feet. He hit a Pele kick while Brock was down on his knees. He went for the Phenomenal Forearm, but Brock turned it into a German Suplex.

Brock was dumped over the top. AJ slingshot himself to the outside and hit the Phenomenal Forearm on Lesnar. Then he did it again using the ring steps as his launching pad. AJ hit a springboard 450 from the outside and Brock kicked out at two.

AJ put on the Calf Crusher and Brock arm triangled him and slammed his head against the canvas a few times to get out. AJ hit another Phenomenal Forearm, but Brock kicked out. He took off his elbow pad and went for it again, but Brock caught him in a F5 and pinned him.

Nakamura ran wild on Triple H, Angle, Joe until Strowman was tagged in and he hit the powerslam to take him out. It’s 5-4 Raw.

Roode came in and he was quickly eliminated as well with the same finish. It’s 5-3 Raw.

Joe tagged in and he and Strowman started fighting, which led to Triple H and Angle fighting. Orton ran wild and Cena came in the ring to dap him up. But it led to them double teaming Strowman and taking him out of the ring. Strowman cleared off the announcer’s table, but Cena and Orton tried to double suplex him instead. They couldn’t get him but Nakamura and Roode helped them get him up and through the table.

Angle and Cena went back and forth for a few minutes and surprisingly the crowd didn’t really care all that much. Balor snuck in and hit the Coup De Grâce on Cena and then Angle pinned him.

Orton pinned Balor who missed the Coup De Grâce and then ate an RKO. It’s now 3-2 in favor of Raw.

Owens and Zayn attacked McMahon who was already knocked out from eating a Balor dropkick outside. But he grabbed a chair and ran them away. Orton also gave Owens a RKO, officially winning their Twitter war.

Strowman hit Orton with a powerslam and it’s now 3-1 Raw. Shane McMahon is the last man for Smackdown.

It was Kurt vs Shane and Kurt had him in the ankle lock, but Triple H hit Angle with the Pedigree and rolled Shane over Kurt and it’s now 2-1 Smackdown.

Triple H then Pedigreed Shane and pinned him to win the match. Strowman just stared at him.

Strowman powerslammed him twice. The crowd didn’t really react much.