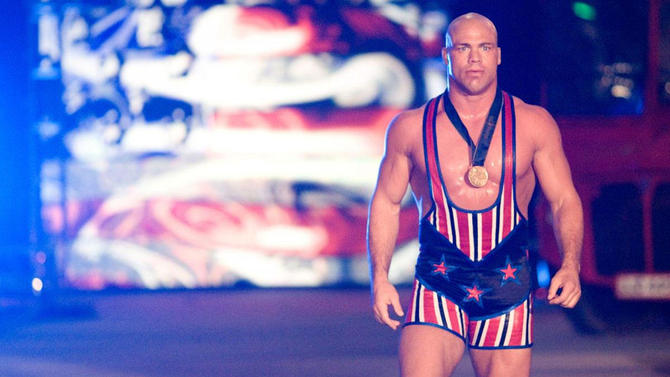 Thank to illnesses, TLC is now the PPV where Kurt Angle returns to a WWE ring.


The shape of this PPV, which was supposed to be the return of the Shield, has changed in the last few days. A viral infection has knocked Bray Wyatt and Roman Reigns off the show.

Wyatt was scheduled to face Finn Balor. AJ Styles, coming over from Smackdown, replaces Wyatt which improves that match 10-fold. And Kurt Angle replaces Reigns in the match with the Shield. Not only is it a big surprise, but it’s also a hot shot like we haven’t seen in awhile.

I think most figured that Kurt Angle would eventually wrestle again, and it’s a nice and easy build to what should’ve been a big match. But instead, they blow the opportunity by having him wrestle on what was kind of a throwaway PPV, outside of the Shield reunion.

This does make the show much more intriguing, but I’m not sure that it’s a great business decision.

We’ll have live coverage of the show show right as it starts.

It only took a minute, but Asuka might already be the best wrestler on Raw. She looks a little heavier than she did in NXT, but worked the same speed as she usually does. This was more competitive than I’d have thought as Emma had her spots of working on top, with Asuka making the comeback. They went outside and Emma tossed Asuka from the apron to the floor like a press slam. Asuka finally set up the Asuka lock and Emma tapped out.

This was a fun and wacky match with a lot of dives early on. Alexander did the swan flip dive to the floor and neither of the heels touched him so he basically dove out to the floor and just landed on his feet.

Kendrick had the Captain’s Hook choke on Swann and Alexander broke it off with a move off the top. He then hit the Lumbar Check to get the pin.

This match had a nice story. Bliss worked on James’ left arm and shoulder for most of the match and Mickie did a good job selling. Whenever James would get a comeback, Bliss would do something that caused James to sell her shoulder again.

At the end, Bliss pulled her into shoulder first into the second turnbuckle, hit a DDT, and won the match. Bliss has improved so much.

"I know you guys wanted to do things 2-on-5, but I couldn't let you do that!" – @RealKurtAngle to @WWERollins & @TheDeanAmbrose #WWETLC pic.twitter.com/rP2jVckO7S

Enzo won his belt back like everyone thought he would. He hit the middle rope DDT for a near fall. He then grabbed the apron skirt and the referee had to put it back. While he was doing that, Enzo thumbed Kalisto in the eye and then hit the Eat Defeat for the win.

Kalisto’s title run was one to remember.

This was a very good professional wrestling match. It wasn’t match of the year or anything, even if you just counted WWE, but both guys were on their games. It was pretty much a 50/50 match being that it was baby vs. baby.

Balor got the duke in the end, hitting the Coup de Grâce. After the match, both guys gave the “two sweet” sign and touched fingers. Michael Cole said it was a sign of respect. Sheesh.

AJ was excellent in this match. He showed nice mat work when putting on the Calf Crusher and transitioning Balor’s attempts to get out of it. And he bumped like crazy for Balor’s finishing sequence. Balor looked better than he’s looked in awhile, which makes sense considering who he was working with.

The Drifter Vs Jason Jordan

This did nothing for either guys. Elias had two segments earlier in the show where he was going to perform with his guitar and both times, Jordan interrupted him by throwing produce at him.

Jordan won the match with an inside cradle after Elias suplexed him into the ring. Right before, Elias tossed him legs first into the bottom turnbuckle and he acted like he tore his knee. It wasn’t enough for him to hold the cradle with his legs. It sucked.

The Miz, Cesaro & Sheamus, Kane, and Braun Strowman Vs The Shield (with Kurt Angle)

This is pillage and plunder.

The good guys made it even early on by using nothing but chairs to knock down the bad guys. Ambrose and Rollins grabbed ladders and jumped from the top onto Kane and Strowman who were on each announcer table. But in doing so, they took themselves out of the match too and that left Angle with the other three guys.

The bad guys took over on Angle, but he was finally able to make a comeback, hitting German suplexes on the Miz and then Sheamus and Cesaro. They put Angle through the table and he had to be taken through to the back.

That left the bad guys with a 5 on 2 advantage and they gave Rollins and Ambrose quite a beating. Kane accidentally hit Strowman with a chair. Miz called for a garbage truck to come from the back and they tried putting both guys in the garbage truck. Rollins and Ambrose fought back and out of the truck and then did dives onto everyone but the Miz.

Ambrose and Rollins chased Miz. Then they were going to suplex Kane through a table on the stage. Strowman broke it up, but then Kane turned on Strowman and threw him down to the floor. Strowman tried to get up, but Kane ripped a series of chairs that were part of the stage props and they all fell on Strowman who was buried in them.

Kane then chokeslammed both Ambrose and Rollins through tables. Ambrose’s bump was nasty. Strowman came back from the dead and turned on his team. They quadruple teamed Strowman and threw him in the garbage truck. It was 4 on 2 until Kurt’s music played and he came back limping. He hit the Angle Slam on both Sheamus and Cesaro. Kane was about to Tombstone him, but Ambrose and Rollins saved him with chair shots on Kane. They then speared him through the barricade. Miz snuck up behind Angle and hit the Skull Crushing Finale. Angle kicked out at 2.9. He then put Miz in the Angle Lock. Miz got out. But then he was triple teamed. They each hit their finisher on him and then he was on the receiving end of the Shield power bomb.