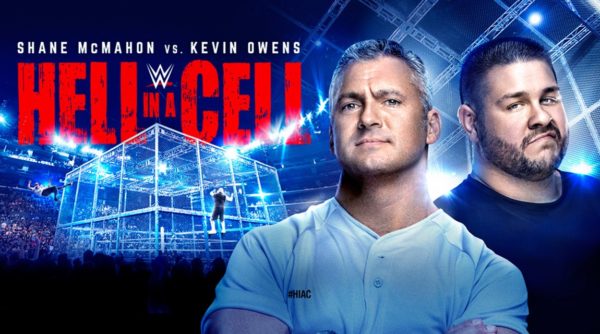 Check out our Hell In A Cell live coverage.


I’ve been checking out with my wrestling friends and not too many people are feeling this show. Sometimes that means that expectations are low and it can overdeliver. That’s my hope with this one. The Smackdown brand is cold as ice and it’s to no fault of the wrestlers; this one is all on the booking. Smackdown has once again become the red-headed stepchild with all of the top draws on Raw.

New Day Vs The Usos

One of the two Hell In A Cell matches opens up the show. It’s Big E and Xavier inside the cage. Kofi Kingston is sitting this one out, but is outside of the cage.

The plunder came into play right away. But the New Day didn’t have normal plunder. There were two trombones, a cowbell, and one symbol. The Usos had more normal plunder like chairs and kendo sticks.

There were some very dangerous spots. Big E did the spear through the middle and top rope on one of the Usos into the cage and looked to bang his head on the cage. Then, Big E gave one of them a Rock Bottom from the apron to the floor and Woods was supposed to catch him on his knees like a back cracker. Woods got there a bit late.

Jay got tied up in kendo sticks in the corner of the cage and the New Day went after Jimmy. The Usos got handcuffs and put them on Woods. They hung him from one of the corners and went to town on him with kendo sticks to the midsection. It was almost like when Shane McMahon’s balls were electrocuted.

The Usos finally won the match by putting a chair on Woods and hitting him with double Super Fly splashes. The match was really good and surprisingly violent; as violent as you can get without blood.

The Usos are the new champs.

Orton and Rusev were put in a position to have to follow that great opener and they did exactly what they needed to do. They told a strong story and had a rock solid match.

Rusev was working the entire match to get the Accolade but Orton was too slippery. Near the end, Orton was about to hit the RKO, but Rusev nearly had him in the Accolade, but then Orton got out and hit the RKO for the finish.

Corbin must be studying Kane tapes. A lot of his mannerisms are like Kane, including throwing punches and dumping himself over the top rope. If he had any believability at all, I think it’d be good for his character, but since he doesn’t, he’s just slow and boring.

Dillinger should’ve made this match better, and he did, but only slightly better.

They had some nice action near the end with all three in the ring, including a false finish where it made you think that Dillinger was winning.

Corbin stole AJ’s pin after AJ hit Dillinger with the Phenomenal Forearm. He was supposed to big boot AJ over the top rope, but he kicked him too low as AJ didn’t clear the ring, so Corbin booted the hell out of him to get him out of the ring and steal the pin.

Natalya got herself disqualified to keep her title.

Natalya was working on Charlotte’s leg throughout the match, which hindered Charlotte’s ability to hit her moonsault. She finally attempted it to the outside. That’s when Natalya DQ’d herself by hitting Charlotte with a steel chair to her injured leg.

It was known that Nakamura wasn’t winning the title. WWE has a show in India coming up. But, the booking was horrendous here.

Yes, everyone is sick of the Singh brothers interfering, but at least theoretically, they’re there to build heat. So, the referee sends them to the back and they don’t actually interfere in the finish. They helped stall the referee for a second and a half after Nakamura hit the Kinsasha, but it was also dumb because Jinder was near the rope. Stalling or no stalling, he just had to stretch out his arm to get the rope. It’s not like he kicked out.

The finish was that Jinder went for his Cobra Clutch slam, Nakamura maneuvered out of it, went for another Kinsasha but instead missed and hit his knee on the middle turnbuckle. Then, Jinder pinned him with the Cobra Clutch slam. Nice job with Nakamura, Vince.

This match really never had a chance. The crowd wasn’t into it and it’s in the death spot.

Roode won after they traded rolling each other up and pulling the trunks. Ziggler then hit the Zig Zag and left him laying.

Before Owens could get inside the cage, Shane attacked him. Shane was blowing himself up with bad punches and kicks. He even hit a capoeira kick.

Inside the cage, it was time for Shane to sell and sell and sell. He’d get a hope spot and throw more bad punches, but then miss a moonsault (that looked better off the diving board I’m sure) and it was back to sell.

Owens went for the Pop-up Powerbomb, but Shane caught his arm and it looked like he was going for the armbar, but he transitioned to the triangle. Outside the ring, he tried to put on the triangle again, but Owens powerbombed him on the steps. That looked brutal.

Owens set up Shane in the corner of the cage perched up against a table and went to do his running cannonball. Shane moved and Owens went right through the table. It looked fantastic. Shane then grabbed pieces of the broken table and hit Owens with it. He threw a trash can into the ring and then hit the coast to coast dropkick. Both guys look like they took some damage with that one.

Shane used the bolt cutters to open up the cage. They brawled outside and Owens put Shane on the announcer’s table. He teased jumping off the barricade and onto Shane, but then instead went to the top of the cell. But he couldn’t jump. Shane climbed to the top and they brawled on the top like Mick Foley and Triple H.

They did some crazy stuff up top, including a Popup Powerbomb. Owens teased throwing Shane off the cage, but Shane stopped him. They both climbed down, but midway down, Shane clunked Owens against the cage and he fell off and went through the table. Shane then dragged Owens and placed him on the other announcer’s table. He then climbed back on top of the cage and jumped. Owens moved and Shane bounced hard. Sami Zayn is the one who pulled Owens off. Zayn then put Owens over Shane and Owens got the win.