For our second #TBT post of the day, we’re going to back to 1988 – Sugar Ray beats the Golden Boy.

After Ray beat Marvin Hagler, he retired. No, really. That’s so unlike Ray right?

There was no Hagler rematch on the horizon, which is what I think he was hoping for. Instead, he turned to a blond Canadian light-heavyweight who wasn’t all that well known named Donny Lalonde. While most hardcore fight fans saw Leonard’s choosing of someone out of his league as his next opponent, Lalonde was much bigger, which presented a challenge. Leonard was small at 160, and now had to move up another weight class. Even though Lalonde had to come down from 175 to 168, which made the agreement odd in of itself, he was still going to be a big 168 while Leonard wouldn’t even reach that weight, weighing in at only 165. 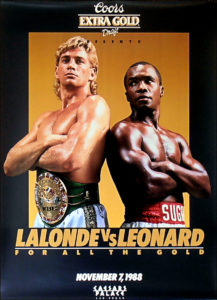 If you look at the promotion of the fight, it was simply that Leonard was biting off more than he could chew. He topped the great Marvin Hagler. He could now topple someone even bigger. Just look at the height difference in the fight poster.

The super middleweight title and light-heavyweight title were on the line in this one. Winning it would give Ray five titles in five weight classes, tying Thomas Hearns who would go on and do that just a few days prior.

Early on, it did look like Ray had bitten off a little too much. The word on Lalonde was that he was a one-armed fighter who couldn’t even really jab. He had shoulder issues on his left side and had surgery. But Lalonde’s left wasn’t terrible in this fight and his size and distance was giving Ray fits, including knocking him down in the fourth.

But then, it was almost like Ray told himself it was time to turn back the clock and show his greatness. He then started to beat the bumps off Lalonde, though, still had to defend himself against the right hand. Eventually, he got to Lalonde in the 9th, putting him away, but not before taking a big shot himself.

There were a couple of interesting tidbits with this one. Leonard fought without Angelo Dundee in his corner. After the Hagler fight, Dundee thought he should get more than what he was paid for the fight because Leonard’s gross was so big. Janks Morton led the corner.

Also, Vince McMahon’s Titan Sports (now just WWE) out-bit everyone else for the closed circuit and PPV rights. Bob Arum originally wanted to work with Leonard and his advisor Mike Trainer to make one bigger show. He had a Thomas Hearns fight scheduled, but would push that one back a month if Leonard wanted to work with him and he’d include his undercard, featuring Michael Nunn, on Leonard’s fight. Leonard balked, and thus, just three days before this Monday night PPV, Thomas Hearns fought James Kinchen, also on PPV.

Titan Sports at the time claimed a 6.8 buy rate for the fight, which would’ve been somewhere around 650,000 buys for the fight. However, in talking to Dave Meltzer, he said he’d heard much less, and recently on his radio show said he heard that it was actually about half of what Titan claimed. If so, with having paid guarantees at around 10 million, they definitely lost money on the fight.