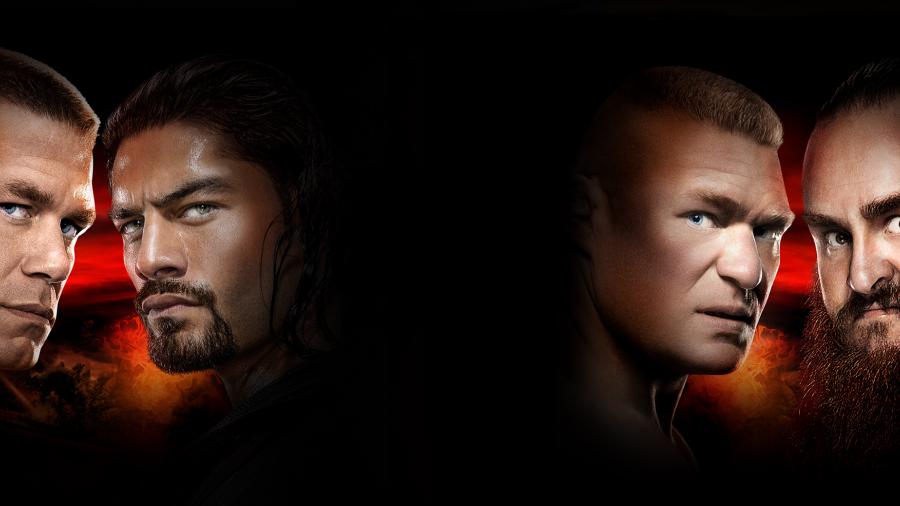 Check out our No Mercy live coverage featuring Brock Lesnar vs Braun Strowman and John Cena vs Roman Reigns.

Tonight’s No Mercy card is WWE’s best card since WrestleMania 33, and that includes last month’s SummerSlam. I’m not exactly sure why they decided to stack this card up with two matches that you could rightly save for WrestleMania, but I’m not going to complain.

Here are your matches for tonight:

We’ll be back with play by play for the show.

The Miz Vs Jason Jordan

The match was pretty fun and Jordan was on fire with his suplexes and his energy. His comeback was just like his hot tag when he was with Chad Gable.

Of course, the Miztourage interfered and Miz hit the Skull Crushing Finale for the victory. Crowd isn’t into Jordan, which made them super into Miz.

Wyatt jumped Balor from behind. I just hope he doesn’t mess up Balor’s sweet gray leather jacket. He slammed him on the announcer’s table. Balor was holding his ribs and even started walking away from the ring like he wasn’t going to have the match.

Of course, he walked back after Bray started talking smack.

Lots of selling early for Finn. Slower match with Bray on offense, but it was good work. Finn made his comeback and hit a version of his Coup de grâce finisher to Bray’s back. Bray kicked out and took his head off with a clothesline. Then he did two suplex throws and went to the top. Balor caught him up top. Then Balor hit two corner dropkicks to set up the real Coup de grâce finisher to win the match.

This was an excellent match. It was an old school tag team match with great psychology from two awesome teams.

They fooled me on the finish. Cesaro and Sheamus were cleaning up on Rollins and Ambrose and Sheamus had Ambrose up for the White Noise. Cesaro was on the top rope and Rollins tried to jump to the top rope and throw him off, but Cesaro caught him. Sheamus dumped Ambrose in the White Noise and then Cesaro powerbombed Seth on top. I thought it was over, but Mean Dean kicked out.

Earlier in the match, Cesaro was slingshot into the corner and hit his mouth on the ring post and it looked like he lost a couple teeth.

Ambrose and Rollins won after Rollins hit the jumping knee on Sheamus and then Ambrose hit his DDT.

The match was built around Nia Jax as the powerhouse and the other four girls were working together at points to try and take her out.

At one point, she was trying to suplex Emma outside the ring, but Emma blocked it. She slid under her to powerbomb her on the floor. Bayley started to help, but they couldn’t pull her. Then, Sasha and Alexa kicked her and Nia was finally powerbombed to the floor. It looked brutal as she landed mostly on her right shoulder.

There were some teases later in the match with everyone breaking up each other’s pins. Nia came back in the ring to clean house, but took a ring post and was out of the ring. Then Bliss DDT’d Bayley to win the match.

It took one shoulder tackle by Reigns for the fans to start the, “You both suck” chant. Cena walked to toward the back as if to show up the crowd and Reigns chased him and brought him back.

The match isn’t as good as the tag team match from a work perspective, but it’s the most heated match so far. Cena caught Reigns and herc’d him up into the Attitude Adjustment after Reigns was on the offensive for most of the match. He put him in the terrible STFU.

Reigns hit the Superman punch, but missed the spear, which set Cena up for the Attitude Adjustment from the top rope. Reigns kicked out. They went outside and Cena tried to hit the AA onto the announcer’s table. Reigns speared him through it instead. He went for another spear in the ring, but Cena got him in the AA again. Then he rolled him through for another. Reigns kicked out.

Reigns hit another Superman punch, then hit the ropes and hit a spear again for the pin.

This was long. Neville toyed with him and rag-dolled him for the entire match until the end. Enzo hit the move in which he jumps from the top rope onto Neville standing and then hits a DDT. He got a two count out of it. Neville tossed him into the box near the ring announcer. Then Enzo grabbed his belt. Neville chased him and Enzo took the belt into the ring. The referee made him give him the belt, then Enzo kicked him low and he pinned Neville.

Match started hot, but was underwhelming. Strowman was throwing Lesnar around, including hitting his powerslam finish early for a two count.

Lesnar got back in the match after a long kimura spot. Strowman went to the corner, but it didn’t get broken up. Strowman hit his powerslam again, but was too hurt to cover. Lesnar hit his suplexes and then eventually hit the F5 to win.