Robert Silva is back with his second greatest welterweight of all-time: Henry Armstrong.


During Manny Pacquiao’s incredible run in which he won world championships from Flyweight to Welterweight, many fans and members of the media were incredulous as how such a small man in stature could dominate men much bigger than him. Henry Armstrong was the fist legendary fighter to accomplish such feats.

Armstrong had a style that was nonstop aggression. At only 5’5″ tall, he came at you like the Tasmanian Devil. He would jump on you and wear you down with incredible, rapid fire combinations to the body and head. He had incredible stamina for a man of his style. His style would later be emulated by legendary fighters Aaron Pryor and the aforementioned Pacquiao. In his title winning effort against Ross, Armstrong battered at Ross for the entire 15 rounds. Ross had no answer for Armstrong, instead choosing to go into survival mode just to go the distance. Ross suffered such a severe beating that he was forced to retire at the young age of 28.

On March 1, 1949, in one of the worst decisions in boxing history, Armstrong completely dominated Middleweight champion Ceferino Garcia over 10 rounds for Garcia’s title. A win would have made Armstrong the first man in boxing history to win four titles in four weight classes. Inexplicably, the judges scored the fight a draw. This is the only complete fight I have of Armstrong in my collection as there is barely any known footage of his career. I cannot fathom how anyone could score this fight either a draw or victory for Garcia. Garcia spent the entire fight trying to out-punch Armstrong as the two engaged in a phone booth type toe to toe affair. It was a foolhardy game plan, as Armstrong’s punch output was far superior throughout the entire 10 rounds. Armstrong never received another shot at the Middleweight crown, so he went back to dominating the 147-pound division. 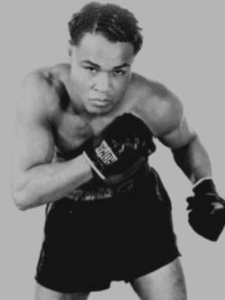 In two and a half years, Armstrong defended the 147-pound title a record 19 times. It’s a record that he still holds today. It was an incredible feat as back then, fighters would fight monthly and sometimes twice a month. With his aggressive, fast paced style, it made this record that more amazing. In the history of the Welterweight division, a fighter Armstrong’s height had to be something special.

On October 4, 1940, Armstrong would finally lose the title to the cunning and dirty Fritzie Zivic in a 15-round foul fest. He would be stopped in 12 rounds by Zivic in the rematch. Despite no longer being champion, Armstrong continued to have incredible success, including beating Zivic in a rematch. However, the end of his contending days as a Welterweight was put to an end on August 27, 1943 when he lost a 10-round decision to a then 23 year old Sugar Ray Robinson. The torch had been passed from the last great Welterweight to the man who one day would become the greatest Welterweight of all time. He will be the subject of my next and final installment of this series.