Robert Silva finishes off his greatest welterweights in boxing list with number one – Sugar Ray Robinson.

If there ever was a perfect fighter, Sugar Ray Robinson (born Walker Smith) was that fighter. Robinson moved like a gazelle in the ring. His footwork had never been seen before in the squared circle. He was the dance-master, and as a Welterweight, he was unparalleled in his brilliance. His footwork, combined with his incredible hand speed and power, made him unequivocally the greatest Welterweight in boxing history.

After an amazing amateur career which saw him go undefeated in 85 fights and garner two New York Golden Gloves championships, Robinson turned pro in 1940 at the tender age of 19. The 1940 Summer Olympics had been postponed due to World War II, so Robinson had no choice but to turn pro. In his first three years as a pro, Robinson engaged in 46 fights, winning 45 with 30 by knockout. His lone defeat came at the hands of Jake LaMotta in a return bout after Robinson had defeated him in their first fight. In those three years, Robinson defeated such fighters as LaMotta, Fritzie Zivic, Marty Servo and Sammy Angott two times each. The current champion of the Welterweight division, Freddie Cochrane, was serving a tour of duty with the United States Army during World War II. Despite being unable to receive a shot at the Welterweight title, Robinson instead cleaned out the division.

Robinson’s biggest win during his first three years in his pro career came on August 27, 1943 against the legendary former three-division champion Henry Armstrong, the subject of my last article. Robinson completely stifled Armstrong, using his incredible footwork to keep the always aggressive Armstrong from cornering him. Robinson easily won a 10-round decision in the battle between the former great and future great Welterweights. Unfortunately, there is no available footage of this classic encounter. Also, Robinson would be forced to suspend his boxing career as he was drafted to serve during World War II. Unfortunately, Robinson would be discharged a year later after he mysteriously disappeared from his barracks. He claimed to have amnesia and was subsequently given a discharge due to his mental health. He resumed his boxing career in October of 1944 and his Army mishap had no ill effect on his physical ability inside the ring. He was 25 and easily the best fighter on the planet. He kept busy, defeating all the top 147-pound fighters in the world, including LaMotta two more times and Angott, until the war ended and he would finally face Cochrane.

When the war ended in 1945, Cochrane refused to give Robinson a shot at his title. He instead decided to fight Servo, a man who twice had been dominated and defeated by Robinson. Servo destroyed Cochrane in four rounds. Then, Servo ducked Robinson, deciding to move up to Middleweight and fight Rocky Graziano. Graziano totally destroyed Servo, forcing Servo to retire prematurely. Robinson would finally get his shot at the Welterweight title, as on December 20, 1946 in Madison Square Garden, he easily outpointed Tommy Bell to win the vacant Welterweight Championship of the World. Robinson had amassed an incredible record of 74-1-1 up to this point. Over the next four years, he would dominate the Welterweight division like no fighter would ever do again.

Robinson’s reign included two hard fought decision victories over legendary Cuban great Kid Gavilan. As stated in my article on Gavilan, there also is no known footage of these two fights between the two legends. Gavilan would have to wait until Robinson vacated the title to become champion. 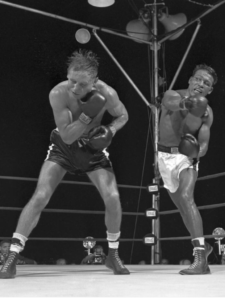 Robinson’s boxing style was a thing of beauty featuring beautiful foot work while landing combinations at will. He was also one of the few fighters in boxing history who could knock a man out by backing up. Unfortunately, his speed and power resulted in the death of Jimmy Doyle. On June 24, 1947, Robinson defended his title for the first time against Doyle in Cleveland, Ohio. A few days before the fight, Robinson had a nightmare that he killed Doyle during the fight. Immediately, Robinson tried pulling out of the fight. Robinson was threatened with being stripped of his title if he refused to fight. In the ninth round, Robinson landed a spectacular left hook. Doyle never regained consciousness and died. This time, I’m thankful that there is no footage of this fatal fight. Doyle had promised to buy his mother a house. Robinson, in honor of Doyle, bought Doyle’s mother the house Doyle had promised her.

Sugar Ray Robinson finally relinquished the Welterweight title in the fall of 1950. During his 10 year run as a Welterweight, he had a record of 111-1-2. That’s right, 111 wins against only one loss and two disputed draws. He was the idol of a young Cassius Clay, who would emulate his style in the same fashion as a young Michael Jackson would emulate James Brown. Sugar Ray’s dancing with the hand speed and power has only been duplicated by a 1990’s Roy Jones. Robinson dominated the 147-pound division during a time in which the division was loaded with several future Hall of Famers. It’s one of the many reasons that he’s not only the greatest Welterweight of all time, but the greatest fighter of all time as well.