Robert Silva is back with his fourth greatest Welterweight, Thomas Hearns.

As a child, as with many young boxing fans back then in the late 1970’s, my first boxing idol was Muhammad Ali. The first fighter I idolized from the very beginning of his career was the “Motor City Cobra” Thomas “Hitman” Hearns, the fourth greatest Welterweight of all time.

In Hearns’ amateur career, he only scored 11 knockouts in over 160 fights as a tall and lanky lightweight. It wasn’t until local Detroit and Kronk gym trainer Emmanuel Steward modified Hearns’ style right before his pro debut that the vaunted “Hitman” power began to surface. Beginning with his pro debut in November of 1977, Hearns went on to knockout his first 17 opponents. The majority of these fights were held in Hearns’ hometown of Detroit. Detroit boxing fans came out in droves to support their local hero. At the time, I followed Hearns’ early career by reading boxing magazines such as The Ring and World Boxing. These magazines built Hearns as an indestructible monster who stood 6’2″ and 147; a giant among Welterweights. 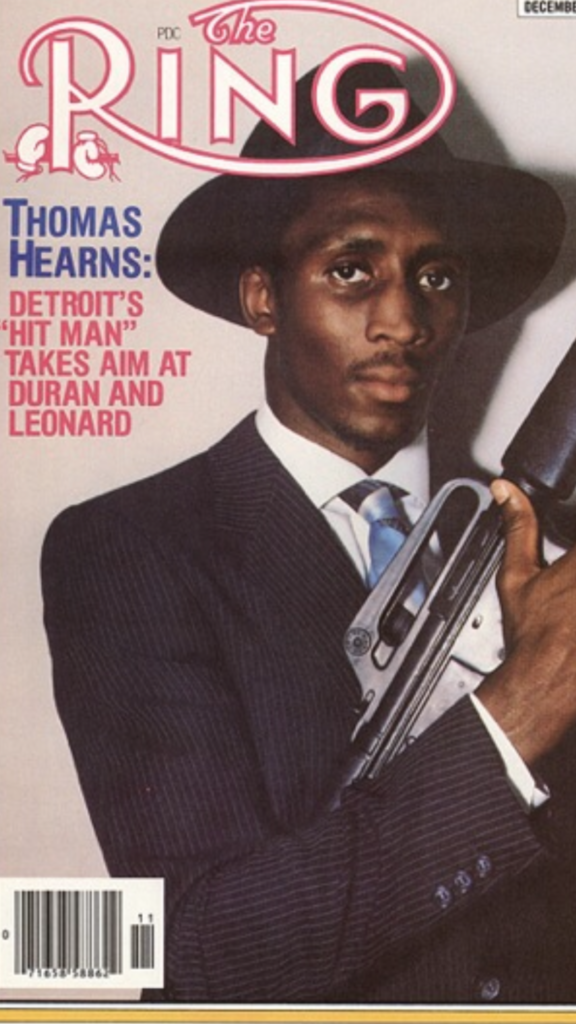 The first time I saw Hearns fight was his first nationally televised fight on January 11, 1979 versus highly rated Canadian Welterweight Clyde Gray. I couldn’t believe what I saw on my small, black and white television. Hearns was indeed a lanky giant, but his skills were much more elaborate then the boxing magazines had detailed. His left jab was, in my opinion, as good as then Heavyweight Larry Holmes’ legendary left jab. Hearns’ jab was like a battering ram, landing all night on Gray. Gray took a horrific beating, eating jabs and Hearns’ missile of a right cross, finally being finished in the 10th and final round. As the fight ended, my father and I saw what we felt was going to be one of the greatest fighters of all time.

Hearns’ assault on the Welterweight division continued throughout 1979, almost blinding top Welterweight contender Harold Weston in May, causing Weston both a detach retina and premature retirement. It wouldn’t be the last time Hearns’ jab would cause such major consequences for a fighter. Hearns’ sojourn would eventually garner him the number one contender spot for the WBA Welterweight title held by longtime belt holder and devastating puncher Jose “Pipino” Cuevas. Their fight, held on August 2, 1980 in Detroit’s legendary Joe Louis Arena, was built as World War II. It was more akin to the Boston Massacre.

My father was correct in his assessment that the 5’8″ Cuevas was tailor made for Hearns. Hearns’ performance that night was offensively perfect. His jab and legendary right cross landed at will throughout the opening stanza. Hearns’ game plan, as orchestrated by Steward, was to attack Cuevas because Cuevas couldn’t fight backing up. Cuevas, despite his scary power, couldn’t keep Hearns off him. Finally, towards the end of the second round, Hearns landed two consecutive spectacular right crosses that dropped Cuevas face first. Amazingly, Cuevas got up at nine out on his feet. His corner ran in and immediately stopped the fight. At the tender age of 21, Hearns was on top of the world. The time was right for him to fight the winner of the upcoming rematch between Roberto Duran and Sugar Ray Leonard.

Hearns easily defended his WBA Welterweight title three times before signing to fight Leonard in what would be simply be called “The Showdown.” The fight would be held outside in the Caesars Palace parking lot in Las Vegas. The reason they held the fight outdoors was because the venue inside was too small to hold such an epic fight between the two best fighters on the planet. On September 16, 1981, Hearns and Leonard put on one of the greatest fights in boxing history.

My father and I watched this fight on closed circuit in a South Bronx theater. My father was inebriated and was boasting that Hearns was going to kill Leonard. The first five rounds saw Hearns dominate Leonard, landing his jab and right cross at will. Leonard couldn’t outbox Hearns, as Hearns was too much for him. As great fighters do, Leonard changed his approach. He began stalking Hearns and attacked Hearns’ body, staggering him several times in rounds six and seven. Then Hearns changed his approach beginning in round eight. He began to move and stay outside, outlanding Leonard with his jab. After 12 rounds, Leonard was way behind on all three scorecards and his left eye was almost completely shut. He needed a miracle.

The 13th round saw Leonard desperately attack Hearns with feverish combinations, staggering Hearns and Hearns barely survived the round. Finally, in the 14th, Hearns was helpless and completely exhausted when referee Davey Pearl stopped the fight. It was the most magnificent fight in the history of the Welterweight division. It was not unlike seeing Michael Jordan and LeBron James in their primes playing each other in a one-on-one game of basketball. Both Leonard and Hearns lost and won in this fight. Hearns, despite losing, showed the world his greatness by showing heart and sublime boxing skills no one knew he had. Leonard, despite losing, would suffer a detach retina in his left eye due to the punishment he took in the fight. Leonard would only fight one more time before announcing his retirement a little over a year later.