In the history of boxing, few fighters had an IQ greater than Raymond Charles Leonard. His boxing intelligence, along with his natural born charisma and incredible talent, made him the third greatest Welterweight of all-time.

After winning the Light Welterweight gold medal at the 1976 Montreal Summer Olympics, Leonard decided to retire from boxing and enroll in college. However, that decision wasn’t feasible because he was raising his young son Ray Jr. with his fiancée Juanita. His father had also become seriously ill, forcing Leonard to forsake his collegiate plans and turn pro.

Instead of signing with the then kings of boxing, Don King and Bob Arum, Leonard turned to Baltimore millionaire and powerful attorney Mike Trainer to be his financial and legal adviser. Trainer then brought in legendary boxing trainer Angelo Dundee to be Leonard’s chief trainer. Trainer also secured a lucrative deal with ABC to televise all of Leonard’s fights. Leonard, whose style was almost a carbon copy of his idol Muhammad Ali, now had Ali’s trainer and the iconic announcer Howard Cosell helping mold his career. With Dundee guiding him in the ring and Cosell announcing his fights, the formula was set to make Leonard the successor to Ali as the next, major boxing star. 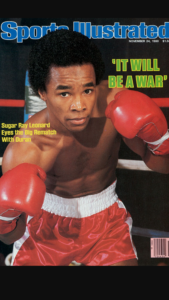 In 1978, Dundee and Trainer turned down an offer to fight fellow rising Welterweight star Thomas Hearns for $250,000. Dundee felt that instead of fighting for thousands, they should fight for millions once both were established as the best fighters in the world. Incredible foresight by one of the great masterminds in boxing history. Instead, Leonard would hone his craft beating very tough fighters in Randy Shields, Floyd Mayweather, Sr., Marcos Geraldo, Adolfo Viruet, and Pete Ranzany. This would lead to a fight on September 28, 1979 against veteran Andy Price, a tremendous boxer who had defeated then WBA Welterweight champion Pipino Cuevas before Cuevas had won the title. Cuevas had ducked Price since, and if Price defeated Leonard, he would get a shot at the WBC champion Wilfred Benitez. Leonard put on an incredible display of hand speed and power, knocking Price out in the opening round and securing a shot at Benitez’s title. It would be a battle of two great boxers in their early 20s, held on November 30, 1979.

The fight with Benitez was televised in primetime by ABC, with Cosell as the announcer. Benitez was one of the greatest defensive fighters of all-time. He had defeated Mexican great Carlos Palomino earlier in the year to win the title. Leonard knew he was in the toughest fight of life and he rose to the occasion. Leonard stayed in the pocket throughout the entire fight, as any dancing would make it harder to hit Benitez. He relied on a great jab, sharp right crosses, and effective body punching whenever Benitez was on the ropes. In my opinion, this was Leonard’s greatest performance of his career, as he continually beat the master boxer Benitez to the punch. He dropped Benitez in the third round with a stiff left jab.

Entering the 15th and final round, Benitez knew he was way behind and needed a knockout to win. He engaged Leonard in a firefight in the final stanza. Leonard out-slugged Benitez throughout the round, knocking him down again with less than 15 seconds left in the round. Benitez got up, but with glassy eyes and bleeding profusely from his forehead, was in no condition to continue. The referee stopped the fight with six seconds left. Leonard, at the tender age of 23, was now the WBC Welterweight champion of the world and the undisputed top star in boxing, as Ali had retired just a few months prior to this fight. Leonard began focusing on a mega-fight with Panamanian superstar and legend, Roberto Duran.

After destroying British contender Davey Boy Green on March 31, 1980, Leonard signed to fight Duran. The fight guaranteed Leonard nine million dollars. It would be held June 20, 1980 in Montreal, the site in which Leonard won his Olympic gold medal four years prior. Duran was Joe Frazier to Leonard’s Ali, and the preflight buildup was just as nasty. Duran made several sexually provocative statements to Juanita, who was now married to Leonard. This really infuriated Leonard to the point that when the fight began, he unwisely decided to go toe-to-toe with Duran.

In the second round, Duran staggered Leonard with a spectacular right cross. Leonard admitted afterward that he was stunned for an additional three more rounds. Duran and Leonard staged one of the greatest fights in the history of the Welterweight division in front of 46,000 fans. Duran won a razor thin unanimous decision. Despite losing, Leonard, like Ali did in his first fight with Frazier, showed the world both a great heart and ability to take a punch. Now, like Ali, he had to prove he could revenge his first loss. He did so with a bang.

The rematch occurred five months later in the historic New Orleans Superdome. The man his parents named him after, the incomparable Ray Charles, sang “America the Beautiful” before the fighters were introduced. My father, while we watched this fight on closed circuit in Madison Square Garden, told me at that moment that Duran had no shot to win that night. Leonard, spurred on by revenge and Charles’ presence, put on an Ali-like performance, dancing and moving, making Duran look slow and old. Duran had to lose around 50 pounds to make weight. He was slow and listless.

In the seventh round, Leonard embarrassed Duran by landing a bolo punch. Then, the incredible occurred. Towards the end of the eighth round, Duran threw up his hands in disgust and just quit. His infamous words have become part of boxing’s lore; “No Mas.” Leonard exacted his revenge by making the most macho fighter in the history of the sport quit. In doing so, he regained his title and his next major fight was now set to be made: an epic encounter with Hearns. My last article reviewed Leonard’s dramatic, come from behind victory, a victory that made him the undisputed Welterweight champion of the world.

Despite his incredible victories over two legends in Duran and Hearns, Leonard was forced to retire at the age of 26 in November of 1982 due to suffering a detached retina. He wound eventually make several comebacks, but those are stories for another day, as this retirement ended the chapter on his career as the third greatest Welterweight of all time.