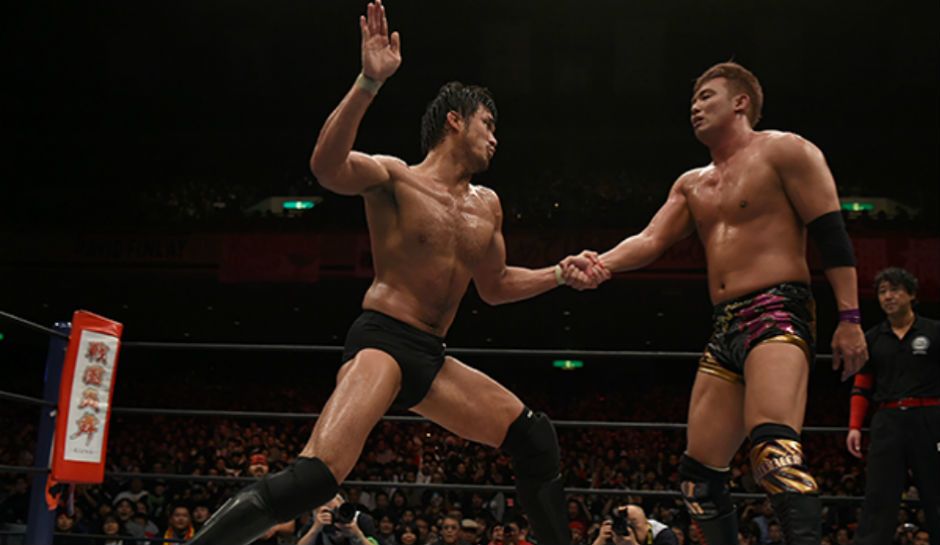 Welcome to the second edition of my top 5 matches of 2017. This list is my favorite matches that took place from April to June of this year. What makes pro wrestling so great is that there is a style of wrestling for everyone. Wrestling fans are so passionate about this issue, and I always love hearing from fans on why they liked or disliked a match. Drop me a comment if you have your own list.

In case you missed the Q1 Top 5 list, check it out before reading this one.

If you are a young up-and-coming pro wrestler, you need to study these two men. Hiroshi Tanahashi wrestled this match with a torn bicep. Japanese wrestlers have the mentality of working hurt for the good of the company and since Tanahashi is a main eventer and so important to the plans of New Japan, he’s continuing to wrestle with this injury. Personally, I think it’s more important to have the surgery, heal up and extend your career instead of working hurt and possibly shortening it.

Though he is hurt, Tanahashi put on a top guy performance once again on this night. He is truly one of the greatest wrestlers of all time. Tanahashi worked on Naito’s bad knee, while Naito worked on Tanahashi’s bad arm. The finish caught me by surprise. Not because Tanahashi went over, but how we went over. It’s a brilliant display of storytelling and drama.

Shuji Ishikawa is a name that many hardcore pro wrestling fans know and love. He started his career late. He is a massive man, but people love him because he has a personality of a cuddly bear outside the ring. Inside the ring, he has a calm demeanor, but is such a powerhouse.

Suwama is All Japan’s former “ace” turned long tenured grumpy ass kicker. Suwama’s wrestling is not pretty, even though he has a great amateur background. He is a punch, kick, slam and suplex type of guy – my kind of pro wrestler. Ishikawa is of that same mold. The atmosphere for this match was electric and the crowd ate up everything these two did. This is not a twenty plus minute match. This is an all out war for nearly fifteen minutes. If you like two massive dudes trying to kill each other, this one’s for you.

On the backs of Kento Miyahara and All Japan’s booker Jun Akiyama, AJPW over the last few years and steadily grown their audience. A promotion once left for dead after Keiji Mutoh nearly ran it into the ground, AJPW major cards have become must see for hardcore puroresu fans. Miyahara has unseated Suwama as All Japan’s “ace” and has taken that position and run with it. When it comes to art of selling pain in pro wrestling, Miyahara is a master. He also has one of the best fiery comebacks in the sport today.

After winning the 2017 Champion Carnival Tournament, Shuji Ishikawa challenged for the Triple Crown title. The fans went nuts for every twist and turn of the story they told on this night. The crowd was split down the middle, but they also loved both men. As the match continued, you felt like you were watching something special.

Okada and Omega’s first encounter at the Tokyo Dome this year was a great match, but I felt it was overrated. It was a five star that match that became an even bigger on social media after the number one journalist in pro wrestling, Dave Meltzer of the Wrestling Observer, gave the match six stars. Again, I felt the match was overrated, but whatever issues I had with the match, I did not have with the rematch.

This was the most anticipated rematch in modern pro wrestling and both Okada and Omega delivered another classic. I think Kenny Omega is a top level worker, but at times his antics like his over-the-top facial expressions take me out of his matches. Those over-the-top facial expressions remind me that this just a performance. In 2017, I have really grown to become of a fan of his work and I believe I have a better understanding of his work. My interpretation is that in the beginning of Kenny Omega’s big matches, he likes to have fun, but gets that killer instinct when it is time to finish the match.

In the rematch, there was no comical facials and I was never taken out of the story they both told in and out of the ring. For one hour, they put the pedal to the metal and never let up. Both men are such well conditioned athletes and to keep that pace for one hour was something special to watch. The story of their first match was that Omega could never hit his finishing move, “The One Winged Angel” on Okada. In the rematch, he finally hit it, but Okada was too close to the ropes.

Another memorable and clever spot was Okada attempting to hit his finisher, “The Rainmaker Clothesline”, but Omega simply collapsed from exhaustion and Okada missed the move and his momentum took him flying across the ring. That was one of the most beautiful spots that I have seen in a very, very long time. Very often, sequels are better then the original. Okada versus Omega at the Tokyo Dome was Star Wars and their rematch at Dominion was Empire Strikes Back.

For weeks, I kept debating with myself if Okada versus Omega at Dominion was better then Okada versus Shibata, but I re-watched both on AXS TV and Okada versus Shibata is still to me the 2017 Match Of Year so far. This was a true masterpiece that saw both men give it their all and for one, that possibly cost them their career.

It is unfortunate that when people think about this match, they will think of Shibata’s sick head butt that caused a subdural hematoma, effectively causing his career to end. When I watched the match again, I still cringed hearing the thud when their heads knocked together. Sadly, wrestlers all over the world continue to do these shoot head butts. That is pro wrestling for you, as the consequences of the past always go ignored.

Shibata was on fire to open the match, clearly having the advantage of the mat with his catch wrestling training and using UK “World Of Sport” counters out of holds. Though Kazuchika Okada is New Japan’s biggest star currently, the crowd on this night was pro-Shibata and they wanted to see him walk out as IWGP World Champion.

A true worker that Okada is, he read the crowd and turned himself “heel” in the match by not breaking clean. From then on, it was a full-on war between them. Shibata, for most of the match, always seemed just one step of head of the young world champion. A moment that made me lose my mind was when Shibata no-sold the Okada’s clothesline finisher. Not only did I lose my mind, but so did the crowd in attendance that night.
See what happens when you protect your finish?

Shibata, who is known for his hard penalty kicks, was destroying Okada’s arm. He was throwing hard kick after hard kick. I was amazed how Okada’s arm did not get broken. My suspension of disbelief was deep into this match. That is why I believe Okada versus Shibata is one of the greatest matches that I have ever seen and that is why it is gets top billing for the my top match of quarter two of 2017.