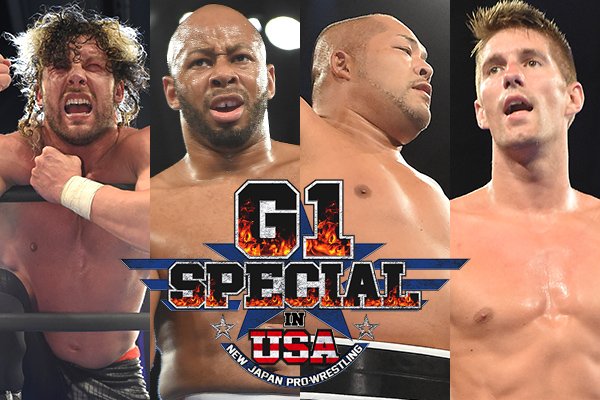 
Night one of New Japan Pro Wrestling’s foray into the United States was very fun. Night two was also really good. We posted a podcast last night and gave our live thoughts about night 1, and I wanted to write some thoughts about night 2, which featured Kenny Omega wining the first IWGP US championship, beating Tomohiro Ishii in the finals.

Here are my live thoughts on G1 Special USA night 2:

The Young Bucks and Roppongi Vice had a good match that I didn’t rate as highly as others, but the crowd ate it up. Both teams worked their asses off and the crowd teetered back and forth between who they wanted to win.

The multi-man tags were slightly better on night two than night one for whatever reason. The luchadors were excellent tonight.

It was fun to see Will Ospreay in a match with Okada and Cody Rhodes. Ospreay took an amazing Cross Rhodes.

Soon thereafter, Matt Jackson tweeted that the Young Bucks were going to honor Dave’s father with craziest Meltzer Driver ever.

Gonna hit the craziest Meltzer Driver ever tonight in honor of Dave's dad.

Two nights in a row, all the wrestlers were on their A game. This was just about as equal to them as the big New Japan shows. Everyone worked so hard. Maybe even too hard in some aspects.

Kenny Omega wrestled three times in two days and was going 100 miles an hour in all three matches. Ishii did as well. In fact, Ishii’s three matches were probably better than Omega’s on average.

While I didn’t like the pacing in all the matches on night two (which I’ll get to below), you can’t question how hard everyone tried to entertain the fans. They knew it was a huge opportunity and they made sure they took advantage of it.

Even Billy Gunn tried his best to have a quality match with Hiroshi Tanahashi.

After night 1, Cody Rhodes and Kenny Omega had an argument. While it very much looks like the Bullet Club is going to break up at some point, it didn’t happen this weekend. Instead, we got a major step in that direction.

After Omega won the tournament finale, Cody came to the ring and took the belt away from him. The fans were very upset at Cody (who got the most heat all weekend long). He held the belt for a few beats and then placed it around Omega’s waist.

This was Hulk Hogan putting Elizabeth on his should while Randy Savage gives him the side eye. It was a great part to the next step in the storyline.

The reason why I’m not as high on the Bucks match with Rocky Romero and Trent Barreta is mostly because of the pacing. You know what you’re getting with the Bucks. You’re getting a high octane match that goes so fast that if you blink you miss something and you’re not going to get a ton of selling until the slow spots in the match, if there are any slow parts.

It’s a nitpick, and I don’t generally have an issue with the Bucks’ TV matches, but for whatever reason, it stood out more to me watching them live.

Watching Omega wrestle three times in two days was both amazing and tiring at the same time. He’s such a fantastic athlete with great stamina. But watching him so often, you were able to see more of a routine of spots. His match with Mike Elgin on Saturday was a lightweight version of his match with Ishii all the way down to the running knee spots.

You’re going to see routines with guys when they wrestle three matches in two days, especially when two of those matches are fairly long. But it was noticeable.

I wanted a Kushida IWGP Junior Heavyweight Championship title defense badly and didn’t get it. Instead, Kushida was in an 8-man tag on night one and a 6-man tag on night two. He came across as a big star on both nights, but selfishly, I wanted to see him defend his title in a singles match.

There was only one thing that sucked about both shows and it was the seating. The seating was all on the floor which meant that 10% of the crowd decided to give up their seats, walk further away from the ring just so they could stand up and have a better view of the show.

However, I was quickly reminded that had I enjoyed my seat instead of standing up all night, it would’ve been a different story.

All in all, it was two great nights of wrestling. They said they wanted to come back in 2018.

NJPW Wrestling Dontaku 2022 and the Resurgence of Bullet Club