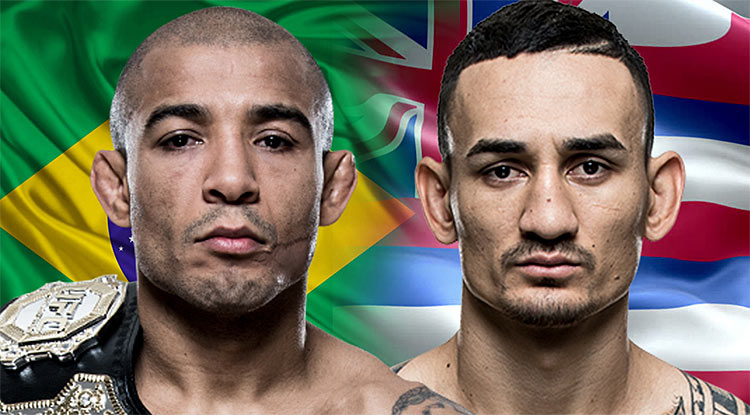 Check out our UFC 212 coverage.

One of the great things about the UFC only holding one PPV per month, and sometimes longer than that, is that when it’s PPV time, I’ve missed the UFC enough to where I look forward to the show, no matter the card.

Part of that for me though is to mostly skip the other shows on FS1 and Fox so that I can actually look forward to a UFC show. If I didn’t do that, I’m not sure that I’d be all that amped for more than a handful of UFC shows these days.

What’s to like about this show? You have one of the greatest fighters in the history of the company facing someone who can be a new star if he can win. If Aldo wins, he continues his legendary career which is only sullied by a loss to Conor McGregor. If Holloway wins, he beats a legend in his ascent to possible stardom.

There should be some other fun fights on this show, including the semi-main event which pits Cláudia Gadelha against Karolina Kowalkiewicz. Vitor Belfort and Nate Marquardt is a fun throwback fight which could resemble a rock ’em sock ’em robots kind of fight.

In the second, Medeiros landed a strong right hand and then followed up with a picture perfect left hook. Silva didn’t look out on the ground, but instead of trying to defend the shots on the ground, he looked like he was trying to get up. The referee stopped it.

Winner: Yancy Medeiros by way of 2nd round TKO

They made Bamgbose cut one of his big toenails for being too long. He just ripped it off.

The first round was wild. Bamgbose came out fast and it looked like he may have been a killer in disguise, but his punches were loopy and he got tired quickly. Borrachinha was more methodical, weathering the storm and just started lighting him up. Bamgbose spent the second half of the round just covering up and taking punishment.

Borrachinha unloaded in the second. He finally put him on his back with a leg trip and it was stopped after some nasty ground and pound. Borrachinha looked great. Bamgbose was the perfect opponent for him.

Marquardt got a trip early and used shoulder strikes on the ground. The referee stood them up fairly quickly. He was more active, throwing and landing lead right hands. Nothing was big, but Belfort couldn’t really pull the trigger. Belfort landed a kick which came after Marquardt tripped against the fence.

The scoring will be interesting in the second round. Vitor landed the best shots, wobbling Marquardt and hurting him against the cage. But then he decided to stop being active and let Marquardt back in the round. Marquardt used his length with kicks and punches to close out the round.

Marquardt let Belfort back into the fight. He did such a good job earlier with feints and keeping Belfort away, but Belfort started to get busy in the last two minutes and probably won the round. He used mostly body kicks and one shot punches on Marquardt. Marquardt’s face was bruised up by the end of it.

If you score the fight as a whole, Marquardt should’ve won the decision. The key was the second round. Marquardt had most of the round, but he didn’t do too much damage. Vitor had the best flurry and wobbled Marquardt which may have been where he won the fight in the eyes of the judges.

Gadelha landed a vicious elbow early. She then scored a tough double underhook takedown. She powered her way into getting her back and then sunk in the a rear naked choke.

Winner: Cláudia Gadelha by way of 1st round submission

Aldo blasted him with a wicked multi-strike combination. Holloway came out of it fine and didn’t look hurt, but he got blasted several times. Holloway came back with about a minute out with a nice right hand. But Aldo really outclassed him in the round. He landed a wicked uppercut as well.

Second round was closer, but Aldo still got the better of the exchanges. Aldo started to get more comfortable late in the round and landed some clean combinations. Aldo’s mouth was open, which made it look like he was tired, but he didn’t slow down. But Holloway is back in this fight. Hollway started clowning late and it costed him as Aldo landed some nice shots late in the round, including a spinning kick.

Aldo is tired. Holloway is picking him apart now. He knocked him down flat on his back and went to the ground. Aldo was fighting to stay out of the mount, but Holloway got it and started landing some hard punches. Aldo looked out a couple times. Then Holloway tried to get a choke in. Aldo fought it. But there was too much time left. Holloway was unloading shots as Aldo was turned over. Finally, Big John stopped the fight. What a performance by both guys, but especially the new champ.

Winner: Max Holloway by way of 3rd round TKO