It’s the 20th anniversary of the bite fight.


Yesterday was the 20th anniversary of the second fight between Mike Tyson and Evander Holyfield, later nicknamed, “The Bite Fight.” It was also one of the craziest nights in boxing ever.

On June 28, 1997, both men walked into the ring with what happened 6 1/2 months prior in the first fight on most everyone’s mind. On that night, Evander Holyfield beat up the big bad wolf and did so in impressive fashion.

In order to even discuss the second fight, you have to throwback to that first fight. After spending four years in jail, Tyson fought four times, winning two of his fights in the first round and the other two in three rounds. As a whole, he fought eight rounds in just over a year, winning two heavyweight championships.

On September 7, 1996, he beat Bruce Seldon in one round. This was the same fateful night that Tupac Shakur was shot. His very next fight would be a title defense just two months later against Evander Holyfield. 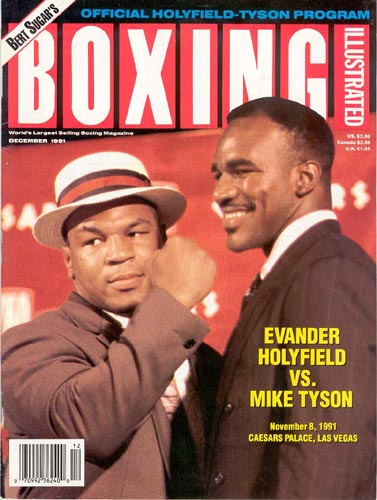 After beginning his career 28-0, Holyfield would go 4-3 over the next four years, losing to Michael Moorer and Riddick Bowe twice. He had retired in between because of a heart condition. I’m sure Tyson’s camp saw him as washed up, but someone with name value, and the fight had been anticipated since before Tyson lost to Buster Douglas. It had even been promoted in late 1991, but an injury to Tyson delayed it, and soon he was in jail.

At the time, it was the most purchased boxing PPV ever, doing nearly 1.6 million buys.

Tyson came in muscular and heavy, weighing 222 pounds. He walked to the ring to Tupac Shakur’s Toss It Up as an ode to his old friend. Holyfield was a shredded 215 pounds. Tyson opened as a 25-1 favorite, but according to the Showtime broadcast, the odds had come down to 6-1 by fight time.

Early on, Tyson looked like he was going dispose of Holyfield like his previous four fights. But rather than backdown, Holyfield was actually getting Tyson to step back. He was using his 6 inch reach advantage to strike first and the second Tyson would try and come inside, Holyfield would tie him up. It was a brilliant strategy, though made for a dull fight for most of the early rounds.

Tyson wasn’t good fighting on his heels and when he had the opportunity to come inside, it was generally with one big shot, which Holyfield could see coming. The fight was back and forth until the 6th round when their heads bashed together, cutting Tyson over the left eye. It was like when Rocky cut Drago. For whatever reason, Tyson was very bothered by the small cut as if seeing his own blood was a sign of weakness slipping out.

Holyfield knocked him down awkwardly when Tyson rushed in and Holyfield hit him to the body, knocking him off-balanced and to the ground. Holyfield was the savvy vet, rubbing his head on Tyson’s eye whenever he had the opportunity. And it was clearly bothering Tyson. In the 7th, Tyson came in fast and rather than move backward, Holyfield ducked his head right into Tyson’s eye again. It would prove to be a strategy for Holyfield as it made Tyson think twice about coming in recklessly.

Tyson was a beaten man for the rest of the fight. Holyfield had him ready to go in the 10th round, but Tyson was saved by the bell. And then referee Mitch Halpern stopped the fight soon after the 11th round started. In Tyson’s book, Undisputed Truth, he wrote that Halpern was “drunk as a skunk” during the fight and he could see it in his eyes being an addict himself. I’ve never heard anything else about that, but his opinion of the referee would play into the second fight.

The aftermath was sad and hilarious all at the same time. Dr. Ferdie Pacheco was trying to get some insight on how Holyfield won the fight and all Holyfield would do is repeat that it was all God and that his God was the only proper God. Jim Gray interviewed Tyson and showing how out of it he was, Tyson couldn’t remember what had just happened.

The buildup to the second fight was either that Holyfield’s style was Tyson’s kryptonite or that Tyson didn’t take Holyfield seriously and if you take away the head butts, Tyson could do work on the inside. Both sides believed their guy was going to win.

By the first round of the second fight, you could sense that it was going to be more of the same. This time, it was Mills Lane as the third man inside the ring. Halpern was scheduled for the fight again, but opted out because there was so much heat on him from Tyson’s side. Tyson would go onto say that Lane was actually a Holyfield fan and the guys he’d have preferred were vetoed by Holyfield’s camp.

Tyson and Holyfield had a competitive first round, but again, Holyfield was directing where the action was going. And then at the beginning of the second round, it happened again. Tyson tried to come inside with a right hand and Holyfield ducked his head down right into where Tyson’s head was going to land. It was Tyson’s right eye this time that was cut. And once again, once Tyson saw his own blood, he seemed to panic. He tried to get rough with Holyfield, nearly arm-barring him at one point. But Holyfield was able to push him off. 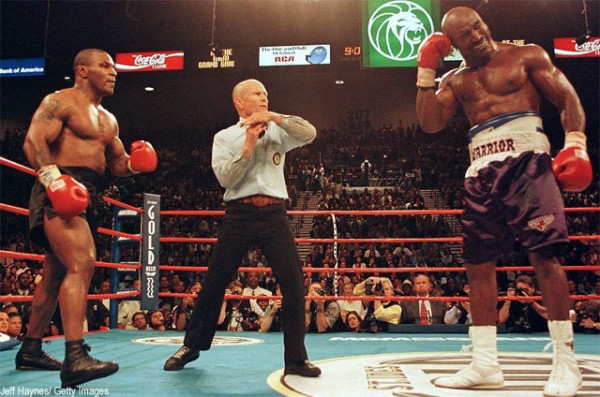 And then all hell broke loose. As if to give us a sense of what was about to come, Tyson started the third round without his mouth piece. His corner yelled at him to come back and put it in as did Holyfield’s corner.

Oddly enough, the 3rd round might’ve been the best Tyson had looked in both fights. Holyfield was overly aggressive and Tyson was ducking his right hand and coming back with hard shots that were landing. The crowd, which had been pro-Holyfield for the first fight, was starting to chant “Tyson!” And then with under a minute left, Tyson spit out his mouth piece and bit Holyfield’s ear. Holyfield jumped around and started pointing at his ear. He turned his back on Tyson and Tyson two-hand shoved him.

Mills Lane wanted to disqualify Tyson and Marc Ratner, then head of the Nevada Athletic Commission, asked him if that’s what he wanted to do. Lane seemed to question his own decision and went to the doctor to see if Holyfield could still fight. Instead, he took two points from Tyson and the fight continued.

Tyson again came in hot and looked to have renewed energy. But he attempted to bite Holyfield’s ear again. Lane didn’t seem to see it because he didn’t even say anything, even though Holyfield sold it. After the round was over, Lane must’ve heard from someone ringside what had happened, and he decided to disqualify Tyson.

The fight was a huge success, doing nearly 2 million buys on PPV, which was again at that time, a record. But if left a bad taste in the mouth of fans who at this point were disgusted by Tyson’s actions. I also think fans saw Tyson as an unbeatable monster and Holyfield took that aura away.

Holyfield had two more wins before fighting Lennox Lewis. After a draw and then a loss with Lewis, Holyfield became a 50/50 fighter, going 8-7 before finally hanging it up for good. After the second Holyfield loss, Tyson would go 5-3-2 with the two no-contests being because of a Tyson foul and a win overturned because of a positive drug test. He’d also run into Lennox Lewis and look like a shell of his former self. That fight nearly matched “The Bite Fight” in PPV buys and was also a huge success.

Cup of Coffee in the Big Time: Pete Rose is a Chicken?