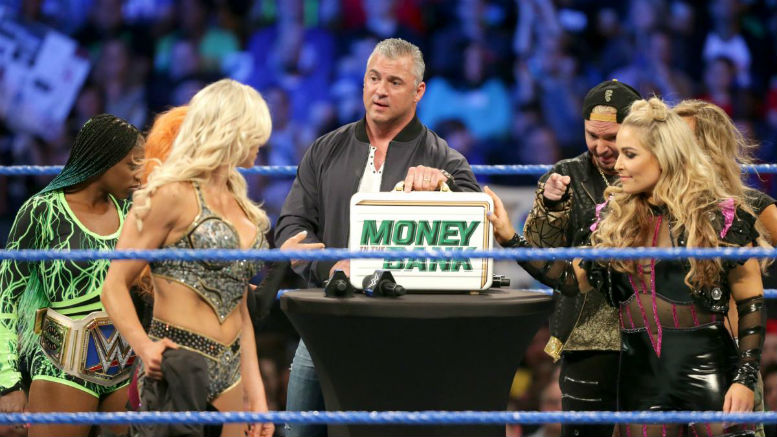 Looking at why Smackdown Live’s ratings were up so much this week.

The match opened the PPV show last Sunday and started off like it was going to be something very memorable. And then, it ended, and ended flat.

Becky Lynch climbed to the top of the ladder and James Ellsworth, Carmela’s second, interfered, dumped her off the ladder. He then climbed to the top and grabbed the briefcase and dropped it to Carmela. That was it. All the promise of a classic match was thrown to the side due to the temptation of a cliff-hanger ending.

At one point in time, WWE PPVs used to be big spectacles with important matches that would either end feuds or create new ones. When they decided to run monthly PPVs in the late 90s to keep up with WCW, the shows became less important, but they still had tremendous star power and they were still profitable shows. WWE would still try to give you your $30, $40, or $50 worth of wrestling.

With the WWE Network PPVs (or special events) being closer to $5 in value these days (with 2 events per month), the onus on WWE to deliver a spectacle to viewers monthly is less important than it’s ever been. Some of the shows feel like glorified Raw and Smackdown Live shows. The last two Smackdown branded PPVs, Backlash and this one, haven’t been good and based on discussions I’ve seen on social media, are becoming more skippable by the month.

The go-home Smackdown show for this PPV did the lowest Smackdown rating of the year. When I saw that number, I wondered if it meant that they’d try to use the PPV to create intrigue for the next TV show. And while they could’ve done that in a few different ways, I didn’t expect them to sacrifice the women’s Money In The Bank match because of how well they marketed it. When I saw how it ended, I felt like the company pulled a bait and switch.

I know that some felt that it created heat. I can see that argument. I also saw how others saw it as a lack of progress for the women’s division having Carmela only win because of her goofy male second. That’s also related to getting heat. Whatever anyone thought, it didn’t have to be booked in such cheap fashion.

The only reason for having the match end in the way it did was of course, to build up another match. They’ll rematch on next week’s Smackdown, which should be good for the ratings.

We know that generally, Raws and Smackdowns coming off PPVs gain more viewership. But I wonder if sacrificing that match was even one of the reasons for Smackdown’s rating being up.

I was reading Paul Fontaine’s ratings breakdown and there’s a clear relationship between Smackdown’s ratings and Raw’s ratings.

For the year, Smackdown is retaining nearly 83% of Raw’s audience. Thus, when Raw is up, so is Smackdown.

So maybe it doesn’t really matter if there is a cliff-hanger on the PPV. Maybe Smackdown’s rating is mostly reliant on how many people watch Raw. If so, maybe they shouldn’t sacrifice a PPV match they’ve been building for weeks just to try and pop a rating for the next couple weeks.

I hope WWE doesn’t truly believe their booking created the increase in rating. If they do, we’re going to see less payoffs on PPV shows.