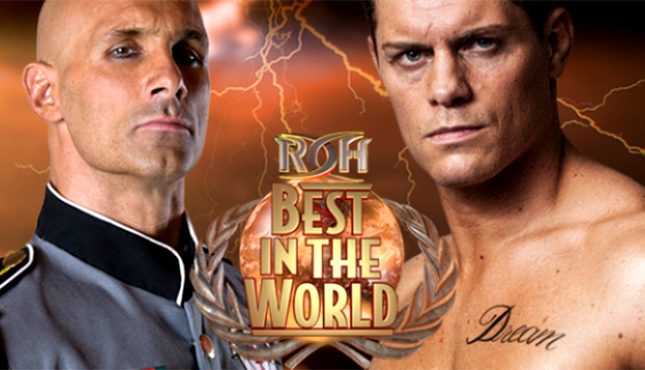 Check out our Best In The World live coverage.


We’ll be back with live coverage of ROH’s Best In The World PPV featuring Christopher Daniels vs Cody Rhodes for the ROH World Championship.

This match was weird. It was under lucha rules. Guerrero won with a school boy. He hit Taven with his finisher and had to be pulled into the right spot by his hair so Marseglia could hit a swanton.

It’s a country whipping match where each guy has a strap attached to his wrist. Kazarian launched himself to the outside, landing on Page’s shoulders and then did a hurricanrana. The strap seems to be throwing their timing off.

Page introduced a belt with nails taped to it. He didn’t hit Kazarian with it and Page lost it. Kazarian didn’t pick it up initially, but then did. Page hit his Rite Of Passage for a two count. He then hit Kazarian with the belt and cut him up. Page was also cut up.

Kazarian hung Page over the middle rope with the belt and Page had to tap.

There was too much stuff going on to even really keep up. Early on, the heels tried to control the ring and keep Jonathan Gresham on their side. It kind of worked, but the announcers didn’t really sell the idea too much.

Late in the match, the babyfaces were in the ring with only Titus and started beating on him. He kicked out of the a pinfall with all four babyfaces in the ring, which looked weird. But then all the heels came in and they were put in submissions with Gresham’s Octapus on Titus who tapped out.

Punishment Martinez came out to clean house on the babyfaces.

This was the best match so far wrestling-wise. Lethal went for his Lethal Injection, but didn’t get it. Young went to the top rope for his headstand finisher and hit it for a two count. Lethal hit the elbow off the top for a two as well.

Young pushed the referee down as he was setting up something with the beer keg. But the referee being down caused the ref to be late on a cradle on Lethal. Lethal reversed the cradle and pinned him.

After the match Young and Beer City Bruiser double teamed him, including doing the King Kong Bundy and Don Muraco spot on Hulk Hogan at Saturday Night’s Main Event. Young held his arms on the other side of the ring post while Bruiser did the avalanche. They then set Lethal on a table outside and Bruiser dove off the top rope onto Lethal and through the table.

Dalton Castle and the Boys Vs The Briscoes and Bully Ray

This was entertaining. Castle and the Boys is a fun act.

Bully Ray didn’t take his opponents all that seriously. He tossed around the Boys. He and Jay did the Wuzzup headbut, but it was more like an elbow to the gonads. Bubba Ray asked the crowd and they screamed at him to get the tables. Jay dove through the ropes to the outside.

Castle snugly cradled Mark for the surprise pin. The crowd loved it.

Winner: The Briscoes and Bully Ray

This was a great match. These guys worked together so well.

KUSHIDA won with a Back to the Future off the top rope and then another one in the ring. Right before, he split Scurll’s fingers after Scurll worked on his fingers the whole match.

Scurll used the chicken wing as well and Kushida used the arm bar and the hoverboard lock. All of the counter wrestling was fantastic. KUSHIDA has awesome charisma.

Right before the match was about the start, Chuck Taylor and Trent Barreta came out. Barreta wanted to turn it into a tornado tag with the Best Friends being added to the match.

This match was nuts. Because it was a tornado match, it was completely void of any sort of psychology or selling. But it was exciting and the crowd was going nuts.

It was more so a match of “Can you top that?”

The Bucks won the match after War Machine accidentally helped do a double Indytaker on Taylor and Barreta. They then superkicked War Machine so they wouldn’t interfere in the pin and Matt pinned Taylor.

Cody’s lip was cut early and it was bleeding more than you’d think.

Match was solid early on with good pacing, especially after the last match. They had to slow it down a bunch. Cody did a hip toss from the top rope.

They backed the referee into the corner twice. This was very similar to the Lethal match. Daniels rolled up Cody, but the referee was out of position. Scurll came down to the ring to give Cody a chair. Cody went to get it, but Daniels stomped his fingers in it. Then he gave the chair to Cody and pretended like Cody hit him. Cody was arguing with the referee and Daniels rolled him up again. Cody then hit the RKO onto the chair.

Cody hit the Beautiful Disaster Kick off the top. A table was set up outside by Cody. Daniels did a back suplex on Cody through the table. Daniels put him in the Koji Clutch but Cody got to the ropes. Cody spit water in his face and then hit the Cross Rhodes for a two. Daniels went for the BME but Cody got out of the way and he landed on his feet. Cody went for the Beautiful Disaster Kick again but missed. Then hit another Cross Rhodes for the win.