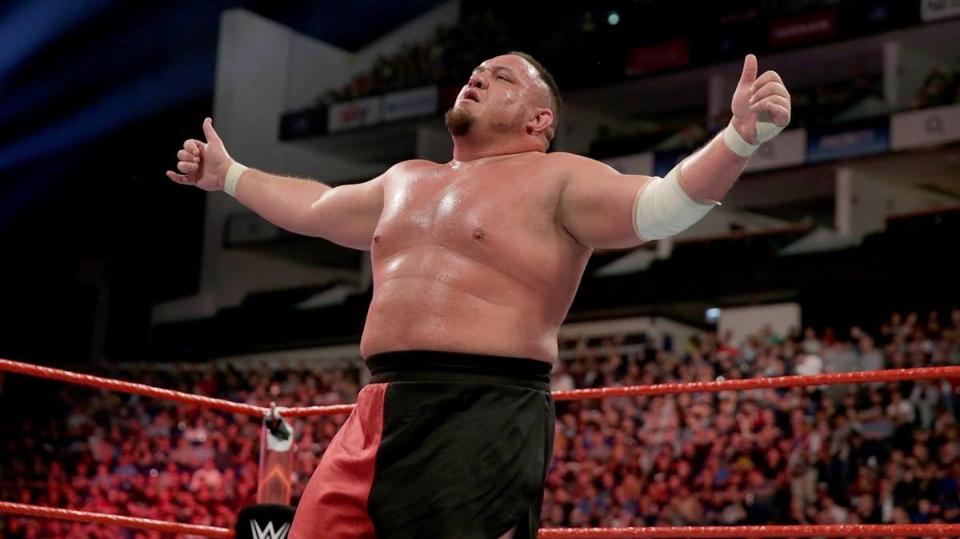 Samoa Joe is the number one contender to Brock Lesnar’s Universal title.


I didn’t get to watch Extreme Rules live because my Golden State Warriors faced the Cleveland Cavaliers in game two of the NBA Finals. Regular season games don’t often take precedence over WWE PPVs, but Finals games do.

Thus, I didn’t get to do live play by play for this show. Instead, I have some thoughts on Samoa Joe winning the match and the rest of the PPV.

Extreme Rules felt long. Much like last month’s Smackdown Backlash show, most of the matches seemed like extensions to regular TV segments and feuds rather than a culmination of anything special. But the difference between that show and this show was that the main event to Extreme Rules was awesome and the crowd was into it big time.

In my piece from Friday in which I handicapped the main event, I had Samoa Joe with the second highest odds mostly because the winner of this match is going to face Brock Lesnar at the Great Balls Of Fire PPV and I see Samoa Joe and Brock Lesnar as a possible main event feud down the line rather than just a one-off match. From what it looks like, the match at Great Balls Of Fire is just going to lead into the bigger match between Lesnar and Braun Strowman at SummerSlam.

I think Joe should be used as more than just fodder. He should be set up as a possible big feud for Lesnar down the line. But alas, he won the match and will get the title shot. I still think Seth Rollins was your best bet because he could lose to Lesnar next month and it won’t hurt him a bit. It could hurt Joe to be fed to Lesnar unless he puts up a helluva battle.

I thought the match was booked excellently. My only real qualm was was with Finn Bálor looked. I think they need to protect him more than they currently are. He didn’t get a ton of offense in this match, but did have the crowd popping after he hit the Coup de Grâce on Roman Reigns late. He went to cover Reigns but was pulled off by Joe who sunk in the rear-naked choke to win the match. Reigns, Joe, and Bálor shouldn’t be taking pinfall or submission losses at this point. Bray Wyatt or Rollins could’ve easily taken the pin fall and been no worse for the wear because of it. Joe and Wyatt were working together during the match and then Bray pushed him into a Rollins dive late in the match. Joe could’ve put the choke on Wyatt to get him back and win the match instead.

Outside of that, there wasn’t much to complain about. All five guys worked hard and everyone got their big moment. I sure hope they have some smart booking up their sleeve for next month.

The second best match on the show was Neville beating Aries with the Rings Of Saturn in the submission match. Technically, it was really good, but the crowd sat on their hands throughout. Part of the reason was because you couldn’t get them into it with near falls, but it’s mostly because the 205 Live brand is dead. With Neville’s work, he should be in the upper tier of guys in the company. But because he’s saddled on the stale brand, he’s just another good wrestler.

The Miz and Dean Ambrose kicked off the show with their match that was built on the goofy stipulation that the title could change hands by disqualification. I liked the pace of it, though it could’ve picked up a tad bit earlier than it did. Maryse was excellent in her role of trying to get Ambrose disqualified. They worked the match around the figure four with both guys hurting from the move. But the finish ended up being hokier than a simple heel DQ title change.

The Miz threw Ambrose into the referee late after Maryse was kicked out of the match. Ambrose was begging the referee to not DQ him and walked into the Skull Crushing Finale. I think I would’ve rather Ambrose saved some face and lose his Intercontinental title by DQ instead of being outsmarted by the heel. Neither finish helps your babyface stay strong, but then again, WWE can’t book babyfaces to save their lives, with Bayley as example number one.

She looked like the biggest idiot on planet earth by hesitating to use the kendo stick on Alexa Bliss in a kendo stick match. What did she think it was there for? I sure hope this is just a long setup for Bayley to become someone who becomes unraveled and uncontrollable. Because I’m not sure anything else would make logical sense.

How’s this for a segue way? In something else that doesn’t make logical sense, the tag team cage match is always a letdown. The rules don’t make sense if there aren’t pin falls and it’s simply a race to leave the cage. It hurt the Hardy’s match with Cesaro and Sheamus, even though there was good action. I just couldn’t shake the idea that the smart move in a match like this is for the babyfaces to beat up one heel so badly that they could just toss him out and lock him out of the cage before beating up the other and then leaving the cage together. At least the fans got to see Jeff Hardy jump off the top of the cage.

Rich Swann and Sasha Banks got some TV time and they danced together. Sasha doesn’t have great rhythm and seems slightly out of her element.

The show was a thumbs down to me before the main event. If you haven’t watched yet, skip right to the main event. Watch the Fatal 5-Way and then find a way to watch Will Ospreay vs KUSHIDA in the finals of the Best Of Super Juniors from this weekend.