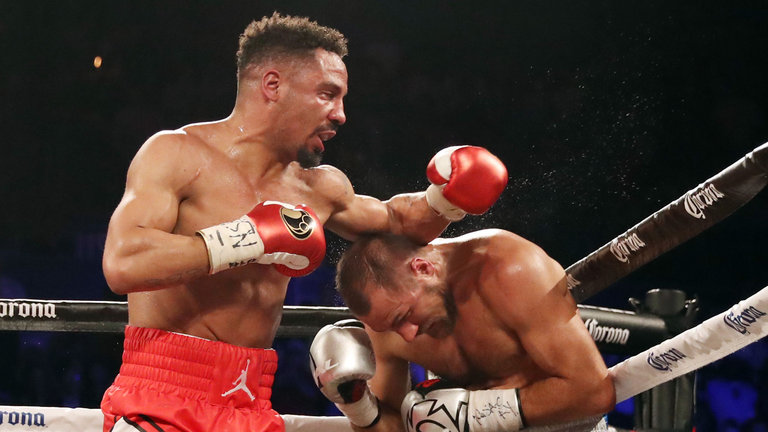 On Saturday night, Andre Ward and Sergey Kovalev squared off again with light heavyweight title belts on the line. Camp Kovalev thought they were robbed in a close fight the first time; one in which Sergey said he ran out of energy in the fifth round. Camp Ward thought Andre did what he does best; out-strategize and out-tough his opponent.

Duan and I previewed the fight Friday night on the Fight Game Podcast.

At the end of their fight on Saturday night, Ward was superior again, though Camp Kovalev still believes they have something to complain about.

Throughout the fight, Ward was going to the body. In some cases, his punches were right on the belt. Others looked just below that mark. Kovalev sold many of them as low blows. But in the 7th, he tried to sell another one, but referee Tony Weeks didn’t buy it.

But after looking at the replay of the shot that ended the fight, I can see where Kovalev has an argument.

If referee Tony Weeks had seen that shot as low, rather than as a crushing body shot that ended the fight, he probably halts the fight and gives Kovalev a breather.

The correct call for me would have been for the official to give both men a warning without breaking the action. To Ward, you say, “Keep those shots up or I’ll take a point.” To Kovalev you say, “Sergey show me something or I’m going to stop it.” If Kovalev doesn’t respond, then you halt the fight. If Ward goes low again, you stop the action and deduct a point. That diffuses any controversy.

As far as stopping it where he did, Weeks is also on the hook a bit because the shots Kovalev was getting hurt with were body shots. Maybe Weeks’ fear was that Kovalev was going to start protecting low, and it would’ve opened up the head for Ward. Ward started the barrage with a straight right that wobbled Kovalev.

Here's the stoppage of Ward stopping Kovalev in the 8th pic.twitter.com/QnS5Y7pZ4u

I feel a little bit more judgement could have been used here (during the stoppage). Kovalev wasn’t in danger of being injured. This is a guy who has never been stopped in his career, he hadn’t taken a beating in the fight, and there was a question over the legality of the punches. If he was in a similar position as a result of head shots, I would have felt very differently, but as things were, in a fight of this magnitude, I think you have to give him more of an opportunity to prove he can continue.

We both think that Ward had his number and Kovalev was probably eventually going to be stopped. And there’s very few harder jobs than trying to gauge when someone is just hurt and when someone is in danger of being in real trouble. Weeks had to make that decision when it looked like Kovalev wasn’t defending himself. Throw in the early belt shots and ones that may have been slightly low, and look at the last blow that ended the fight and you feel bad for Kovalev having to go out that way. He probably was going anyway, but it was a close fight and he should’ve had an opportunity to go a bit longer.

WWE Post-WrestleMania: What’s next for Roman, Bianca and Charlotte?

Brace for IMPACT: The REAL Cardonas have arrived