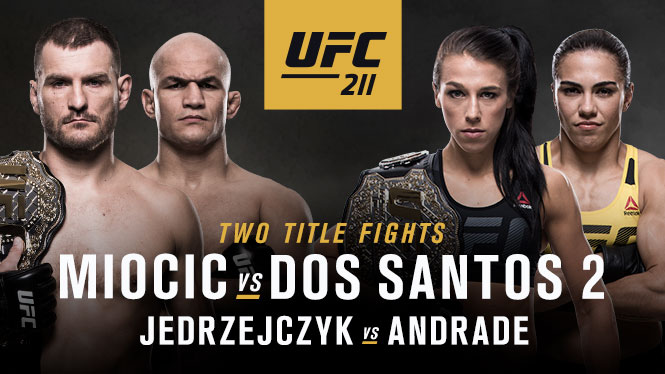 Hang out with us for your UFC 211 live coverage.

While most of the MMA world is still talking about Jon Jones admitting to doing cocaine before beating Daniel Cormier, there is still a big show today with some great fights.

Jon Jones told Daniel Cormier at the presser: 'I beat you after a weekend of cocaine." pic.twitter.com/L9GiKLS8IU

Here are the FGB predictions for the 5 main fights on the show:

We’ll be back later for the event.

The worry is that the McGregor fight took a lot out of Alvarez. But he’s such a gamer that you’d hope it was just a bad fight for him. Poirier is definitely longer. Alvarez was able to feint early to throw Poirier off-balanced. Poirier was landed some nice shots and clipped Eddie on his chin. But Eddie was hanging in there and made it a close round.

This had the makings of an early 10-8 for Poirier as he wobbled Alvarez and nearly put him out. I’m not exactly sure what kept him up. He took a barrage of shots and I was rooting for him to just go down. But he clipped Poirier and was able to get on offense. Then he took him down and tried to rest. Poirier was down on a knee and Alvarez kneed him, which was illegal. Poirier went limp. We’ll see what happens. I think Alvarez should be disqualified.

The fight was ruled a no contest because Herb Dean thought the knee was accidental.

More of a grinding kind of round and Branch won it. Jotko looked like he might’ve landed low, but Branch shrugged it off like it was nothing. Lots of fighting up against the cage, which limits Jotko’s kicks.

Branch kicked Jotko low, but it just paused the action for a second. It was more of Jotko’s style of round and he probably made it even. The fight is kind of boring and a slog, which should lean toward Branch’s style, but I still have it even.

The third round wasn’t much better. Nothing really happened, but Branch did get a late takedown.

Frankie Edgar put some work on Rodriguez. He had Rodriguez on his back foot immediately and was getting inside. He landed some punches and Rodriguez threw a sideways elbow that landed. But Edgar then got a takedown and landed some vicious ground and pound for more than half the round. Rodriguez got up when the round was over and his face looked like he’d been in a car accident.

Edgar got another takedown immediately, but this time, Rodriguez maneuvered into a kneebar and Edgar struggled to get out of it for a bit. But soon thereafter, it was more of the same with Edgar bombing him with shots and elbows on the ground and Rodriguez’s face and swollen eye taking all the punishment.

The referee stopped the fight because of Rodriguez’s eye.

Maia had about 4:30 of the round. He jumped on Masvidal’s back and rode him while trying to get Masvidal to give up his neck. Masvidal took some punches while standing up, but nothing really hurtful. Masvidal got him off his back near the end of the round and landed a few punches before it was over.

Masvidal started great in the round. He kept his distance and stuffed everything that Maia was trying to do. But Maia eventually was able to get him back down and try and work for submissions. He didn’t really get close to anything.

It took Maia until 2:27 to get the takedown and he immediately went for the choke. He had his forearm underneath Masvidal’s chin at one point, but his angle was bad and Masvidal just shook him off. Maia flattened him out and had his back, but couldn’t get the choke in. We’ll see what the judges thought. Weird fight to score.

Joanna is very quick with both her hands and feet. Andrade is a gamer though and keeps moving forward. She took some punishment, but also got two takedowns and left a hematoma on Joanna’s forehead. That was Joanna’s round.

Andrade takes three punches to the face in order to try and get inside and possibly land one. It wasn’t a good strategy, though she did land a couple, one in which put Joanna down, but it was more because she was off-balanced as it was like a punch and a takedown. Andrade’s best shot is with her wrestling and when she does get inside enough, she’s spending a lot of energy to try and take down Joanna. Joanna’s balance, even on one leg when she’s fighting the takedown, is amazing. Joanna’s peppering her with low kicks, but her hands are too quick.

Joanna was like Floyd Mayweather in round three. She was moving to her left, throwing short hooks, and then moving exactly when Andrade lunges at her. Andrade never really had a shot at taking her down.

Andrade had a shot to take her down, but Joanna was right back up. Joanna is still putting together her strikes brilliantly. She threw a jab out just to hide her kick behind it and she blasted Andrade with it. I have Joanna winning all four rounds so far.

Andrade was able to land some big punches in the round and Joanna’s face is crazy swollen, but Joanna’s strikes were too many. My favorite punch of the whole fight was Joanna moving away, but stopping to throw a straight right hand while Andrade thought she needed to lunge. It was great timing.

JDS started with leg kicks and they seemed to bother Miocic. He was limping early. But he kept chasing dos Santos and was landing his right hand. Miocic landed a punch and might’ve hurt his hand. But then he landed another right hand with dos Santos’ back against the cage and dropped him. JDS went down and he followed him to the ground and finished him.