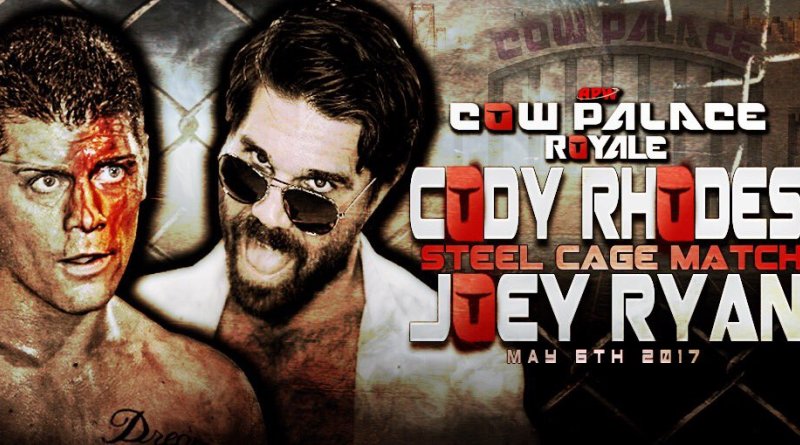 
On Saturday, May 6th, California based All Pro Wrestling brought professional wrestling back to the Cow Palace.

The Cow Palace is the Bay Area’s historic venue, hosting Prince and the Beatles, as well as the Golden State Warriors who were the San Francisco Warriors back in the 60s and early 70s. Wilt Chamberlain, Nate Thurmond, and Rick Barry all played there.

The Cow Palace hosted a few WWE shows here and there in the past 10 years, but Shire last ran the Cow Palace in early 1981, making it over 36 years since local pro wrestling was at the building.

I attended a Fan Fest at the Cow Palace in 2007, which was a terrible event. There was a lot of talk in the past about the building being closed down, but alas, it’s still standing.

The show was a big success, drawing close to 3,000 fans according to Dave Meltzer’s Wrestling Observer Newsletter.

It was funny seeing some of the reaction of folks on social media who didn’t think there were that many fans in the building. They either didn’t realize how large of a venue the Cow Palace is or understand that 3,000 fans is a huge crowd for US independent wrestling.

Even though the show was over three weeks ago, I wanted to write about it since it was such a memorable night for most. The action was solid throughout the entire night. The show was able to not only entertain the local audience, but also make sure to have enough on the show that casual fans would enjoy.

The night was kicked off with the Cow Palace Royale, which was a head nod to the old Roy Shire battle royals which were huge draws for the territory.

The battle royale was more like a combination of WWE’s Royal Rumble match and Lucha Underground’s Aztec Warfare match.

It was a long match as the opener, but had enough excitement to keep the fans interested. You got to see a lot of local independent talent, but also former WWE stars like Gangrel and X-Pac.

Luke Perry of Beverly Hills, 90210 fame has a son who wrestles as Jungle Boy. He had a hot, but short run in the match. I kept trying to figure out how to walk by Perry to meet him as he was sitting behind my friend and former Bay Area independent wrestler Dave Dutra. But by the time I decided to go over and talk to Dutra and his family, Perry was long gone.

May the bridges I burn light the way McKay.

Local favorite Jacob Fatu beat Willie Mack to win the match and hit his patented moonsault off the top rope. Fatu is an insane athlete for his size and already such a solid wrestler.

In the second match of the night, Shotzi Blackheart beat Candice LeRae and Rachael Ellering in a three-way. It had a good pace and after the long battle royal was the perfect length.

Lewis went to school at Mount Pleasant High School in East San Jose, which is also the same high school that I went to. I always always always root for Lewis. He’s a homeboy.

Thanks to Shayna Baszler wrestling for my buddy John LaRocca’s Premier, I’ve got to see a few of her matches as she’s still her early in her career. She is Premier’s Women’s champion which is now also APW Women’s title. On this show, she defended against RAZE, who I’ve seen her wrestle before. The two have really good chemistry and it’s a good mix of styles with Baszler using her catch style and RAZE, her power. Shayna won a nicely contested battle.

RAZE got a kick out of the photo I took of her nailing Shayna with an overhand chop.

JR Kratos, who is one of my favorite local wrestlers, beat Jeckles in a San Francisco Death Match. The match was a culmination of an ongoing feud between the two. Kratos got his revenge by piledriving Jeckles into a bed of thumbtacks.

After the match, The Taskmasker Kevin Sullivan got involved. He was the ringside enforcer for the match.

Pat Patterson and Dylan Drake mixed it up right after intermission. Which reminds me…

I really liked the way that they set up the building. They set up the gimmick tables so that the wrestlers could sell their gimmicks and sign autographs close to the action, but without taking away from what was going on in the ring.

Will Cuevas had a big part in the commercial for the show and was also the Internet champion. He faced Karl Fredericks, an up and comer like Fatu who could be a mover and a shaker on the indy scene. Fredericks won the title, which should catapult him a bit.

You can see that match as well was Kratos vs Jeckles and the tag title match on APW’s weekly YouTube show.

The APW Universal title match was supposed to be Reno Scum exploding like the Mega Powers, but Adam Thornstowe had an arm injury working for TNA. So instead, Luster The Legend defending his title facing off against John Morrison/Mundo, Brian Cage, and Jeff Cobb.

The match was excellent in that it was exactly what the crowd wanted. With it being a four-way, there wasn’t a ton of psychology, but everyone got to hit their big moves and there were many near falls. In the end, Jeff Cobb won the match and looked like he took a second to honor APW founder Roland Alexander in the middle of his celebration.

The main event was Cody Rhodes and Joey Ryan in a steel cage. They wrestled earlier in the year and the fans ate it up. Even though technically, a cage match is supposed to keep folks out, Candice LaRae and Brandi Rhodes found their way in.

Cody hit a superplex off the top of the cage and later won the match.

Rhodes is an absolute pro and there’s a certain polish that he has based on his WWE upbringing. But he fit in perfectly, which says a lot about him, and a lot about the talent that APW has. They have some really good guys on their roster.

It looks like APW is going to run the Cow Palace again later in the year and while personally, I wish they’d only run it once a year like it was their WrestleMania, I understand the decision. It’s a test. You have to see if you can do it again soon and if not, you go back to once a year or once every two years.

Next time though, the nostalgia will be less of a draw than it was here, but they understand that. I’m sure they’ll have some hot matches and stars to help draw that casual audience back.

I know I’ll be back.

Wednesday Night Preview: Mox back in action; Ciampa vs. Thatcher in a Pit Fight