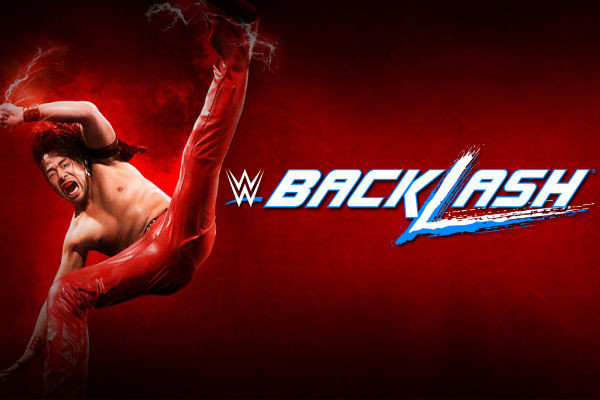 
WWE’s been two for two in excellent shows this weekend. On Friday, they had a UK special which set up a great match between Pete Dunne and Tyler Bates for the TakeOver show. And then on Saturday, TakeOver over-delivered by tons.

Can they go three for three?

What’s weird is that the actual main roster show looks to be the weakest of the three. It’s not because of quality matches as AJ Styles and Kevin Owens should be great and we finally get to see Shinsuke Nakamura wrestle on a WWE PPV.

It’s because there’s a lot of filler including matches with talent that’s not over at all. And the main event features a non-contender as the number one contender for Randy Orton. I have nothing against Jinder Mahal and hope he does well. But on Raw he was a jobber and now on Smackdown he’s a number one contender. Don’t treat me like an idiot WWE.

We’ll have your Backlash live coverage when the show starts.

Dolph’s athleticism worked well for him here. He was able to keep up with Nakamura and be there in the right spot so that Nakamura could do all of his high spots.

Ziggler took most of the match, including hitting the Zig Zag for a nearfall. Nakamura hit all his moves and then the Kinshasa the win.

For those expecting a great Nakamura match, you got the Nakamura paint by numbers match.

Breezango Vs The Usos

This was whacky, but not in a good way.

There was a skit before the show where Tyler Breeze was dressed as a janitor and he came to the ring in the same getup. They wasted about 5 minutes with Breeze using a mop against the Usos. No idea why the referee just didn’t take it away from him.

Breeze then put on a grandma’s wig and a dress and wrestled like that for a bit. Breeze hit the Unprettier on Jey for a two count. But it was the only drama of the match. Jey pinned Fandango after a super kick off the top rope.

This was a weird one. Corbin took most of the match like he was going to win it strong with Zayn’s hope spots. And then, Zayn won.

Early in the match, Zayn couldn’t get Corbin up for the exploder suplex. Corbin was doing his bully spots, but then went for Zayn hit a kick in the corner and then the Helluva kick and pinned Corbin out of nowhere.

Surprisingly, Natalya won with the Sharpshooter on Becky Lynch. Becky had Natalya in the Disarmer, but Tamina interfered, allowing Natalya to put her in the submission.

Kevin Owens won by countout in a good, but not great match. The finish was pretty creative. Styles had Owens on the announcer’s table looking to hit the Styles Clash. As he was setting up the move, his foot got stuck in the hole where the monitor sits. When he pulled his foot out, it was tangled in wires. Owens went back into the ring while Styles was counted out.

Styles had a bad knee in the match and sold it well, including getting knocked off balanced in his Phenomenal Forearm spot.

The crowd was so dead for this. Harper got the win with two super kicks and a spinning elbow. Both guys are big and their offense looked tough, but the crowd didn’t care.

Earlier in the show, Jinder did a solid interview that the crowd was into, but then shit on by the end.

Jinder is your new WWE champion. It was a decent back and forth match, but nothing special. The crowd was into it in the beginning, not so much when we went to wristlock city, but it picked up in the end.

The Singh brothers got involved and Orton suplexed them over the announcer’s table like they were children. One of them fell on the back of his head.

They were back in the ring and Orton gave them a double draping DDT. Jinder snuck behind him and hit the Cobra Clutch slam for the win.