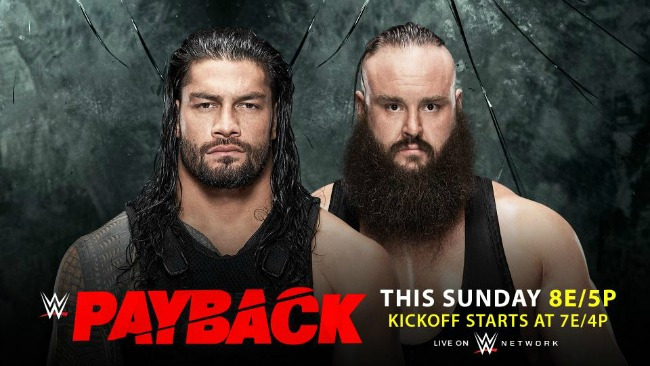 This is a WWE Raw “exclusive” special event even though two of the main matches feature Smackdown superstars. It’s also the first PPV/special event in San Jose in 10 years. I think I was at that one as it was The Great American Bash featuring John Cena vs Bobby Lashley as the main event.

This was a better match than their WrestleMania match. It told a better story and it was pretty much all action.

Surprisingly, Jericho won with the Walls of Jericho.

He had it on Owens earlier in the match and Owens used his finger to grab the ropes. Jericho went on to injure his hand so that the next time he was in the Walls, he couldn’t extend his hand to grab the rope and break the hold. He had to tap out.

Jericho is supposedly leaving to do his Fozzy tour. But with this win, he’s now the US champ and is technically on the Smackdown brand. We’ll see what they do to get the belt off him, unless he’s not taking a lot of time off.

This match had a chance to be better than their WrestleMania match too, but it ended right as it was getting to be really good with Neville grabbing the referee for the disqualification while in the Last Chancery.

Aries had the upperhand to the point that when Neville kept getting up, he was surprised. He went to the top rope possibly to do the 450 splash, but Neville joined him on the second rope and instead, he gave him a sunset flip powerbomb, which led right into the submission. It was sweet.

Seemingly, this means that they’ll do it again with Aries knowing that he nearly had Neville.

Cesaro and Sheamus Vs The Hardy Boyz

Cesaro and Sheamus finally turned heel. But only after the Hardy’s retained their titles when Jeff hit the Swanton on Sheamus who was covering Matt.

At one point in the match, Sheamus punted Jeff right in the face and may have dislodged a tooth. You can see it in the photo below. 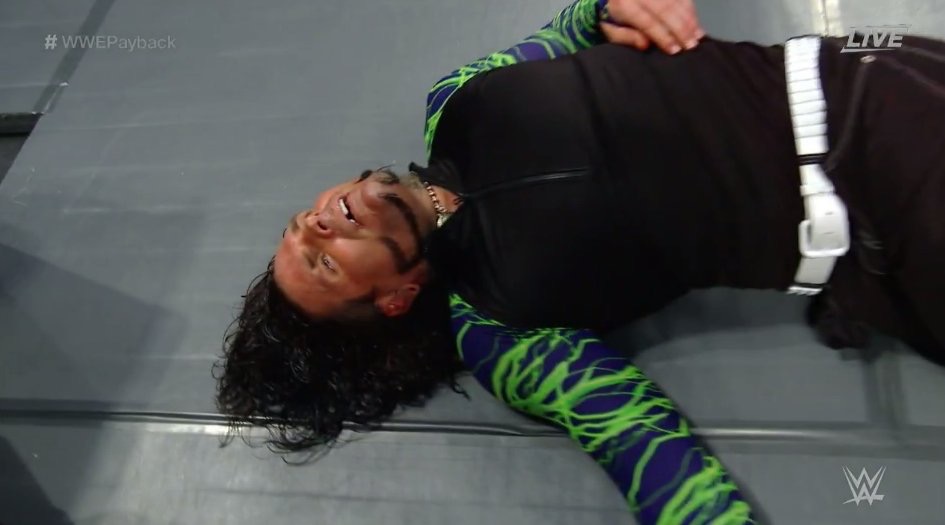 After the match, they shook hands and raised arms. Jeff went to the top rope in celebration and Cesaro jumped him. The heels left them laying, including with Brogue kicks.

This may have been Alexa’s stronger performance and maybe Bayley’s in a few months. There were lots of reversals and counters, so the match was quick with a lot of action. Bayley set up the big elbow from the top.

She had Alexa covered near the corner and bonked her head on the ring post on the kickout. She tried for a small package at one point and Alexa quickly hit a DDT to win the match.

One would imagine Bayley will chase again, but Sasha can chase now too.

The first part of this match isn’t really a match. It’s a movie. Orton entered Bray’s House of Horrors and it was very much like a horror flick, all the way down to Orton looking everywhere for Bray only for him to be right behind him.

If they did this stuff in one take, it was shot amazingly well, but still came off really hokey.

Wyatt left Orton inside the house and left in the limo for the arena. Looks like they’ll do the rest of the match later in the show.

Crowd seemed super deflated after what they saw right before. Supposedly, the arena was changing boring throughout the House of Horrors stuff.

Rollins and Joe was fairly physical, so it worked for the most part. There’s just something about Seth Rollins as a babyface that bores me to tears. Joe took most of the match, working on Rollins’ knee.

He hit the frog splash, but banged his knee on the splash so he was slow to cover Joe who kicked out. Joe got the rear naked choke, but Rollins cradled him for the win. Joe’s right shoulder looked like it was up on the finish.

The limo pulled up and Wyatt walked into the ring. Based on how it ended, Orton was left in the house after a fridge was dumped onto him. Wyatt figured there was no way Orton was able to get back. All of a sudden, Orton showed up in the ring.

Orton was beating on Wyatt until the Bollywood Boys, Jinder Mahal’s friends, jumped him in the ring. Wyatt went for the Sister Abigail, but Orton reversed it. Orton hit the RKO. Then Jinder hit him with the belt twice before Wyatt hit the Sister Abigail and pinned him.

I actually liked this to put heat on the Smackdown title match. I could’ve done without the goofy stuff in the house.

Strowman teased a countout loss, but otherwise, he was in control. He put Reigns away after two powerslams.

After the match, Strowman used the ring steps and slammed them into Reigns midsection. Reigns was bleeding from the mouth and was struggling to walk to the back. He didn’t want to go on the stretcher.

He walked to the ambulance, but had to move out of the way as Strowman was trying to decapitate him. Strowman ran through some boxes. Then Reigns slammed the ambulance door on him.