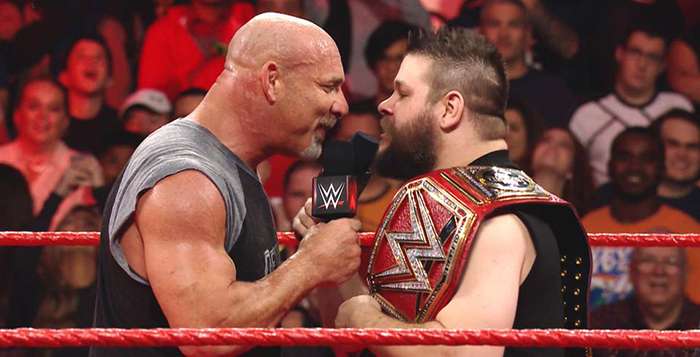 Fastlane should be an eventful show and help nail down a lot of the booking for WrestleMania. For me, there are three big questions coming out of tonight’s show.

1. If it’s expected that Goldberg wins the Universal title, how does Chris Jericho influence the match, if at all. Goldberg shouldn’t need Jericho’s help to beat Owens. But if not, where does Jericho fit? If he jumps Owens after the match, it’s a heelish move rather than what a babyface would do.

2. Is the Undertaker going to show up tonight to distract Roman Reigns? If that match is influenced at all by the Undertaker, he better be there in person or it will be a major letdown.

Just kidding. No one cares about that.

3. After having Bayley win her first Women’s championship, do they go back to Charlotte this quickly so a babyface wins at WrestleMania? And how do Sasha Banks and Nia Jax fit into the main title program coming out of Fastlane?

We’ll be back with those answers (hopefully), and the full play by play later tonight.

Samoa Joe won the match impressively, which saw him on the offensive for the most part. He was about to do a superplex, but Zayn went for a sunset flip powerbomb. He didn’t get it, but knocked Joe of the second rope and went to do a the Helluva kick. Joe caught him in the Urinagi and then the Kokina Clutch for the victory.

Enzo and Big Cass Vs Karl Anderson and Luke Gallows

Cass started out strong, but when Enzo tagged in, a large part of the match was just the Club getting heat on him. The best hope tag was when Enzo dove toward Cass, but Anderson hit him with a drop kick. Finally, Enzo got the tag and ran wild. He tagged Enzo back in to do the Rocket Launcher on Anderson. But Gallows interfered. Enzo dove out on Gallows. He came back into the ring, but Anderson met him with a boot and pinned him. He had a leg on the ropes, but Gallows threw it off.

The story of the match was that Nia Jax beat her from pillar to post, then slipped on a banana peel and Banks got the victory. Well, she won with a rollup. Very hard to believe.

On the pre-show, it was explained that Jinder and Rusev were going to have singles matches, but not against each other.

Jinder came out first, then Rusev came out. They were arguing over who was going to have the first singles match. Jinder booted Rusev out of the ring, so I guess he goes first.

Cesaro hurt his back early in the match doing some of his power moves and it slowed him down. Jinder was able to take advantage of it until Cesaro did a delayed suplex with one arm, since the other arm was protecting his back. He hit Mahal with uppercuts and then the slowest 619. He hit a high cross off the top and Mahal kicked out. Cesaro hit the popup uppercut for the win.

Rusev attacked Jinder after the match. Then the Big Show walked out.

Rusev Vs The Big Show

Show dominated early on, to the point that it looked like it was going to be a squash. But Rusev got the upper hand and got him to the ground with kicks. He went for the Accolade, but Show pushed him out of the ring. He came back in and was hit with a chokeslam. He then pulled the straps down, I guess to make the chokeslam more impressive and he gave it to him again. Then he gave it to him a third time.

Rusev was dusted and sitting in the corner. Big Show then gave him a big right hand to him while he was sitting and finally pinned him.

There were some really cool spots in this match. Gallagher used the headbutt better than it’s been used in WWE in years. He headbutted Neville, who was sitting on the top rope, and Neville sold it like he was dead. Gallagher went for a superplex, but Neville pushed him off and Gallagher nearly fell on his head. Then Neville hit the Red Arrow for the win.

This was the best match on the card so far.

Roman looks like he’s wearing some Nike Roshe boots or something instead of his normal wrestling boots.

This was an excellent big man/power match. Reigns’ selling was excellent all the way through. Strowman wrestled like a big man, so when Reigns finally was starting to take him off his feet, it was meaningful.

Late in the match, Reigns hit the spear, but Strowman kicked out. He tried it again, but Strowman caught him and tossed him back into the turnbuckle. Strowman dove at him but missed in the corner. Reigns hit a superman punch. Then he went for the spear, ducked Strowman a couple of times, and then Strowman just pushed him down.

Stromwan went to the top and went for a big splash off the top, but missed. Reigns hit a spear and pinned him.

Bayley ended Charlotte’s PPV winning streak by beating her with the Bayley to Belly.

The match was a strong back and forth battle where both women got a lot of offense in. Charlotte hit her moonsault, which usually signals a loss. She went to the top to hit it again to the floor, but Sasha Banks ran out.

She chased Sasha around the ring and Bayley hit the Bayley to Belly on the floor. Back in the ring, Charlotte had Bayley in an inside cradle and held the tights. Sasha told the ref about it and he didn’t count the pin. Then Bayley hit the second finisher for the win.

Owens wouldn’t lock up. He kept going out of the ring before the bell rang. Finally, he told the referee to ring the bell and right before the bell rang, Chris Jericho’s music came on. Jericho walked down the ramp slowly. As Owens turned around, he ate a spear, and then the jackhammer.