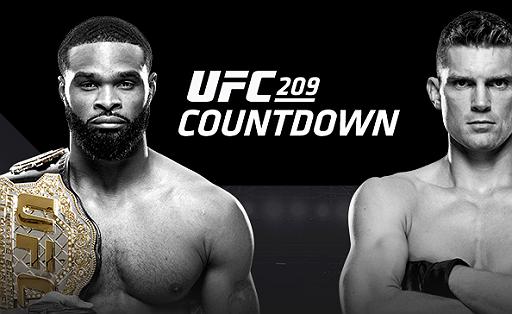 Check out our UFC 209 preview.

It’s been a bit of a slow start for the UFC this year and one that might not speed up from a business side of things until the summer. However, from an entertainment side of things, this card was expected to be stellar, with two great fights at the top.

And then, we got the bad news.

Khabib vs Ferguson is officially canceled, per UFC.

According to Dave Meltzer from The Wrestling Observer, Khabib Nurmagomedov was hospitalized in Las Vegas during his weight cut.

Nurmagomedov was hospitalized in Las Vegas while cutting weight and had until 11 a.m. local time to get on the scales and weigh-in. Doctors wouldn’t allow him to fight and he failed to weigh-in. Given the procedure of putting someone on fluids when issues are with dehydration, it makes it almost impossible in those situations for the fighter to be able to make weight.

The card still has one stellar main event with Tyron Woodley defending his welterweight title against Stephen Thompson. Their last fight ended in a draw. But with Khabib Nurmagomedov and Tony Ferguson fight off, the card takes a major hit.

(Because of the cancellation of the semi-main event, we’re only going to pick four fights from the main card.)

In addition to the FGB crew, included in our picks are John LaRocca, president of Premier, Las Vegas Review-Journal’s own Heidi Fang, our jiu-jitsu expert, Alex Goff, and old friend and many times guest on FGB Radio, Jason Hagholm.

Heidi: Mark Hunt by 2nd round TKO
My theory here is simple. I don’t think Overeem will win unless he takes Hunt down or works him in close quarters. To accomplish either of those things, he’d have to shoot in from range, which usually means eating punches from Hunt on the way in. Overeem is as battle-tested as they come and his chin isn’t what it used to be. All four of his recent losses have been either KOs to TKOs, which so happens to be Hunt’s forte.

Jason: Mark Hunt by TKO
Mark Hunt returns to the octagon feeling he is forced to fight for his family after the Super Samoan filed a civil lawsuit against the UFC, Dana White, and his UFC 200 opponent Brock Lesnar, stating that the UFC knew that Lesnar was on steroids and allowed the former UFC champ to go to the octagon anyway. That will be another battle for another day as Hunt has to face a man who has already defeated him in Alistair Overeem. The Reem came out on the winner’s side against Hunt in 2008 for the now defunct DREAM promotion, winning via armbar. Overeem’s last fight in the UFC was his bizarre title fight against UFC Heavyweight Champion Steipe Miocic. Overeem had the champ rocked a number of times but never went in for the kill and allowed Miocic to comeback and knock him out. Both guys are former K-1 kickboxing studs, but I like Mark Hunt to come away with another walk off KO as Hunt is a rematch fight expert.

Jason: Lando Vanatta by 3rd round submission
Lando Vannata is on the verge of being the people’s new favourite fighter. With just two fights under his belt in the UFC, he has definitely made a statement. Vannata’s first fight in the UFC was against a man who was scheduled to fight for the interim light weight title in Tony Ferguson. Vannata took the fight on two-week notice and had Ferguson on the ropes, winning Fight of the Night in the submission loss. His next fight was just this past December at UFC 206 where he had a highlight reel wheel kick KO on John Makdessi. Teymur is a TUF 22 alumnus who has two finishes with a TKO over Martin Svensson and a KO over Jason Novelli. Teymur, the Swede, will have to bring all his power and maybe ABBA inside the octagon if he wants to beat Vannata. This fight should be electric and could steal the show, but I’m taking Vannata in this one via 3rd round submission.

Jason: Rashad Evans
Rashad Evans makes his middleweight debut after having a whirlwind of health issues where “Suga” was pulled from not only UFC 205, but also UFC 206 one month later. Many questions surround Evans’ health as well as the collapsing of the Blackzillians; Evans’ fight team he founded after feeling betrayed by Jackson’s MMA before he fought Jon Jones. His opponent Dan Kelly has won five of six UFC bouts. He may not be the most exciting fighter for Evans to make his middleweight debut against, but he is a super tough and durable guy who can bring the fight to Rashad if things turn into a scrap. I’m going with Evans though. I think Evans has way too much big fight experience and is an all around complete fighter. Not to discredit Kelly’s UFC opponents, but the biggest win of his career is against Chris Camozzi. I’ll go with “Suga” for a sweet victory.

Duan: Stephen Thompson
I thought Thompson got nearly everything wrong last time and he still nearly won the fight. I can’t see him possibly making as many mistakes this time around. A few small adjustments puts daylight between him and Woodley.

Jason: Stephen Thompson
These two gave one hell of a spectacle at UFC 205 just last November. It was a fight straight out of Hollywood. In the first fight, Woodley really used his wrestling to his advantage and was able to take down Wonderboy with some ease. In the 4th round, T-Wood nearly knocked Thompson’s head off with a cross square in the face and went in for the kill with a nasty guillotine. To this day, I still have no idea how Stephen Thompson got out of it. The fight was declared a draw so we are here now. Woodley was looking for the big money fights against GSP or a Michael Bisping but could not get either. He now has unfinished business with the world class karate fighter. Woodley has amazing power and excellent wrestling but I expect this fight to go the distance again and I’m taking Thompson. I think he learned more from his mistakes in the first fight and will use his angles more to frustrate Woodley and capitalize when Woodley goes in swinging.

When the night is all over you will be hearing “AAAAAND NEW Welterweight Champion Stephan “Wonderboy” Thompson!”

GG: Tyron Woodley by 3rd round TKO
I’m doing a 180 here. I thought Thompson was going to beat Woodley at UFC 205, and I still think that he’s probably the better overall fighter of the two, though I admit that it’s by a slim margin. But there was something about Woodley’s power that was so impressive. I didn’t think he used his wrestling enough in the fight, but a lot of that was probably because of Thompson’s angles and the distance. While I wouldn’t be shocked at all if Thompson beats him, and is impressive in doing so, something tells me Woodley is going to connect more than once and possibly put him away like he was close to doing in the 4th round of their last fight.

We’ll have play by play of the main card up tomorrow.